There’s a battle scene at the climax of The King, where a clump of 15th-century soldiers, both French and English, are physically clashing with each other, forming a blob of destruction and war. The group pushes and pulls against itself, swallowing a main character in its wake. Though visually remnant of the Battle of the Bastards episode in season 6 of Game of Thrones, the scene is a great visual metaphor of the film itself; great individual elements being destroyed by a monotonous whole. As a retelling of William Shakespeare’s Henry IV Parts 1 &2 and Henry V, stark visuals, solid performance, and historical accuracy in the film’s production are swallowed up by a clumsily executed narrative and the unfulfilled legacy of Shakespeare’s most famous history.
The King opens with King Henry IV (Ben Mendelsohn) of England ill and cruel, forging war with one of its own houses and rejecting the eventual succession of his son, Hal (Timothee Chalamet). Known for his sexual exploits, drinking, and distaste of his father and his legacy, Hal spends his days in town, living amongst the people, under the watchful eye of his friend Falstaff (Joel Edgerton). After the death of his father, now called Henry, Hal seizes the throne and tries to lead the country into an era of peace, until his advisors, led by Sean Harris, advise the new king to retaliate against France (represented by Robert Pattinson as the Delphine) and its attempts to rob England of its king. As Henry reluctantly leads his army into war, his inner battle about who to trust and how to weave his own legacy is waged. 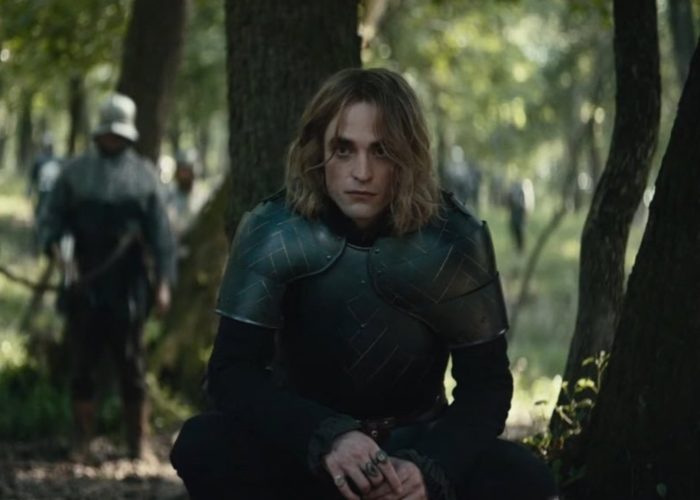 Though Chalamet is up for the task of Hal/King Henry, bringing a maturity and the gravitas that he is becoming known for, the film’s best performances come from secondary characters played by Edgerton, Pattinson and Jojo Rabbit breakout Thomasin McKenzie. Edgerton brings a slightly comedic edge to the human manifestation of Hal’s conscience, meeting a more noble end than its Shakespearean counterpart, the obvious care the older man has for the boy oozing out of every interaction. With a signature long blond bob and a coy smile, Pattinson steals every scene he’s in, bathing every moment in smugness, a French accent just absurd enough to work, and the slight essence of the French knights in Monty Python and the Holy Grail. McKenzie, though severely underused, plays Hal’s younger sister married off in Denmark. In the scenes she is in, McKenzie brings a lightness and warmth to the screen, bringing out a more sensitive and family-oriented side to Chalamet’s Hal.
Written by Joel Edgerton and David Michôd, with direction by Michôd, there seems to be a disconnect between the source material and this rendition’s narrative. Though the way events unfold is satisfying, it is not fully Shakespearean. Falstaff’s character is changed from gluttonous, boastful, cowardly buffoon to a proud, slightly nurturing father figure, and military rogue left behind by Hal at his coronation, remembered as a faithful friend and confidant when led astray by the remaining of his father’s council. Other characters are completely minimized, emphasized or erased altogether. I respect what the film is trying to do, updating the plot for modern audiences and making the dialogue easier to swallow, but by doing so the humanness and the heart Shakespeare inflicted on each word of that script is lost. 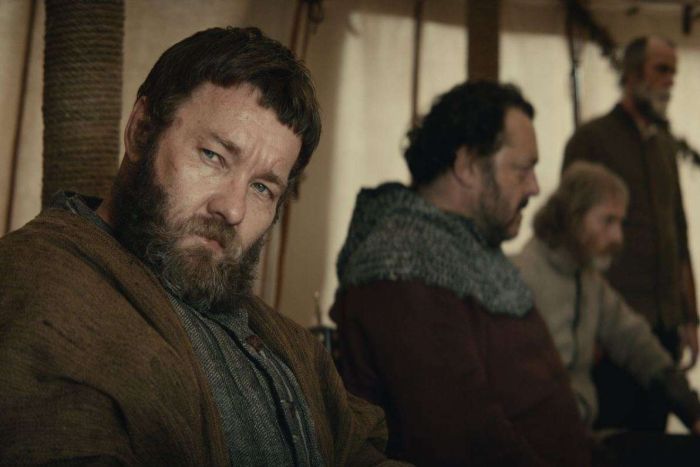 If you are going into this film expecting any semblance of the Shakespearean history, made famous with the line, “We few, we happy few, we band of brothers,” don’t hold your breath for the duration of its 133-minute runtime. As its own contained thing, The King tells the story of a reluctant son trying to forge his country’s own future, separate from his father and council’s own troubled war-filled legacy. There are lines of dialogue that hint to the original text and the main through-line of a young man succeeding his father and leading his army to war with the French, before marrying a French Princess, is the same. It’s still a story of father figures and coming of age, just with its plot elements significantly altered.
Like last year’s forgetful Outlaw King , The King fails to make an impact as a historical epic. Though visually striking, the film fails to take the best from its source material, creating a male coming of age story we’ve seen before.
The King will be streaming on Netflix on November 1st.
Rating: 3 out of 5