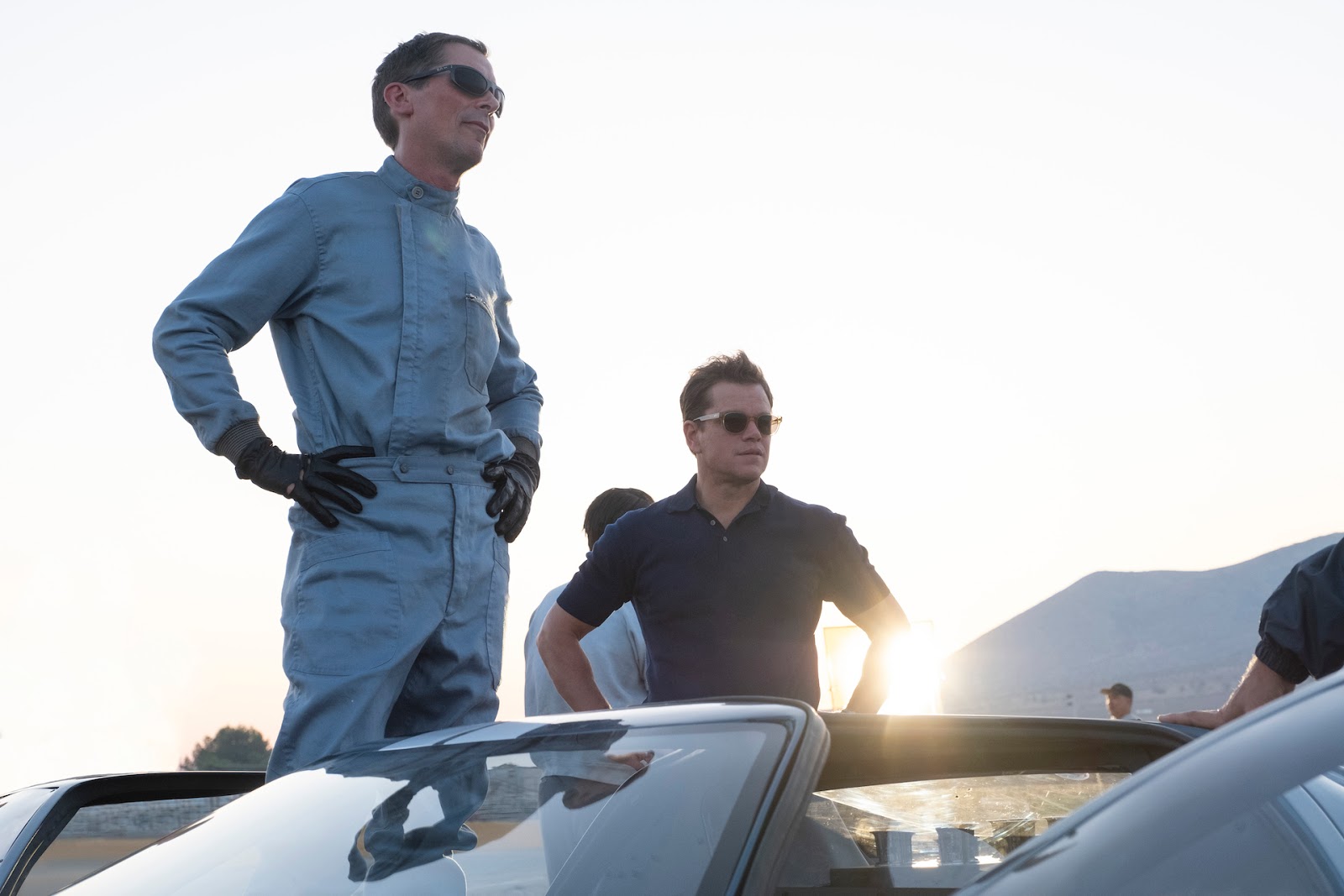 James Mangold makes incredibly good movies. I know, that reads pretty damn simple and probably unbecoming of a critic  to be so inarticulate, but it’s just the truth. He makes movies that are thrilling, easy to understand, demand and get career-best performances, and have a gigantic heart beating in their chest. Whether it’s Logan, Walk the Line, Girl Interrupted, or 3:10 to Yuma, Mangold just gets what makes movies entertaining to a wide swath of audiences.  The point I’m trying to make about his wildly entertaining, thrilling Ford v Ferrari is that, like the hot shot American engineer Carroll Shelby (Matt Damon) hired by Ford Motor Company to design a car fast enough to beat Ferrari, if you want greatness you have to trust greatness. This movie is greatness, and we should just let Mangold go and direct every thing from now on.

Ford v Ferrari is nail-biting, white-knuckle action personified on the racetrack, a surprisingly heartfelt tale of friendship and fatherhood when off it. The engines never stop revving, though, as the stakes feel just as high in the battle for automotive dominance between Ford and Ferrari, the latter seeming invincible in the sport it has controlled with ease for years. The bulk of the film centers on former racer-turned-engineer Carroll Shelby, who is tasked by Ford with designing what would really need to be the perfect car. And to drive the perfect car you need the perfect racer. Well, that’s where abrasive British driver Ken Miles (Christian Bale, superb) comes in. A journeyman who now lives in LA where his auto body shop is on the skids, Miles is convinced, despite some early objections by his wife (Caitriona Balfe), to get back behind the wheel and help Ford reshape their boring public image at Ferrari’s expense.
The story being told is over a half-century old. The details of Shelby and Miles’ efforts to unseat Ferrari at the 1966 24 Hours of Le Mans are well-documented and pretty exciting just to read.  Mangold and his screenwriters, Jez and John-Henry Butterworth and Jason Keller, don’t rely too much on technical jargon about the design of the Ford GT40, but instead center on the competitive spirit that drives Miles and Shelby’s friendship. Both would be considered reckless, unnecessary risk takers in their field, but it’s exactly that attitude which makes them great. It’s also why people continue to put up with them despite some obvious personality flaws; in particular Miles is someone whose attitude hurt his career more than his skills behind the wheel. While the relationship between Shelby and Miles is volatile, there’s respect, admiration, and genuine love between them as they drive one another to be the best.
It’s funny how most racing dramas tend to boil down to one-on-one rivalries when it’s hardly what anybody would call an individual sport. There are entire teams involved and sometimes dozens of racers trying to get the checkered flag. Ford v Ferrari is a little bit different. There’s no single racer that  Miles needs to beat; this is about the race for automotive supremacy between American and Italian car makers. But who wants to watch a movie about a bunch of stuffy corporate execs squabbling in conference rooms when the action we want is there in the driver’s seat and on the track? Mangold effectively shuts any concern about that down in terrific full-throttle moment when Shelby straps CEO Henry Ford II (Tracy Letts) into the GT40 passenger seat and let’s him experience the breakneck speed for himself. The poor guy didn’t know what hit him. Reduced to literal tears by the traumatic experience, Ford not only gets an understanding of the precise control required to command such powerful forces, but how rare it is to find anyone crazy enough to try it.
That said, the corporate hijinks is a little bit overcooked and silly, with Josh Lucas as the smarmy Ford exec who sees Miles as the worst possible public face of the company. Shelby not only has to convince Ford that Miles is the right guy to drive their car, but keep Miles under control before he gets them all fired. There are complexities in the story that keep it interesting when the wheels aren’t spinning.  Punches sometimes get thrown, wrenches get thrown, brawls break out and sometimes Miles’ wife sits and watches them with amusement. Yes, this movie is quite funny, as well, with Bale and Damon barely able to hide the fun they’re having at playing two such colorful characters. They are surrounded by a uniformly excellent cast, including rising star Noah Jupe as Miles’ adoring son, who clearly hopes to follow in his Dad’s footsteps. He’s a witness to this history being made by his father, and it’s a legacy that is being passed down from father to son.
But man, those driving sequences are something else. I think at this point we expect any racing drama to look great and capture the visceral energy of soaring at such unfathomable speeds. With cinematographer&nbspPhedon Papamichael and a crackshot editing team, Mangold’s depiction of the brutal 24-hour Le Mans is as exhilerating as it is terrifying, creating a demolition derby effect as cars spin out of control and explode into scorching fireballs. And right in the center of this four-wheel firestorm is Miles, face contorted into a delirious sneer as he cranks into a higher gear. Marco Beltrami’s brassy score is smartly underplayed so the action is driven (no pun intended) by the sheer thrill of the race itself.

Ford v Ferrari is the kind of satisfying, star-driven drama that we don’t see nearly enough anymore. Mangold’s instincts haven’t failed him; this story isn’t so much about fast cars but the men who dared strive for greatness at the risk of everything. This is a film with a lot of muscle underneath its hood; better fasten your seatbelt!