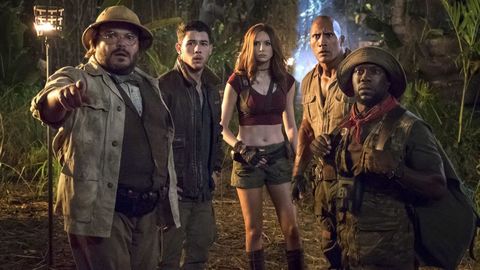 When Sony set out to do a sequel to Robin Williams’ 1995 film Jumanji, it was a risk they couldn’t predict would pay off the way it did. $962M later and it was one of the biggest hits in the company’s long history, and of course has led to another film, Jumanji: The Next Level, which does as the title promises by adding a pair of screen greats in Danny Glover and Danny DeVito.

Dwayne Johnson, Karen Gillan, Kevin Hart, and Jack Black return as video game avatars, only this time a pair of grumpy old men have been sucked into the game world. Unfortunately for Johnson and Hart, they’re forced to play hosts to Glover and DeVito, which from a visual standpoint is just terrific.

Pretty much everybody is coming back for this one, too, and why wouldn’t they? Jake Kasdan is back behind the camera, with young stars Alex Wolff, Madison Iseman, Ser’Darius Blain, and Morgan Turner back in their previous roles. Nick Jonas and Colin Hanks are back, as well, while Awkwafina is a new addition.

SYNOPSIS: In Jumanji: The Next Level, the gang is back but the game has changed. As they return to Jumanji to rescue one of their own, they discover that nothing is as they expect. The players will have to brave parts unknown and unexplored, from the arid deserts to the snowy mountains, in order to escape the world’s most dangerous game.