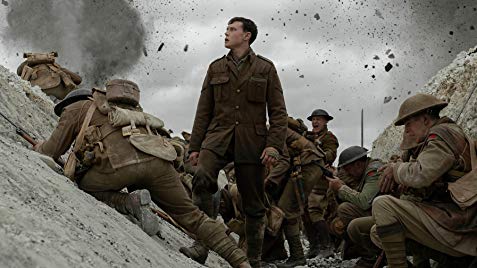 War films have a long, successful lineage when the awards season comes around, and this year Sam Mendes hopes to continue that with 1917. The WWI film has been, I think, flying under the radar as the attention is focused on The Irishman, Joker, Bombshell, and other movies expected to be major players. But a new featurette offers one major feather in the cap of Mendes’ film that could separate it from the pack.

In the new behind-the-scenes featurette for 1917, Mendes talks about the need for this to be a different kind of war movie, one where the story demands a certain level of urgency. And the only way to do that is in one continuous shot.

It’s a monumental task to do an entire movie in one continuous shot like that, which is why Mendes turned to the legendary cinematographer Roger Deakins. Suffice it to say, this will be very different from their previous collaboration on a war movie, 2005’s Jarhead. They also worked together on Revolutionary Road and Skyfall.

Movies that are actually done in one shot are super rare, especially when we’re talking Hollywood productions. The last one I can think of is Erik Poppe’s July 22, preceded by 2014’s Victoria by Sesbastian Schipper. Others, such as Birdman and Bushwick, are edited to appear that way.

Mendes’ 1917 is the biggest movie I can think of to use the technique, though, and the story does seem appropriate. It follows a pair of British soldiers who must cross enemy lines to deliver a message that could save 1600 men, including one’s brother. The film stars George MacKay, Dean-Charles Chapman, Mark Strong, Andrew Scott, Richard Madden, Claire Duburcq, Colin Firth, and Benedict Cumberbatch, opening on Christmas Day.