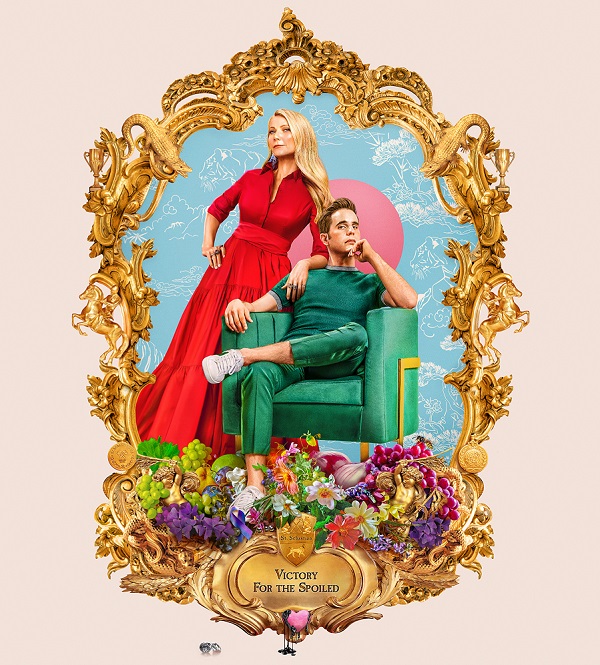 After making such hits as Nip/Tuck, Glee, American Horror Story, Scream Queens, 9-1-1, American Crime Story, Feud, and most recently Pose, Netflix drove a figurative dump truck full of cash up to Ryan Murphy’s house and he signed a 5-year $300 million deal to produce new content for the streaming giant.  Given that Murphy usually produces shows that are fun, dramatic, and wear his politics on its sleeves, fans were looking forward to what his first series we would love to binge.

While the 7th season of American Horror Story dealt with the election of Trump and the idea of political cults, the show was a just a little “too political” and on the nose with the message that he was trying to convey (one that everyone’s now screaming from the hills if you look at your Twitter feed), you could assume that Murphy wasn’t necessarily going to dig into politics in an overt way again.  Well, if you thought that, you don’t know how he rolls.  Murphy’s first show on Netflix is The Politician. 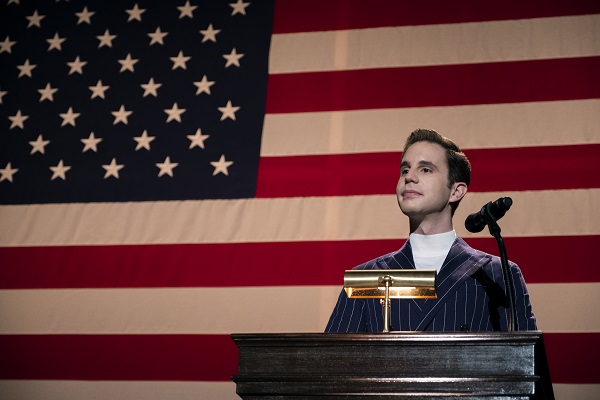 The premise of The Politician centers on Payton Hobart (Ben Platt) a wealthy high school kid in Santa Barbara, who, at the age of 7 decided that he was going to become president of the United States and his single focus in life is to climb up the ladder to eventually become the leader of the free world.  The first season of the show focuses on Payton as he runs for class president as a stepping stone to get into Harvard (as 7 US presidents went to Harvard), and move on towards the oval office.  When we first meet Payton, he’s already displaying narcissistic to near sociopathic tendencies in his lifelong quest for the White House, so it’s no wonder that the voters/high school peers aren’t on team Peyton.  So, his campaign/friends James (Theo Germaine) and McAfee (Laura Dreyfuss), and his girlfriend (and potential future First Lady) Alice (Julia Schlaepfer) plot and plan to ensure his success with all the cutthroat-ness you would expect from Karl Rove, Dave Axelrod, and Steve Bannon bundled together.  Their first plan to make Payton more relatable, so they help him select a Vice-President.  In a cynical and pragmatic approach, they select Infinity (Zoey Deutch), a seemingly terminally-ill student with cancer who will definitely garner some sympathy. 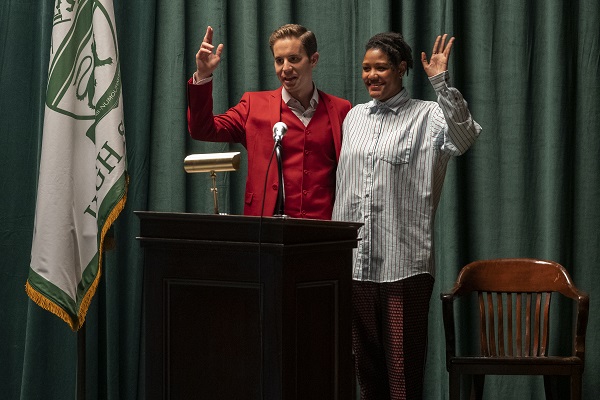 Payton’s opponent Astrid (Lucy Boynton) who after a tragedy enters the race.  While she doesn’t have the grand ambitions that Payton has, she’s still a formidable foil for him as they play politics with each other.  Instead of the cancer-stricken vice president choice, she picks a black lesbian named Skye (Rahne Jones) as her running mate.  Skye is also a welcome addition as she almost immediately knows how to play the game and almost overshadows her president as they go on the campaign trail.  Each camp has their own internal pollsters, debate prep coaches, and they all manage to cut corners and find oppo research on each other.  The Politician shines when it’s doing its satire.  Treating a high school student election with the intricacies of an actual presidential election shows just how media-obsessed and backstabbing our political culture is.  Each candidate jockeys for “the Haitian vote,” which is trying to court the one Haitian person in the school, showing how politicians desperately fight over different demographics.  There is an episode that strictly focuses on one student called “The Voter” who goes through his day being courted for his one vote in the most desperate ways by each campaign, symbolizing how our own political process constantly goes for the “undecided voter,” who couldn’t care less about the issues.  On the show, The Voter just wants to find a place to safely masturbate in peace without politics all in his face, even the bathroom isn’t sacred!

Like such shows as Veep and House of Cards, The Politician delves us into a world with a win at all cost attitudes across the board, especially as the candidates’ families are just as nasty.  Payton’s mother Georgina (Gwyneth Paltrow) is sort of an exception to this rule at first.  Payton’s her adopted son, while her actual sons Martin and Luther (twins Trevor and Trey Eason) ham it up in their douchiness towards Payton being an “outsider” and not worthy of the family’s immense wealth.  Murphy either modeled them after the Winklevoss twins, or (most likely) Donald Jr and Eric Trump as they are just as annoying as their real-world counterparts.  Georgina’s in a loveless marriage with Payton’s super-rich father (Bob Balaban) that gets tested when she meets a new love interest with a surprise cameo by Martina Navratilova (who REALLY can’t act well).  Astrid’s parents consist of a “hooker-turned wife” (January Jones) and her mentally abusive/obsessive father (Dylan McDermot).  But of course, the real MVP parent is VP candidate Infinity’s grandmother Dusty (Jessica Lange), who sees this campaign as a stepping stone for her grandchild for fame (and free stuff).  Lange once again shows that she’s a true force of nature acting-wise as Dusty has a serious mental problem that threatens the whole enterprise. 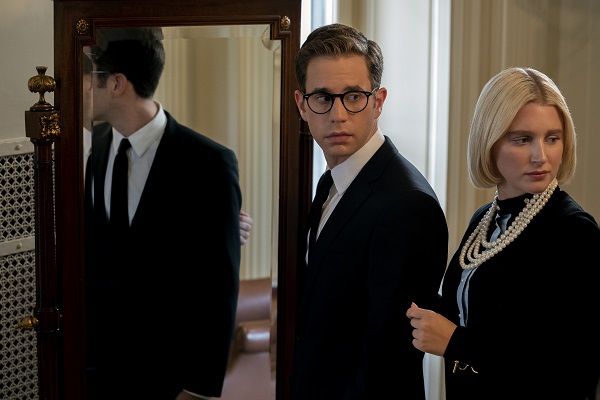 Like many seasons of Murphy’s American Horror Story, the show falls on its face towards the end of the season as things get even more crazy and twisty.  Look, our real-life politics could be written for an HBO or Netflix drama easily as our daily headlines are a mess given our current president’s antics, but some of the juiciness and the twists and turns seem to come out of left field and not necessarily feel like they are earned in the process.  For some reason, Murphy just isn’t done with his love for Glee either as there are a few musical numbers done throughout the season.  You don’t cast Ben Platt (of Book of Morman and Pitch Perfect fame) as the lead, and not have him sing a song or 3.  The game-changer comes in the final episode in which we are introduced to Dede Standish (Judith Light) and her colleague (Bette Midler) that we get a tease for what’s to come in the eventual second season in which the gloves will be coming off.  Overall, The Politician has great satire, a few unnecessary twists for twist’s sake, and a bunch of unnecessary solo songs, but it does a great job of holding a mirror to our current political process and how absurd it is.