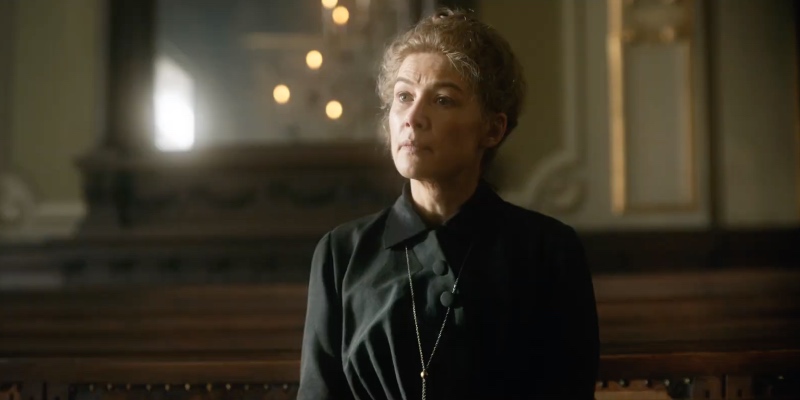 Although she’s only been nominated for one Academy Award, Rosamund Pike is someone who is always in the conversation when this time of year comes around. The Gone Girl and A Private War actress has played many real-life historical figures, and in the TIFF Closing Night film Radioactive she plays renowned scientist Marie Curie, the first woman to ever win the Nobel Prize.

The reviews for Radioactive have been coming in throughout the day and so far the response has been very good. It’s easy to see why, not only because Pike is an amazing talent, but because of the others around her. Joining her in the cast are The Witch‘s Anya Taylor-Joy, Control‘s Sam Riley, and The Goldfinch actor Aneurin Barnard. Even more promising is writer Jack Thorne, already in the awards season discussion for The Aeronauts, and director Marjane Satrapi, best known for films such as Persepolis, The Voices, and Chicken with Plums. Wow.

SYNOPSIS: Marie Curie is the only person ever to win the Nobel Prize in two different fields, physics and chemistry. Though she opened the door to understanding some of the most potent forces in the universe, her century-old story endures in another sense: she was a brilliant woman fighting simply to be heard, to claim her rightful place beside, not behind, her husband. In Radioactive, as played by Rosamund Pike (Gone Girl, TIFF ’18’s A Private War), Curie is a woman with an unmatched mind, a clarion voice, and her own eternal fire.


When she lands in Paris from Warsaw at age 24, Maria Sklodowska is passionately curious, but impatient with lesser minds. Meeting the more established Pierre Curie (Sam Riley) could be her salvation, but Maria — now Marie — proves disastrous at flirting and small talk. Yet even as the two argue, they recognize a mutual attraction. Soon Pierre and Marie agree to not just work together, but to marry. As they push their scientific investigation forward, the Curies unlock forces far beyond their control.


Radioactive will be released by Amazon Studios in 2020.