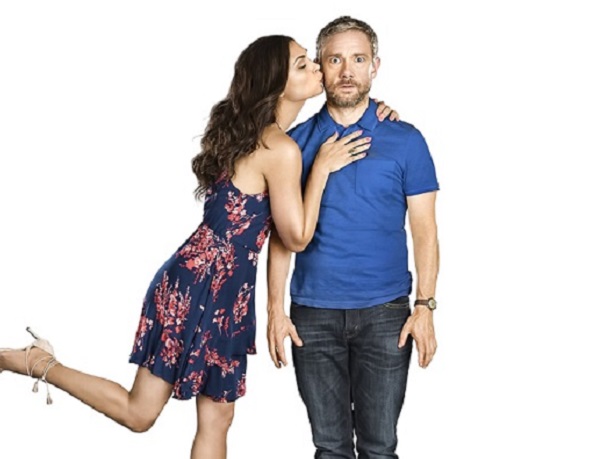 Imagine having to say that to yourself out loud (or something similar) every day in order to remain “happy.”  That’s part of Charlie’s (Martin Freeman) routine every day in Ode to Joy as he suffers from cataplexy.  This all too real disease is a form of narcolepsy, where the body shuts down completely and one falls asleep whenever a person feels strong emotions.  Charlie’s trigger just happens to be happiness.  Watching kids play in the street?  Pass out.  A father holding his baby?  Pass out.  While managing it proves difficult, he has a system: he listens to awful morbid goth music on his headphones while muttering things to himself that would make anyone else depressed, on his way to his non-eventful job at the local library.  While life isn’t exciting, he’s content with it. 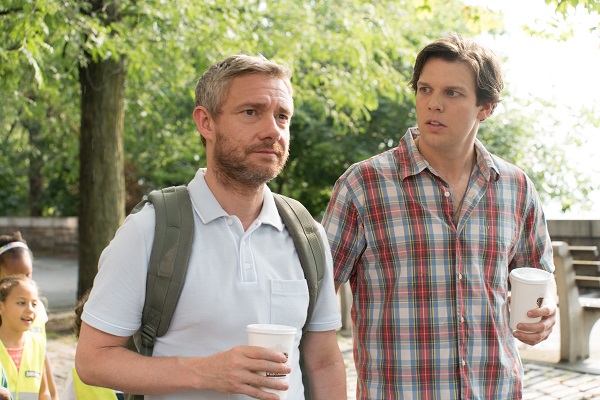 That is, until he meets Francesca (the always radiant Morena Baccarin) who is having a hellish time with her boyfriend (who took her to the library to break up with her just so that she wouldn’t get loud and flip out) as well as dealing with her sick aunt Sylvia (Jane Curtin) who’s going through cancer.  For some reason, Charlie is captivated by her and helps her deal with her situation with her soon to be ex-boyfriend and starts this boy meets girl situation.  Charlie knows he really can’t date her as he’ll pass out as soon as his emotions go above “dull,” but he decides to go on a date with her.  As expected, the moment happiness creeps into the date, he has an unfortunate accident.

Realizing that Francesca will always trigger his cataplexy, Charlie decides the best (and safest) option is to cut it off, but he can’t help but already have some feelings for her.  For some reason, he recommends to her to date his brother Cooper (Jake Lacy).  At first, this seems to be in order for Francesca to move on from both her boyfriend and him, but Charlie still wants her around, just in a way that won’t excite him to pass out while walking on the stairs.  This allows a semi-three-way to develop.  To make matters even more complicated, Cooper sets Charlie up with Bethany (Melissa Rauch) a waitress who works at the same bar as Francesca, and she’s very comfortably boring for Charlie.  The film goes through many of the troupes of the traditional Rom-Com: boy meets girl, boy dates girl, boy loses girl, they date other people, they get back together.  What separates this is that each actor is charming as hell, which ends up saving the film.

I can’t but help how real people with cataplexy would feel about the film.  While the film is based on Chris Higgins’s “I’ve Fallen in Love and I Can’t Get Up,” which was told on This American Life, turning the disability into many comedic moments, like disrupting his sister Liza’s (Shannon Woodward) wedding by passing out when he’s happy for her and other outlandish scenarios.  It’s a dangerous condition to have that potentially disastrous consequences, and real-life people who deal with it probably won’t find it that funny.  Ode To Joy tries to balance the comedic elements by informing the audience about the disability and Martin Freeman plays it with seriousness (at times), but it still seems to poke fun at it more than not.  That said, the performances by the cast are all heartfelt, and it wraps the story up in a nice bow.