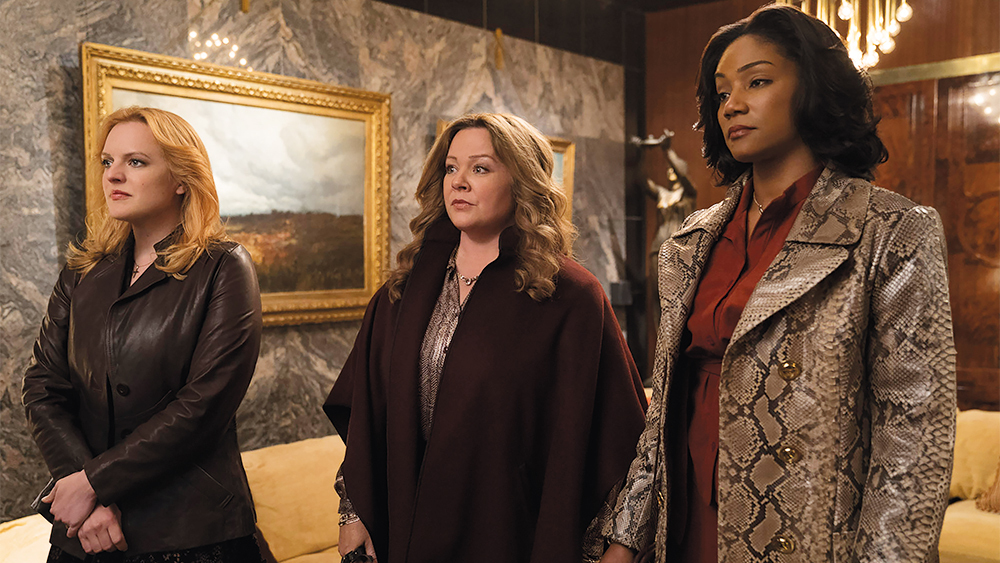 Racism and sexism course through the mafia genre like spilled blood after a turf war, but rarely have we seen them be as central as in The Kitchen. The directorial debut of Straight Outta Compton writer Andrea Berloff, it’s a little like the gritty, street-level cousin to the too-polished Widows, with female empowerment a central theme. It’s the dirt beneath this movie’s nails, along with a quartet of intense performances, that make this the cappo to that similar crime film.

The Kitchen is based on a comic by Ollie Masters and Ming Doyle, boiled down effectively for the big screen.  Melissa McCarthy, Tiffany Haddish, and Elisabeth Moss play mob wives Kathy, Ruby, and Claire respectively, who are left abandoned by their “family” when the FBI arrests their somewhat moronic husbands (Brian d’Arcy James, James Badge Dale, Jeremy Bobb) after a blown heist. In 1970s Hell’s Kitchen there aren’t a lot of opportunities for women that don’t involve working corners, but it’s worse for wives and mothers. With nothing left to lose, the trio decide to take up the collections and protection racket for themselves, an act which pisses off the boss Little Jackie, but gains them the kind of power and money women are rarely afforded.

As they say, “more money more problems”, and enemies quickly begin circling. Actually, everything happens quickly in The Kitchen, which is one of its major issues. Particularly in the beginning, Berloff’s script and the rapid editing by Christopher Tellefsen skates over crucial details. We’re barely allowed time to let the misogyny and racism of the era sink in before skulls are getting cracked. In the case of Haddish’s Ruby, she’s dealing with being an outsider among outsiders as a black woman married into the Irish mob. The isolation she feels is a serious motivator to some of her later actions, but because that aspect is only vaguely explored it falls flat.

While this is definitely an issue that Berloff never truly overcomes, the bulk of the film is fresh, exciting, and extremely violent. Bodies get literally sent up the river at a surprising rate, with blood spilled quick and sudden. After a slow start, things pick up with the arrival of Domhnall Gleeson as Gabriel O’Malley, a psychotic Vietnam vet who returns to town and becomes the trio’s muscle. Gleeson’s skinny frame doesn’t make him a natural choice to play a violent hitman, but it’s also why he proves so effective in the role. He’s unexpected and enigmatic, and the chaotic relationship he forms with Moss’s Claire would make for an amazing Bonnie ‘n Clyde/True Romance-style thrillride.

Echoes of The Godfather and The Sopranos come through as being leaders of a violent crime ring interferes with family life, and the tension only ratchets up when others come looking to steal power. While we expect double-crosses in just about every crime film, female bosses face threats on the outside and dangerously close on the inside. While The Kitchen is by no means as textured as the previously-mentioned mob classics, it offers a rich perspective on how women of the time would survive in such a male-dominated pit of vipers. For Ruby, it’s not just about survival but about hard-won respect, which she earns from her mother who “beat the soft” out of her as a child. Kathy is the maternal one, who works to protect her kids and earn her blue-collar dad’s respect. Moss’s Claire is the most interesting one by far. Abused most of her life, including by her husband, Claire’s turn for the dark side springs from within, and when she hooks up with the equally disturbed Gabriel…well, nobody’s safe.

The Kitchen never cuts to the bone of its larger themes, and eventually buckles under the weight of one too many plot twists, but it’s a crime drama with balls and that’s more than can be said for others that aspire to be the don.