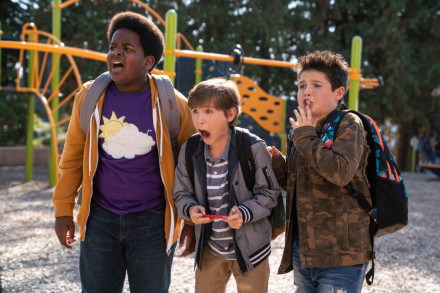 High school may be a war zone, but don’t sleep on middle school. It’s at least a very violent game of dodgeball. Good Boys has been leaning pretty hard that we’ll want to see the adorable Room and Wonder star Jacob Tremblay dropping F-bombs and talking about sex. Well, they’re right. It’s pretty Goddamn funny to watch him and his fellow sixth-grade pals in a rude and lewd adventure too much for their little brains to understand. Think of Good Boys as the pre-middle school Superbad, imparting many of the same pearls of wisdom about growing up, only with a lot more dildos, drugs, and sex dolls.

Good Boys plants its feet firmly in R-rated territory right from the start, while preparing you for a Tremblay you’ve never had the pleasure of seeing before. The 12-year-old star plays Max, and when we first meet him he’s excitedly saying “Fuck yeah!” at converting his World of Warcraft avatar into an orc with giant boobies. He’s right at that age when girls are starting to matter, and his crush on classmate Brixlee is occupying his mind. Following the required embarrassing sex talk with his father (Will Forte), Max hangs with his pals in “The Beanbag Boys”: wannabe cool kid and talented singer Thor (Brady Noon), and embarrassingly innocent Lucas (Keith L. Williams), who is grappling with his parents’ (Retta and Lil Rel Howery) impending divorce. In a heartbreaking moment that, I have to admit is still sorta funny for all the wrong reasons, a joyous chorus performance of “Walking on Sunshine” is brought down by a tearful Lucas who comically flees the scene.

There are a lot of moments like that in Good Boys, which are equal parts raunchy, dumb, and sweet.  Their day-long predicament is just such a case, beginning with Max being invited to a party at the cool kid’s house, only to have to sadly face his pals who didn’t get an invite. But he sticks up for them, because that’s what Beanbag Boys do, and it works. However, it’s a kissing party, and while they may be Beanbag Boys 4 Life, they don’t know the first thing about girls and definitely not about kissing.  To be fair, they do try to learn through the Internet, which goes disastrously wrong in a Porhub kinda way. Later attempts involve a running gag with a sexy CPR doll, and spying on two teen girls (Molly Gordon and Midori Francis) with Max’s father’s prized drone. The girls promptly snag the drone, forcing the boys to steal their medicine bottle full of molly in hopes of an exchange.

The cat-and-mouse game between the boys and girls is perhaps the weakest part of Good Boys, often devolving into tired chase sequences that feel out of place. But the miscommunication between them does lead to some hilarious scenes, including a paintball fight inside of a packed frat house. Good Boys is at its best when the trio are together just trying to have fun, and work through their various issues without really understanding what those issues are. Max’s attraction to girls, which his pals are clearly not ready for, leads to some truly funny bits about female consent. It’s a lesson the boys learn the hard way, but once they learn it, they do what kids who’ve learned something new always do, which is apply it with reckless abandon. The boys’ immaturity is most often manifested in miscues regarding sex, whether it’s what a tampon is used for or the variety of sex toys they keep misidentifying as playthings.

If Good Boys were simply about underaged kids swearing a lot, this would be a pretty forgettable movie, but first-time director Gene Stupnitsky – along with co-writer Lee Eisenberg, go deeper than that. Like Superbad, Booksmart, and dozens of other movies before, it’s really about growing up and finding one’s own path through life, or in this case, middle school. That you can be an individual and still be the person your friends need is a lesson all of us have to learn at some point, and Good Boys makes it with a surprising amount of heart.

Most of the film’s success relies on its talented trio of stars. Tremblay finally gets to spread his wings, just a tad, by using his innocent persona for the dark side, so to speak. Williams, who looks like a high schooler compared to his diminutive co-stars, has the likable personality and inscrutable delivery that could make him the next Craig Robinson. Together with the devilish Noon, they make an irreverent group perfect for the style of comedy preferred by producers Seth Rogen and Evan Goldberg.

Parents may be hesitant due to the richly-deserved R-rating, but they should consider taking their pre-middle school kids to see Good Boys. Not only is it one of the funniest movies of the year, but drops some knowledge about what to do, and definitely what not to do, when life starts to change.