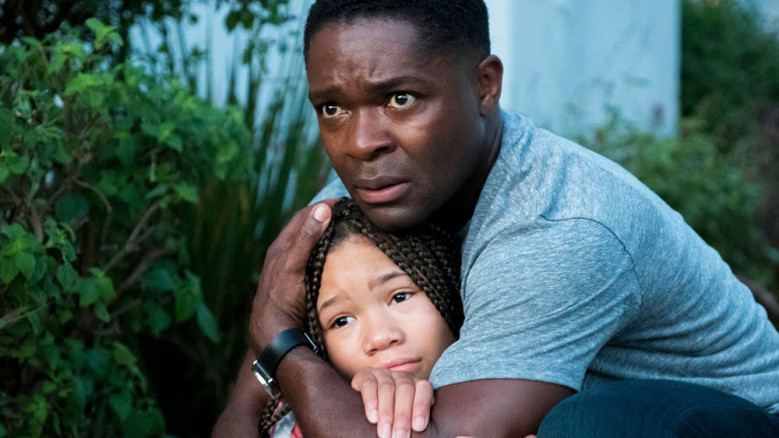 NOTE: This is an edited repost of my review from the Sundance Film Festival. *

If you’ve seen the 2000 Jim Caviezel/Dennis Quaid movie Frequency you might feel a bit of deja vu with Don’t Let Go (formerly titled Relive), the latest thriller from Blumhouse. Debuting earlier this year at Sundance, it’s a film with all of the pieces to be engaging and thought-provoking, but writer/director Jacob Aron Estes fails to find the right mix of genres to make the best use of a promising premise and stellar cast.

Part twisty time travel adventure, part crime procedural, Don’t Let Go stars the great David Oyelowo as LAPD detective Jack Radcliff. He’s extremely close to his young niece Ashley (A Wrinkle in Time‘s Storm Reid), but distant from her father (Brian Tyree Henry) who has been on the wrong side of the law once too often. When Ashley and the rest of her family are mysteriously murdered, Jack goes into an emotional tailspin. He’s only woken up out of it by an impossible phone call from Ashley, dialing him from a few days before she’s murdered.

An intriguing idea is teased then abandoned that Jack may be having a nervous breakdown. Estes would’ve been wise to keep that question going as the murder plot unfolded, but instead he goes full-on into what turns out to be a very formulaic, generic police story. That shouldn’t be possible when you factor in the sci-fi mechanics at play as Jack works with Ashley to both prevent the killings and uncover who sets them in motion. But this isn’t Estes’ natural forte (his best movie was 2004 coming-of-age drama Mean Creek) and he relies on too many tropes you could find on any cop show on network TV. Basically, you can figure out who the killer is within the first few minutes, as Estes writes the film as if he’s only got an hour, plus commercial breaks, to solve it.

Oyelowo and Reid are great together, as is to be expected. In particular, Oyelowo comes across first as a man both traumatized by what happened and terrified that he may be cracking up, but it evolves into desperation to find those responsible. He’s the best reason to see this movie by far, and if you connect to it at all it’s because he wills it to happen through his strength of performance. Brian Tyree Henry and Alfred Molina don’t get enough screen time to make much of an impression, but Mykelti Williamson impresses as Jack’s partner. Williamson, who I’ve always felt is one of the great over actors of our time, puts that ability to good use in a film that sorely needed to be more reckless and unpredictable.

Don’t Let Go has a nifty sci-fi idea that is unfortunately saddled by a bland crime drama that we’ve already checked out from long before it’s over.