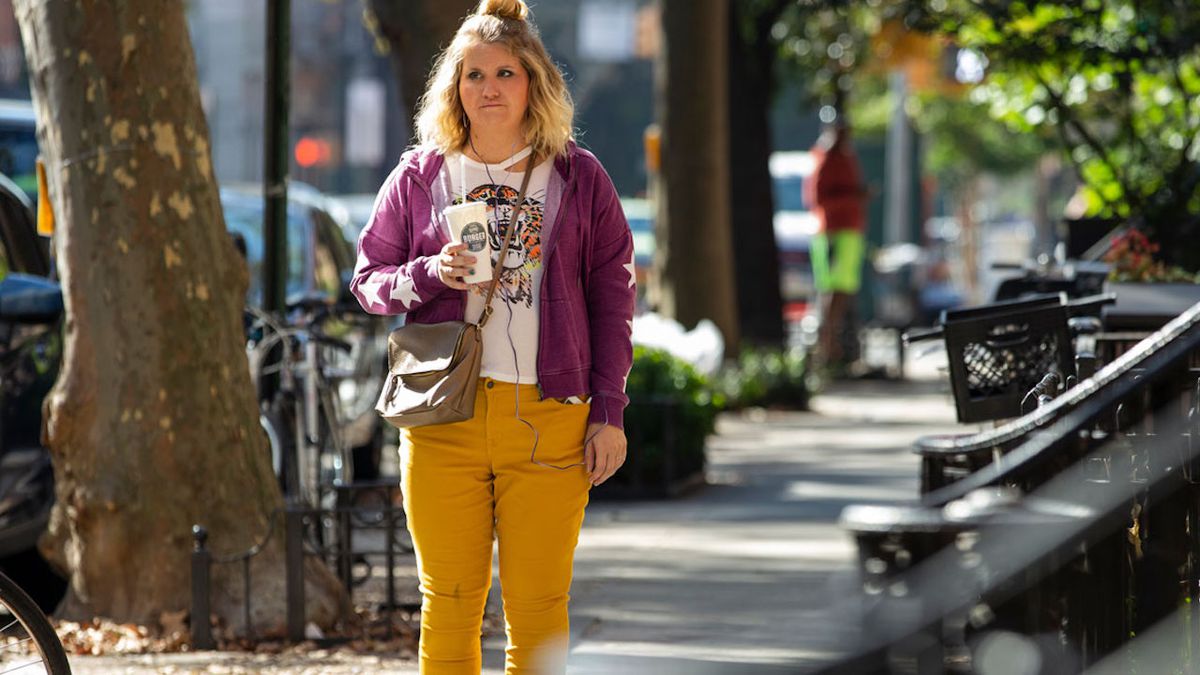 It’s easy to label a movie “inspiring”, but rarely do they actually inspire anyone to do much of anything. In most cases, the accomplished feat is the overcoming of an impossible odd most people will never have to face in their life.  What’s inspiring about that? One of the many positive aspects of the indie dramedy Brittany Runs a Marathon is that it tells, with brutal honesty and humor, of a real-life weight loss journey. Struggling with weight is something almost everyone can relate to, but it’s a touchy subject that Hollywood has rarely handled with care. Perhaps all they needed was Jillian Bell to carry it over the finish line.

I have to admit, my concerns about Brittany Runs a Marathon were that it would inadvertently fat shame its subject, who is based on someone familiar to writer/director Paul Downs Colaizzo. It’d be a lie to say the film gets it right at every step, but rarely have the complexities that come with  transforming one’s body and lifestyle been captured with such a light touch, while avoiding easy tropes and stereotypes. Jillian Bell is terrific as Brittany, a 28-year-old New York City gal whose life is going nowhere. She has a lousy job, and a self-absorbed roommate in Gretchen (Alice Lee), who only wants to party and keep Brittany around as her overweight sidekick. She’s a bit of a trainwreck, but can deflect the pain she’s feeling with a quick joke. However, a visit to her doctor to score some recreational Adderal (at least that’s what is clearly implied) goes sideways when he says she’d feel a lot better after losing 55lbs.

Right away, my alarm bells starting ringing. Look, I don’t expect every script to dive into nuances reserved for the Surgeon General, and I know all too well that many doctors immediately ascribe any health concerns to a need to lose weight. It just put me on guard about the rest of the movie. Fortunately, Colaizzo’s script doesn’t subscribe to such easy answers the rest of the way. Brittany, against her better judgement, decides to start working out, but in a funny bit at the nearby gym quickly learns how expensive that can be. So she decides to take up a more economical route and go jogging, inspired by her lonely upstairs neighbor Catherine (Michaela Watkins), who Brittany has previously poked fun at for her exercise commitment. Now it’s her turn, and it’s true that any journey begins with a single step…which is about all Brittany can do without breaking into a sweat. But soon she’s running more than a block; she’s changing her eating habits, joining Catherine’s jogging group, and making new, more supportive friends like Seth (Micah Stock), a father shamed into working out by his young son.

Of course, there’s also a love story because there just has to be one. However, to Colaizzo’s credit this newfound romance Brittany enters into is only formulaic in the “meet cute” phase. Pitch Perfect’s Utkarsh Ambudkar plays Jern, a snarky, seemingly-laze pet sitter who works the shift opposite Brittany. But he’s pretty much moved into the client’s house so they see one another all day, and as Seth is quick to point out, all that bickering is really just sexual tension. Nice of them to not treat the audience like fools. Only Brittany can’t see what’s coming.  But what I like about their relationship is how it signifies so much about her life that has changed. Jern is part of Brittany’s acceptance of people who add positivity into her life, and the dumping of those who don’t. A lot of support is needed to accomplish what Brittany does, and it’s good to see the film acknowledging that in Catherine, Seth, and Brittany’s tough love brother-in-law played by Lil Rel Howery.

At the same time, the potential pitfalls of a rapid change in lifestyle aren’t glossed over. A lifetime of seeing herself as the fat friend has led to a lot of self-hatred, and losing a lot of weight doesn’t immediately change that. We see Brittany’s obsession with getting thinner and dropping pounds, to the point of doing real damage to herself physically. On an emotional level, she’s also unprepared for being treated differently by society once she has gotten skinnier. Her mindset towards plus size women also needs to be checked, and it’s a lesson she has to learn the hard way. Colaizzo lets Brittany off the hook a little bit on this one. After she’s unforgivably cruel to an obese woman there’s no real accountability for what she did, and I think that sends the wrong message.

This is far and away the best role of Bell’s career, showing she’s so much more than just a comedy actress good at pratfalls.  Despite some unfortunate facial prosthetics to pack on a few pounds, Bell makes Brittany’s evolution a believable one, full of ups and downs that don’t always paint her in the best light. She finds surprisingly good chemistry with Ambudhkar, but honestly, she’s best when alongside Watkins. The two worked together previously, playing a couple in Lynn Shelton’s Sword of Trust, and they just play off one another so well.

As you probably figured out by the title, it all comes down to a marathon, the New York City Marathon, that Brittany and her friends decide to train for. You should have an idea of how that goes, which is why it’s the least important part of the movie. Crossing the finish line isn’t really the point, but the hard work it took to get there, the self-reflection, and the friendships made along the way are. Get off the couch and see Brittany Runs a Marathon now. You won’t regret it.