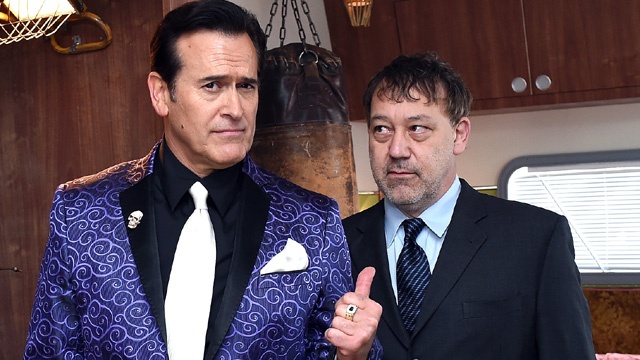 Much like the Deadites that terroize the poor souls of the films in it’s franchise the Evil Dead series just won’t die, and damn does that make me happy. The awesome folks over at BloodyDisgusting recently sat down with the franchise creator and now iconic director Sam Rami to talk about Crawl, which hits theaters this weekend and was produced by Rami. As is want to happen during a talk with Sam Rami eventually The Evil Dead came up and what Rami had to say was…groovy.

“I’d love to make another one. I don’t think TV is in its future but we’re talking about one or two different ways to go for the next movie”

So it sounds like this has legitimately been bounded around and could actually happen, and why not? Look, horror is in a good place with thanks to guys like James Wan, Leigh Wannell, and Jason Blum (well, all of Blumhouse really) but the last decade or so has really kept a hard focus on paranormal horror, everyone needs a good crazy demons risen by a satanic book slasher from time to time. The only real roadblock is that Bruce Campbell has announced his retirement from acting following the end of the surprisingly good and woefully under-seen Ash Vs Evil Dead TV show. This doesn’t seem to be a big problem for Rami for a few reasons. First, would Campbell really not come out of retirement to play pretend with his lifelong friend one last time? Second, it sounds like Rami has a few possible roads to go down should Campbell not return. The interview mentions thoughts on continuing on in the universe the remake brought to the screen with Fede Alvarez and a few other optoins…they could even adapt some of the characters from the TV show for the big screen.

Campbell and Rami are probably two of the most likable guys in Hollywood…you can’t help but to hope for the best things for both of them, personally I just hope what’s best involves a ride in that Delta ’88 down one last highway to hell.