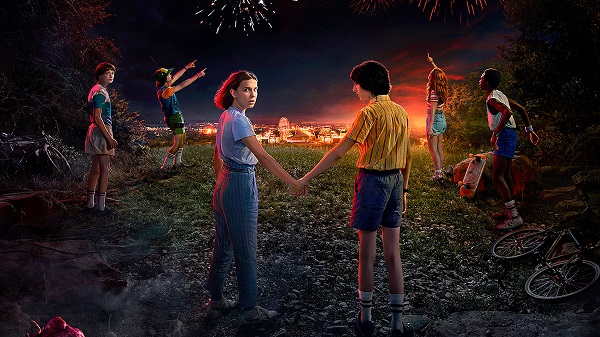 “The best things come to those who wait.”

That couldn’t be better said with the third season of Netflix’s Stranger Things.  It feels like it’s been forever since the second season of the cult show came in 2017.  Many fans were left wanting to see what else is going to happen to the kids of Hawkins, Indiana as they managed to save their town (and perhaps the world) for a second time from the Mind Flayer and his legions of monsters from the Upside Down and would, unfortunately, have to wait an additional 2 years for the next season Netflix’s cult show… TOTALLY WORTH IT!!

Eleven (Millie Bobby Brown) managed to close the gate between our world and the dark and insidious dimension with her telekinetic powers, and the rest of the kids helped fend off against the “demo-dogs.”  All seemed to be well as the second season closed with the kids attending their local school dance, until you saw that the Mind Flayer is just waiting for the chance to get back into our world and continue its cross-dimensional conquest of our world.

In the aftermath, Hawkins has seemingly returned back to normal for a second time.  You would think that after 2 instances of monsters rampaging the small Indiana town that everyone would just be in a constant state of high alert, but life goes on.  Eleven finally has a normal life and is Chief Hopper’s (David Harbour) adoptive daughter.  She and Mike (Finn Wolfhard) can’t seem to keep their hands (and lips) away from each other, as is what happens as the hormonal floodgates open for these young kids as they continue into teenagerdom.  It’s summertime now and with the 4th of July approaching the kids have plenty of time to hang out, get in fun kid trouble, and of course… deal with the Upside Down.

Times are a changing in Hawkins this season.  For one, the town is getting a mall.  Nowadays we all take malls for granted because we literally have any shopping store at our phone and fingertips, but back then, the mall was the best thing imaginable, and the show helps capture the “newness” and fun that exists from getting lost in the endless experience of shopping and hanging out at the mall, especially for teens.  Secondly, the kids are getting older.  No longer does playing D&D seem as fun as hanging with members of the opposite sex as evidenced by Will’s (Noah Schnapp) want to play with his friends while Lucas (Caleb McLaughlin) and Mike just want to spend time with Eleven and Max (Sadie Sink).  Dustin has just returned from summer camp with his own secret he wants to share with the group, they just don’t have time for, causing him to go on his own adventures.  The older teens are also busy growing up.  Mike’s older sister Nancy (Natalia Dyer) and Wills older brother Jonathan (Charlie Heaton) are working an internship at the local paper.  While Jonathan is fine honing his photography skills, Nancy is not feeling being the de facto lunch and coffee girl for a good ol’ boys club of sexist reporters (with Jake Busey being hilariously awful).  Nancy wants to chase a story she thinks is a big deal, only to be consistently laughed off and told to fix their sandwiches.  Meanwhile, the most popular teen turned most awesome monster killing babysitter ever Steve (Joe Keery) now works at the mall in an ice cream store with newcomer Robin (Maya Hawke) watching life continue to pass him by.  Meanwhile, Max’s older brother Billy (Dacre Montgomery) continues to be the new Steve, just a tox the max with his douchiness.  Billy plays a big role this season!

The summer seems to be starting out fine until the town starts having rolling blackouts.  A mystery of refrigerator magnets losing their stick causes Will’s mom Joyce (Winona Ryder) to start thinking that the supposedly defunct Hawkins Lab of the Department of Energy is up to something, kickstarting this season’s adventure for everyone to get involved in.  At the same time, Chief Hopper and Joyce are continuing their Sam & Diane “will they, won’t they” dance as it’s clear they have feelings for each other through all their previous adventures.  When last season ended, the DOE lab was shut down and seeming to admit their faults and even had Dr. Owens (Paul Reiser) turn into a good guy.  This season, we have a new human big bad, but it’s not who you would expect and an interesting choice that shows how events on the show are done on a much, much larger scale. 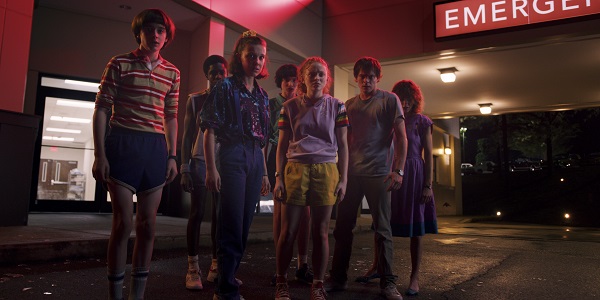 In typical Lord of The Rings fashion, the “fellowship” gets split up this season.  Nancy and Jonathan investigate a potential story that has grave consequences.  Eleven, Max, Lucas, Mike, and Will discover that the Mind Flayer might not be trapped in the Upside Down when things start to get crazy.  With Will previously possessed by the Mind Flayer, he is able to detect him by a sudden feeling of dread and goosebumps on the back of his neck.  Dustin (a little bummed by his friends) tags along with Steve, who Robin tags along with, and then Luca’s sister Erica (Priah Ferguson) last year’s scene stealer tags along with them as they discover who the human culprits are and how they play a role in the Upside Down’s return.  The adults also investigate what’s going on even enlisting the help of last year’s scene-stealing Murray Bauman (Brett Gelman), which also includes dealing with the town’s corrupt mayor (Princess Bride star Cary Elwes serving at this season’s 80’s icon guest star), who’s looking the other way on the potential world-ending activity by the bad guys.

Now, what about the threat from the Upside Down?  Stranger Things continues to be inventive with upping the ante and raising the stakes with each subsequent season.  In the first season, it had the single monster, The Demogorgon as the single threat from the Upside Down, very similar to Alien.  The second season introduced The Mind Flayer, a shadow monster that controlled hundreds of “demo-dogs,” similar to the alien queen and introduced the concept of the Mind Flayer able to possess human beings since he possessed Mike last season.  This season does something even crazier as there’s a new monster and the Mind Flayer has even more abilities that are scary, devastating, and gross as hell.  In fact, the body horror this season is done to the max.  There’s a great deal of both practical effects and CGI, which shows that Netflix spends your $12.99 a month wisely. 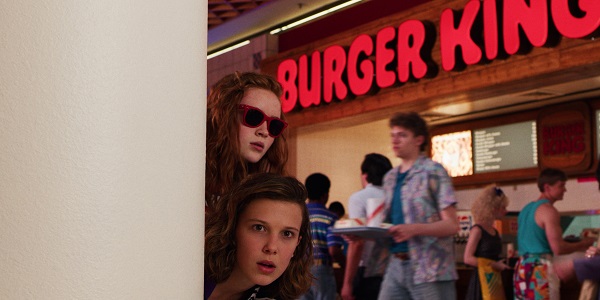 Speaking of spending money, it’s very interesting that it’s getting into the mall phase of the 80s, there’s an overabundance of product placement as we spend a great deal of time at the new mall as we get our share of Victoria’s Secret, The Gap, JC Penny, Sam Goody (remember that place?), Burger King, and of course New Coke.  While the first season made us crave Eggo waffles, it’s a little jarring at the amount of product placement compared to the previous seasons, but it’s done to show the capitalism on steroids of the 80s on full display.  There’s a display of how the mall killed Main Street as most of the local stores from the previous seasons are now abandoned and out of business.  Of course, for us, the Internet killed the mall, so it’s a little ironic to show the cycles of capitalism on the show.

It wouldn’t be Stranger Things without its classic callbacks/homages to movies from the past.  Such films as Back to the Future, The Karate Kid, Jurassic Park, and even Midnight Run are given their due this season.  But the Terminator franchise The Fly, and of course, John Carpenter’s The Thing get the most props this season.  There is also an ever-so-awesome homage to a classic children’s adventure movie that comes out of left field that will make you literally cheer as a child of the 80s in the best way possible… you’ll know it when it happens! Since the show almost relies on the kids, they continue to shine.  It’s clear they are growing up, so the themes they are dealing with are growing up with them.  Mike and Eleven are cute as teenagers who can’t stop smacking lips every second, which pisses off Chief Hopper who continues yelling about her door needing to be “3 inches” open when Mike is around.  Of course, she finds loopholes thanks to her telekinetic abilities.  One complaint I have is that Lucas early on is reduced to comic relief, which is a pet peeve I have about black characters being reduced to that.  Luckily, this doesn’t last long and he not only counsels Mike on relationship issues with Eleven (thanks to his “experience” with Max), and his idea on dealing with the Upside Down proves to be the best idea to help save the day. 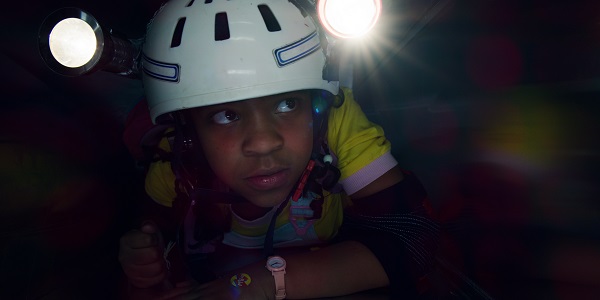 Will finally gets something to do!!  Will was reduced to being off screen the first season as he was kidnapped in the Upside Down and in the second season, he was possessed by the Mind Flayer.  This season he’s not kidnapped or possessed and gets to be just Will, and proves valuable by his ability to detect the Mind Flayer through their psychic connection.
Dustin and Lucas’ sister Erica continues to be awesome as they team up with Steve and Robin as they investigate the human enemies.  Despite Erica being the youngest of the kids, she has the foulest mouth (making her the perfect match for Dustin who says “son of a bitch” as a noun and a verb), yells at them being a “nerd” every chance she can (even though she’s one too), and they prove to be better adults than Steve and Robin when the two older kids are in a dire situation.  Needless to say, the kids continue to be awesome and all have careers ahead of them when the show finally ends.

Speaking of ending, this season (like last season) ends in a neatly wrapped bow of a satisfying conclusion along with a promise of what could come next.  While fans would be fine if another season doesn’t happen, Netflix ain’t crazy and we’ll probably be seeing more of Hawkins, the Upside Down, and the most loveable badass kids to ever grace the small (and probably big) screen for the foreseeable future.  The Duffer Brothers for the third time capture lightning in a bottle and continue to amaze.  This was absolutely worth a 2-year wait…. Just don’t make us wait another 2 years!