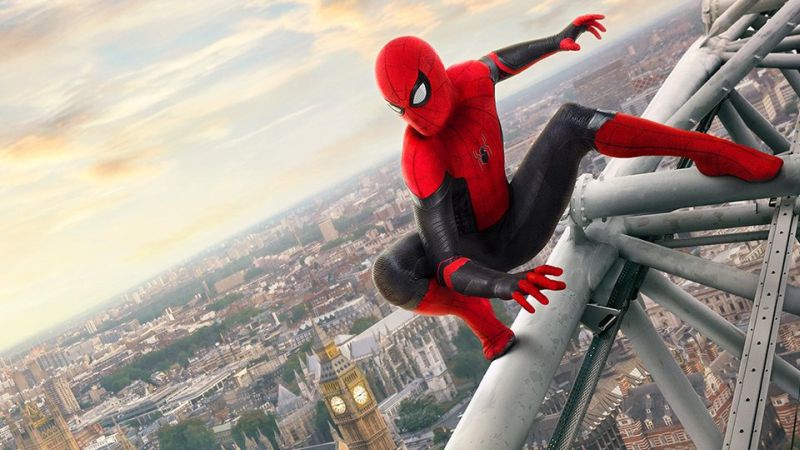 The last year has seen Marvel Studios drop a pair of $2B+ movies in Avengers: Infinity War and Avengers: Endgame, plus a $1B-grossing hit in Captain Marvel. You might think they will start to let that kind of incredible success, where they can seemingly do no wrong, get away from them and perhaps take it for granted. Then you get Spider-Man: Far from Home, a film that not only has to follow one of the biggest movies of all-time, but serve as a sobering epilogue and a crowd-pleasing teen rom-com. Seemingly impossible odds for anybody else but not for Marvel, defying the odds with a sequel that is an amazing, spectacular thrill from start to finish that is such a welcome change from Endgame‘s gloomy finale.

Nothing against Endgame, but you don’t realize how much an uplift in spirits is needed until the opening few minutes of Spider-Man: Far from Home. A welcome tribute to fallen heroes is setup to a goof involving Peter Parker’s (Tom Holland) high school classmates, and just like that it’s like everything is going to be alright. The Marvel Universe can be light and fun again, even if just for a little while. But don’t take that to mean Spidey’s latest adventure is meaningless. A seemingly trivial high school trip to Europe raising the stakes for Peter on a personal level, while at the same time knocking the status quo for a loop.

Following the reversal of Thanos’ snap, the world is a very different place. The Avengers are nowhere to be found, and everyone is looking to Spider-Man to pick up the load. But for Peter Parker, he just wants to go back to school and hopefully tell MJ (Zendaya) how he really feels about her. A high school science trip to romantic Europe seems like the perfect place to do it, and maybe leave Spider-Man back home in New York. Of course, nothing is ever that simple and trouble follows Peter across the pond in the form of gigantic Elementals, creatures that control the immense powers of earth, air, fire, and water. When Nick Fury and Maria Hill (Samuel L. Jackson and Cobie Smulders) come calling for Spider-Man’s help, Peter is forced to choose between what his heart wants, which is to stay on the trip with MJ, and his responsibility to help save the world.

It’s a classic Spider-Man scenario, given new life with Jon Watts’ energetic direction and a script that’s full of humor, shocking twists, and awesome new characters. Straight-up perfection is the casting of Jake Gyllenhaal as Quentin Beck aka Mysterio, who arrives on the scene to battle the Elementals, having faced them in his own tragic world.  More than just a guy with a cool costume and mystical powers (“Was that Mr. Strange?”, Peter gets asked at one point), Mysterio quickly establishes himself as a mentor to Spider-Man, filling a role that has been vacant without Tony Stark. Nick Fury? Not really the mentoring type. There’s going to be a lot of talk, possibly divisive, about Mysterio when this is all over, but to me he’s one of the most exciting new characters to be introduced in a long time and his impact will be felt.

Of course, the heart and soul of these films is Tom Holland, who continues to mature into the role and take Peter Parker from awestruck kid to full-fledged Avenger. How easily he moves from Parker’s teenage antics into action hero is stunning. It reminds me a lot of Robert Downey Jr., who could also shift gears emotionally at a moment’s notice. The supporting cast is great, as well, with Jacob Batalon’s comic relief as Ned always welcome. The terrific Angourie Rice gets a lot more to do as Betty Brant; and the same goes for Marisa Tomei as Aunt May, who shares a lot of screen time with Jon Favreau’s Happy Hogan, much to Peter’s chagrin.

As far as Peter’s relationship with MJ, it follows a pretty traditional roller coaster for high school romances, only with a lot more super spies, water monsters, and dome-headed masters of illusion. Zendaya continues to establish MJ as the most unique ever on the big screen, her cynicism and acerbic wit making for a different dynamic than we’ve seen Peter have with anyone before. There’s so much going on that we probably could’ve seen more of that, but Peter’s awkward attempts at a summer romance with her are always fun to watch.

Not to take anything away from Spider-Man: Homecoming, but Far from Home improves on it in a number of ways. First and foremost, it finally takes the training wheels off and focuses solely on Spider-Man: Previously, he had so much help that he often felt like a passenger in his own story, but here he must fully tackle the enormous burden that comes with being an Avenger. Also, the action has received a serious upgrade, nearly rivaling Spider-Man: Into the Spider-Verse‘s breakneck pace. There are some truly bizarre sequences that will send you on a mind-boggling Inception-level trip, and the final battle may be the best we’ve seen in a Spider-Man movie. You’ll need to see it a second time to just to make sure you caught everything.

If we’re truly to see Far from Home as the final chapter to the Infinity War saga, a little more time exploring Peter’s feelings about Tony Stark would’ve gone a long way. But that would’ve led to a very different movie, and there’s so little about Spider-Man: Far from Home that needs to be changed. Marvel has now made two remarkable high school comedies, and I can’t wait to see what they have in store for Peter Parker’s graduation day.

Rating: 4 out of 5
Trav’s Tip: Not that you need to be reminded, but stick around for two post-credit scenes that include some unexpected cameos and a stunning reveal that changes everything for your friendly neighborhood Spider-Man!﻿