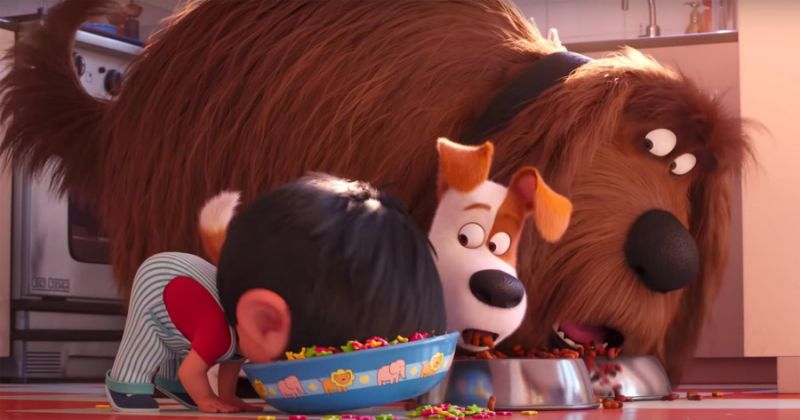 In the span of about 90 minutes, Illumination’s sequel The Secret Life of Pets 2 somehow crams in three competing storylines. It’s almost as if they’re running three separate pilots for a possible TV series, which, frankly, they may actually be trying to do.  But as cute and good-natured as these adventurous four-legged friends may be, a litter of this size is too much for any pet owner, excuse me, human companion, to handle.

2016’s The Secret Life of Pets wasn’t great by any means, but it made a whopping $900M based on a fun premise with a ton of potential. Like a Look Who’s Talking for fur babies, it imagined a world beyond our understanding, where pets talk with one another and go on crazy quests when we’re out living our boring human lives. The sequel picks up with the lead pup, Max (now voiced by Patton Oswalt because Louis C.K. is creepy), whose neuroses has shifted away from behemoth Newfoundland mix Duke (Eric Stonestreet) and towards a new human baby in the house. But it’s not for the reason you think. Max isn’t worried about a lack of attention from his human owners; he’s paranoid with keeping the little tyke safe from the big bad dangerous world out there.

The first movie was a delightful diversion, full of easily-digestible life lessons that most adults probably forgot about the moment the credits rolled. Actually, most kids probably forgot them, too. There are more lessons to be learned for ol’ Max, as the family heads from the city to a dangerous farmhouse where a gruff watchdog named Rooster (voiced perfectly by an equally-gruff Harrison Ford in his first voice role) has disdain for those lazy, skittish city dogs.

This is clearly the main storyline favored by screenwriter Brian Lynch, but the change in locale doesn’t change that we’ve seen Max get this same education already. And so we get a couple of mildly enjoyable detours. The “villain” of the previous film, the excitable bunny Snowball (Kevin Hart), has taken too well to his owner dressing him as the superhero Captain Snowball, and ventures out with a feisty Shih Tzu named Daisy (Tiffany Haddish, a terrific addition) to rescue a white tiger cub from an evil circus owner. Not that an anti-animal cruelty message is necessarily weird to have in these movies considering what they’re about, but the level of inhumanity shown is off-putting and may be hard for littler kids to endure.

My personal favorite story, because it deals with cats (Cats ARE better than dogs, just so you know), follows perky Pomeranian and Max’s stalker Gidget (Jenny Slate), who must learn to be a cat so she can retrieve a lost toy from an old lady’s apartment filled with dozens of angry, malevolent felines. This is where we also get the return of the franchise’s best and most authentic character, Lake Bell’s overweight tabby Chloe, who pukes up hairballs, destroys things, and scorns everyone with the easy disinterest any cat owner will recognize too well.

The jokes are most effective when tailored to pets’ specific quirks, and a too-brief sequence where Chloe teaches Gidget how to act like a cat is brilliant at highlighting how different our pets can be. But with so much going on there’s no clear narrative and an attempt to bring these disparate plots together in a climactic, chaotic finale is too messy to be enjoyed. Perhaps that’s why the credits, which features the simplicity of real-life pets caught on camera doing crazy stuff, earns The Secret Life of Pets 2 its biggest laughs.

‘Indiana Jones 5’ Is End Of The Line For The Franchise