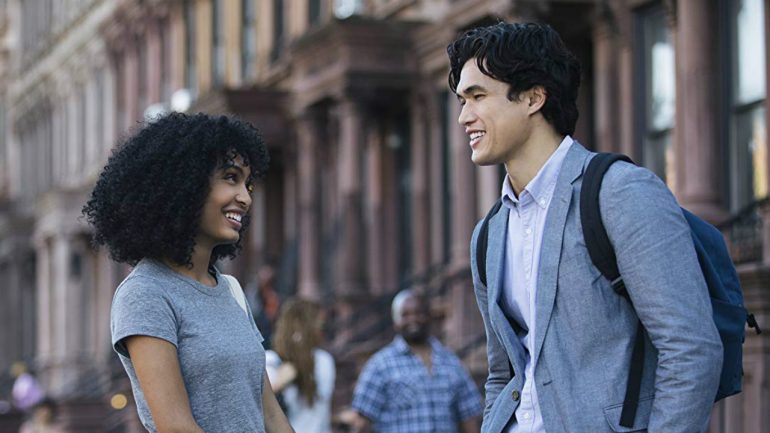 The title The Sun Is Also a Star is the kind of cringe-worthy dreck some lovesick teen scribbles in their diary. That’s also kind of the point. Based on the young adult novel by Nicola Yoon, whose book Everything Everything was previously adapted as a different kind of wish-fulfilling romance, this film is unabashedly earnest, and yes, a little bit corny. But it’s also timely, representative of cultures and perspectives that rarely get their own love stories on the big screen, and a gorgeous love letter to New York City. There’s a lot here, and if one looks below the surface they might fall a little bit in love with the film, too.

This walking-talking Before Sunrise for millennials has the benefit of nifty direction by Ry Russo-Young, who skillfully navigated another YA effort, Before I Fall. Here, the challenge is even greater. Her stars Yara Shahidi (of Black-ish) and Charles Melton (Riverdale) don’t begin with a lot of chemistry, and it takes time to build them into a compatible pair. Fortunately, this is a movie all about doing just that.

The route to getting there is fraught with clichés, but committed portrayals by Shahidi and Melton, along with a script that respects its characters’ journeys, go a long way in forgiving the film’s shortcomings. Yara plays the brilliant, analytical Natasha, the daughter of Jamaican immigrants although in her heart she is 100% New Yorker. She’s the classic case, at least for Hollywood romances, of someone who doesn’t believe love actually exists. If you can’t feel it, touch, or prove it through science, it isn’t real. Of course, she’ll need to be convinced. Melton plays the handsome, poetic (because all handsome dudes are secretly poets in these movies) Daniel, whose artistic soul is being trampled by his Korean parents’ insistence he become a doctor. He’s got a big meeting that day to pursue his parents’ dream, but his heart can’t help but skip a beat when he spots Natasha staring up in the middle of the train station. “Nobody ever looks up”, he says to a friend when he sees her. It must be fate; she’s also wearing a “Deux Ex Machina” jacket, just moments after he scribbled those words in his notepad.

Some truly great love stories have been built on less. Go with it.

Their meet-cute is pure cornball and slightly stalker-ish. Daniel encounters Natasha again on the street, and while following her (!!!) into Chinatown, saves her from being hit by a reckless driver. She’s grateful, he’s high on destiny juice, and tells her he can make her fall in love with him in a single day. Well, she’s busy. He’s got an hour. Why’s she so busy? Because her family is due to be deported back to Jamaica the very next day, and she’s doing everything in her power to prevent it. You’d think something like that would take priority but, well, the heart wants what it wants? Something like that.

From there, it’s basically one long “getting to know you” as Natasha and Daniel stop for tea in Greenwich village, visit the Hayden Planetarium, and hit up a Korean karaoke joint where he performs  “Crimson and Clover” while a dream sequence imagines their sunny future together. It’s here that Russo-Young first begins to defy our expectations, choosing a surprise perspective to the flash forward. We also begin to see how Natasha and Daniel’s cultural identity plays so much into their worldview. Both are first generation children of immigrants, with all of the expectations that come it. She teaches him, and us as it turns out, about astronomy and Carl Sagan’s multiverse theory. He goes into great detail about the history of the black hair care industry, and why Koreans basically have a monopoly over it. But there are also racial tensions that can’t be ignored. Daniel’s parents look at Natasha as beneath him, treating her like a criminal when she enters their store. This may be an idyllic look at America (complete with flashes of the Statue of Liberty) but it’s not without a few rust spots on the ol’ melting pot. Russo-Young’s version of New York City is like something out of a storybook; sun-kissed and lyrical, it’s a place of magic, wonder, and yes, love.

Girls Trip writer Tracy Oliver smartly jettisons characters and diversionary storylines to focus attention squarely on Daniel and Natasha. The film is largely on the shoulders of its two young leads to carry, and it takes time for them to get it right.

“What’s the X-factor?”, Natasha asks Daniel during his opening pitch to her.

“Don’t worry, we have it”, he replies confidently.

Maybe so, but they don’t in the beginning, which it can be argued is exactly how it should be. Love isn’t instantaneous, regardless of what the movies and fairy tales tell us. It happens over time. Not sure it happens quite as fast as it does in The Sun Is Also a Star, but sometimes we all could use a reason to believe in destiny.