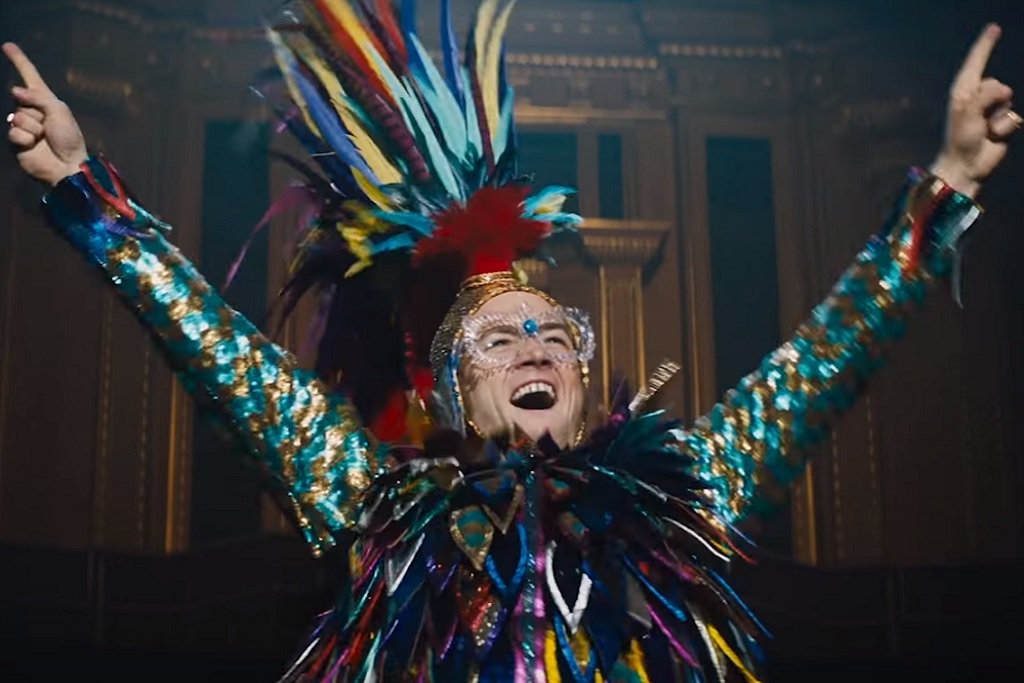 There’s only one way to tell an Elton John biopic, and that’s with an abundance of flash, style, and garish sunglasses. Rocketman is the ultimate Elton John fan film, developed by the ultimate fan of Elton John: himself. Less a warts ‘n all life story than a gorgeous collage of music videos, the film is propelled by the magnetic performance by Taron Egerton as one of rock’s greatest showmen.

While plenty of similarities to last year’s smash Bohemian Rhapsody exist, Rocketman is at its core a musical; a full-bodied, extravagant musical crying out for a Broadway adaptation.  Coincidentally, Rocketman and Bohemian Rhapsody share a director in Dexter Fletcher, but his approach couldn’t be more different. John’s iconic songs are woven into key touchstones of his life, often creating a resplendent work of storybook fantasy. It begins as Elton, in an outlandish orange costume that makes him look like a sports mascot, strides down the hall for what we think is an important show. Only when he bursts through the doors it’s for a rehab session, with everyone looking at him like the oddball he definitely resembles. In a blurring of fact and fiction, Elton walks his fellow addicts through a toe-tapping musical number led by his younger self, Reggie Dwight. With a self-absorbed mother (Bryce Dallas Howard, unrecognizable and miscast) and an uncaring father (Steven Mackintosh), Reggie only gets the love and support he needs from his grandmother (Gemma Jones), who nurtures his obvious musical talent.

The usual rock biopic beats unfold, but credit to Fletcher for keeping the spectacle of Elton’s life front and center. Reggie’s piano and songwriting skills get him a gig playing for an African-American soul band, where he learns to “kill the person you’re supposed to be” to “be who you want to be.” After an electric performance of “Saturday Night’s Alright For Fighting”, Elton John, as he’s now calling himself, teams up with songwriter Bernie Taupin (Jamie Bell) for a partnership that would be like an earthquake to the music industry. Drugs, alcohol, sex, insecurity, greed…all the pitfalls that come with fame are captured in increasingly lavish production, which mask Elton’s mounting depression.

Fletcher, who had wanted to mount a much grittier Bohemian Rhapsody than the band would allow (he was replaced by Bryan Singer, then came back when Singer flaked), finally gets the R-rated rock biopic he always wanted. And to be fair, Elton John allows for aspects of his hedonistic side to be shown, albeit always under the cover of song and dance.  A full-on orgy is teased to the tune of “Honkey Cat”, while Elton’s drug-fueled suicide attempt is drowned out by the title track, performed underwater with angelic divers swimming overhead. But more often than not, John’s music is both electrifying and soulful, blending surreal imagery to enhance the storytelling. Whether it’s literally lifting into the air during a breakout performance of “Crocodile Rock” at the legendary Troubadour, or blasting off into the clouds during “Rocketman”, the film’s dreamlike qualities are never less than breathtaking.  With rock music biopics back on Hollywood’s radar it’s just unfortunate that we can’t get a major one put together by anyone other than the subject or their estate. Rocketman is frustratingly surface-level in looking at the depths of Elton’s darkness because, obviously, he gets to tell his story his own way and that’s without any tragedy that isn’t heaped on by a more loathsome figure. More often than not that’s Richard Madden as scornful lover/manager John Reid (who was in Bohemian Rhapsody as Queen’s manager), or Elton’s neglectful parents.

Acting as both an original and an acclamation, Egerton’s portrayal of Elton John is eye-opening. The Kingsman and Robin Hood star may be a less stunning choice for the role than original star Tom Hardy might’ve been, but it’s still shocking how much he embodies Elton’s spirit and pure talent. Most impressive of all is that he performs all of the songs himself live, no lip syncing, and it’s easy to see why Elton has been so taken by the rising star actor. He makes Elton look and sound damn good!  Rocketman soars as high as it does on his fun and flamboyant performance, along with Fletcher’s visual flair that nearly overshadow the film’s lack of insight. For better and for worse it’s exactly the movie Elton John would want.