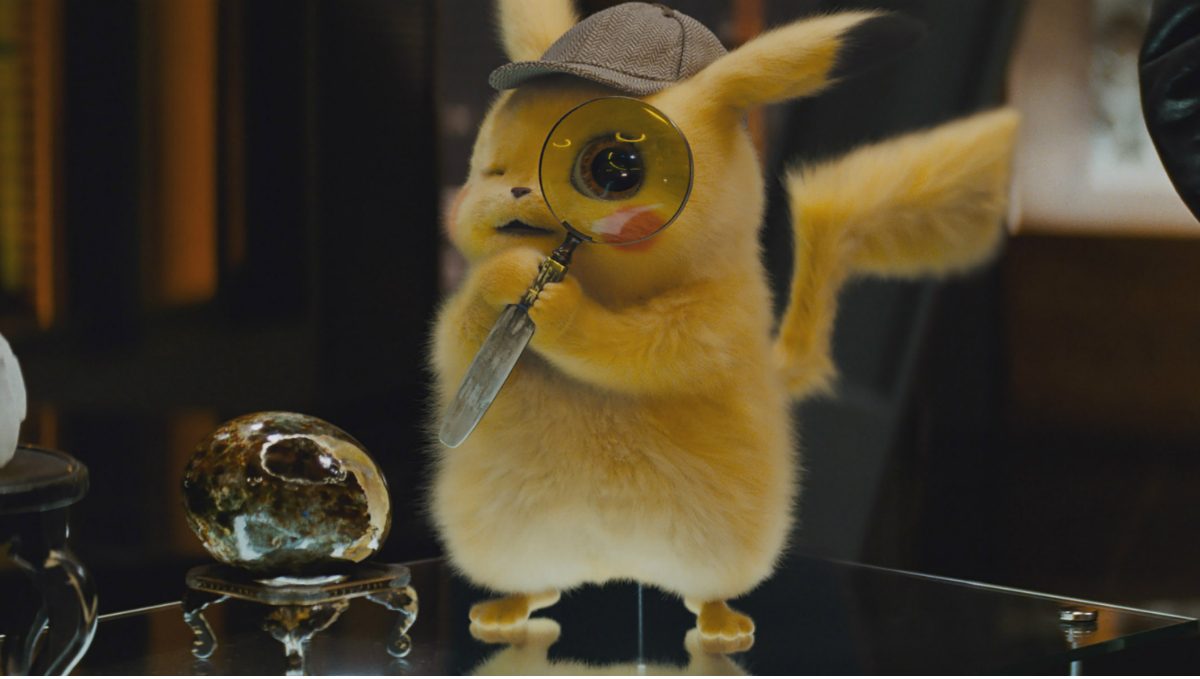 Pokémon have existed as a multimedia phenomenon for three decades, spawning loads of video games, anime, and hit animated movies such as 1999’s The Pokémon Movie. That last one was the first real shot at seeing if this could be a franchise that reached an audience outside of the popular games, and while it took a long time for them to find the right formula they’ve done it with Pokémon Detective Pikachu. Turns out the formula is embracing the inherent weirdness of a world populated by bizarre, powerful pocket monsters and their human trainers. Oh, and having Ryan Reynolds voice the most popular Pokémon of them all, Pikachu.

Pokémon Detective Pikachu isn’t an origin story. Thank goodness; there’s an assumption that everybody already knows how this whole thing works, and that is a refreshing change of pace that unchains this odd whodunit to be more than just another video game adaptation. The result is a live-action/animated hybrid that’s like a cross between Zootopia and Who Framed Roger Rabbit, where Pokémon live alongside humans in what resembles perfect harmony. It’s like you’ve already beaten the games and moved on to what comes next. For dedicated fans of the games it’ll be a treat to see this utopia on the big screen in breath-taking fashion.

There’s a mystery at the heart of this story, though, and it involves Tim (Justice Smith), a young insurance salesman who used to have dreams of becoming a Pokémon trainer, but has since given it up. When his father, a police detective at the sprawling metropolis Ryme City, is killed after an encounter with a supremely-powerful and rare Pokémon, Tim must team with his dad’s talking Pokémon partner, Pikachu (Reynolds), to find out what really happened. The investigation finds corruption at the top of Ryme City, where humans and Pokémon co-exist in peace. They team up with Lucy Stevens (Kathryn Newton), an aspiring investigative journalist who believes Tim’s father was on to something big, and those in power wanted to shut him up for good.

Behind the camera is Goosebumps director Rob Letterman, and it’s astounding the tactile world he’s able to create out of so much CGI. Humans and Pokémon shuffle in and out of the frame by the dozens, sometimes the hundreds, and it all looks stunningly detailed, often taking a futuristic film noir quality ala Blade Runner. With only a few exceptions, the world of Pokémon is new to most people who have never heard of a Psyduck (Lucy’s telekinetic Pokémon partner) or the turtle-like Blastoise, or the aptly-named Lickitung (It has a giant tongue for licking), but Pokémon Detective Pikachu doesn’t treat these creatures as oddities needing to be explained. The Pokémon are truly the stars of their own story, while the humans are the invited guests.

That also means the unsavory aspect of trainers capturing/enslaving their Pokémon has been done away with.  This isn’t a story where the goal is for a human character to capture the strongest Pokémon for his collection, but one where peaceful co-existence between the two sides is threatened. Make no mistake; the Pokémon are the stars here and that is best exemplified by Ryan Reynolds’ voicework as Pikachu. Reynolds was a sneaky choice to play the most recognizable Pokémon on the planet. He has the rat-a-tat-tat rapid fire energy of the electric caffeine-addicted Pikachu, and yes, he drops some mildly risqué one-liners like a tone down version of Deadpool. What’s great about Reynolds is how he’s able to switch gears at the drop of a hat, from making a pee joke one second to consoling a distraught Tim the next. No matter what the moment calls for, Reynolds always recognizes that he’s voicing the Pokémon version of Sherlock Holmes and just rolls with the strangeness of it all. The human characters played by Smith, Newton, and others don’t fare so well because this isn’t really their movie. It’s Pokémon that drive the story momentum and that’s how it should be.

While some of the gags skew a bit older, this is still a movie for kids.  The mystery isn’t terribly compelling and runs out of steam early on, without ever recovering. Once that happens there’s an attempt to compensate with a huge action sequence involving a gigantic Ground-type Pokémon doesn’t look particularly good and adds little to the story. A convoluted body-swapping finale is more loud than interesting, and detracts from the good-natured fun that worked so well in the beginning.

It’s the lowest of low bars to say that Pokémon Detective Pikachu is the best video game movie ever. To make it clear, the best ones are DOA: Dead or Alive and Ace Attorney. Challenge me. Anyway, what Pokémon Detective Pikachu does is break the barriers of its video game universe to appeal to die-hard fans and those who don’t know a Mew from a Mewtwo.