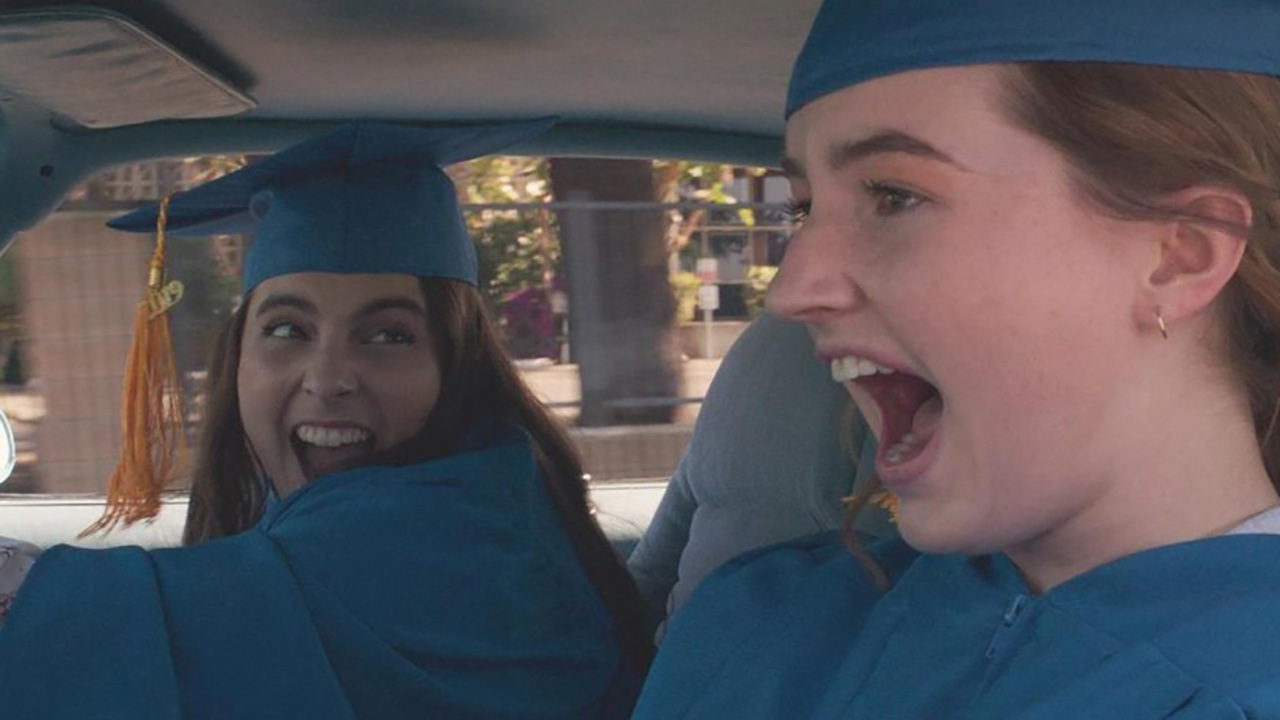 The genius of Olivia Wilde’s raucous, inspired teen comedy Booksmart is that it doesn’t attempt to reinvent the wheel. High school comedies are always representative of a certain generation but the themes are always consistent. Combining the best of John Hughes with the rebellious attitude of Lady Bird, the raunchy energy of Superbad, the awkward isolation of Eighth Grade, and so much more, what separates Booksmart most is that it centers on two brilliant adventure-seeking girls.

The female perspective is crucial to reinvigorating a stale formula and totally flipping the genre on its head. Beanie Feldstein (whose brother Jonah Hill starred in Booksmart‘s spiritual cousin, Superbad) and Kaitlyn Dever are best friends Molly and Amy, two bookish seniors on the cusp of graduation and an Ivy League future. They’ve spent their high school years studying hard and looking down on the hard-partying jocks, the drunks, the perceived sluts who are destined to spend their lives pumping gas.

Oh, but wait…those class clowns…they got into the same exclusive schools. And they had fun. What the Hell were Molly and Amy doing all this time?  Even the school stoner turns out to be so smart he’d going to be a millionaire as a tech wiz. This cannot stand. With one last blowout bash before graduation, the girls decide it’s finally time to crash a party and cut loose. They’ve got a lot of lost time to make up for.

What follows is a madcap race through the city, with diversion at a tacky boat party thrown by the “trying too hard” nerdy rich kid (Skyler Gisondo), a detour at murder dinner party led by the theatre students, and a brief stop to hijack a pizza delivery guy. The party is the destination, but the journey, which sees Molly and Amy trying to hold on to this little slice of freedom before a seemingly pre-destined future is where the film is at its best. For once, we have a high school comedy led by a couple of hyper-intelligent females and not a bunch of moronic dudes looking to get laid. The perspective matters in contextualizing Molly and Amy’s relationship, while also upending our expectations.

Not to say that getting laid is out of the equation, but you won’t find anybody poking an apple pie or anything. A teddy bear, maybe.  Amy hopes to finally talk to a cute skater chick she’s been eyeing for years but has always been scared to approach. Molly, who has all of the aggressive political aspirations and subtlety of  Election‘s Tracy Flick, secretly has eyes for jock/class VP Nick, who is kind of an idiot. The film shoots down notions that girls handle this whole romance thing with any more maturity than guys, because clearly they don’t. But also, there’s quite a lot of sex positivity in the screenplay credited to four female writers. Amy’s homosexuality is only made a big deal by Molly, who enjoys needling her friend’s all-too-accepting conservative parents (played by Lisa Kudrow and Will Forte). There’s even a lot to say about women who slut shame other women, and the real emotional harm it can cause.

Feldstein and Dever make as great a mismatched pair as Jonah Hill and Michael Cera were in Superbad. Both films tread on similar ground, setting themselves on the cusp of graduation when you’re excited about what comes next but terrified of letting go from the familiar. Molly is the more outgoing of the two, while Amy is more measured, but together they both are prone to unpredictable wild streaks. While their relationship goes through some ups and downs, and there’s a point where we see that closeness can be rather toxic, there’s nothing but love there and that’s obvious from the start. You can also tell both stars had a real blast making this movie, and making it for Wilde in her directorial debut. Wilde keeps the energy moving briskly and chooses an absolutely mint selection of old school hip-hop jams (Hey, she’s from my generation!). The sheer number of screenwriters does cause for a bit of inconsistency in the style of humor, and I would say the Murder Mystery dinner scene is a drag, and some of the sentimentality is laid on pretty thick, but overall the funny far outweighs the lame.

A big reason to thank for that is the supporting cast. Billie Lourd has been great in just about everything, and she’s the definite scene-stealer here as spacey, blissed-out Gigi who seems to show up everywhere she’s least expected. Wilde finds a sympathetic role for her husband Jason Sudeikis as a principal trying to make ends meet in an embarrassing fashion, and the always-welcome Jessica Williams shines as the school’s most popular teacher and is perhaps still too close to her own teenage years. Hilarious, perceptive, and contemporary, Booksmart has the makings of a classic, and could be the start of an amazing directorial career for Wilde.