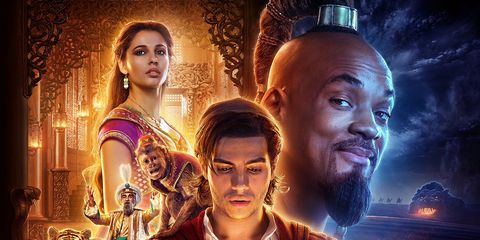 Following the mediocre Dumbo and The Nutcracker, it really is a whole new world for Disney with Aladdin. Disney’s riskiest live-action remake yet, the beloved 1994 animated film still holds a place in the heart of millions, with Robin Williams’ performance as the Genie utterly irreplaceable. So it’s a little worrying they decided to go with a largely unknown cast and director in Guy Ritchie who is best known for stylish crime flicks, not sweeping family-friendly musicals. But it’s fortunate, Disney has “never had a friend” like Will Smith whose boisterous, bountiful performance is more magical than any lamp or flying carpet.

Smith’s gigantic personality doesn’t make you forget Williams, but he’s perhaps the one actor who can bring the right mix of bravado, charm, humanity, and showmanship. He lights up every scene whether bathed in a bluish hue and decked out in a treasure trove of CGI or not. Surrounding him is an enchanting, lavish story that should win over the skeptical, and brings a contemporary angle that sets this version apart in a good way.

Many doubts surrounded the casting of Mena Massoud as street urchin Aladdin, and Power Rangers’ Naomi Scott as Princess Jasmine. I too was unimpressed with everything I saw from Massoud’s performance in a series of clips released by Disney, but those scenes don’t do justice to what we see in full context. While he starts off a bit rough, he shakes off the rust quickly in a note-perfect, faithful recreation of “One Jump Ahead”, mad dashing through the market square of the fictional Agrabah with his kleptomaniac monkey Abu. But it’s Scott who impresses most as Jasmine; the fierce princess who was a bit passive in the original film is now has aspirations bigger than marrying a worthy Prince. It’s a timely and I would say necessary update to Jasmine’s character, and her new take charge attitude is a welcome breath of fresh air. A new character, Jasmine’s handmaiden Dahlia (Nasim Pedrad) is introduced and she helps to ground Jasmine and, surprisingly, to humanize Genie.

Otherwise, the story stays largely the same. Aladdin encounters the Princess Jasmine, they hit it off while running from the palace guards, but as the Sultan’s daughter she must marry a man of royalty, not some common street urchin. Captured by the evil, ambitious Jafar (Marwan Kenzari), Aladdin is forced into the Cave of Wonders where he discovers a magical lamp, a flying carpet, a nation’s worth of treasure…oh, and a lot of lava. The lamp holds an all-powerful Genie, and after a fittingly Barnum-esque performance of “Friend Like Me”, frees them from the cave and offers Aladdin two more wishes. In order to be with Jasmine, Aladdin asks to be transformed into a prince, but it’ll take more than fancy clothes and a title to win her heart.

If you loved Alan Menken’s score in the original film you’ll find his work to once again be music to your ears. Not content to simply rehash, Menken rewrote some of the songs with Will Smith in mind. Jazzy, hip-hop infused and heavy on the Bollywood grandeur, each tune compliments the multi-talented cast. The only song that really doesn’t work is a new one co-written by The Greatest Showman‘s Pasek & Paul. Titled “Speechless”, it’s a solo lament from Princess Jasmine, and while its position in the film makes sense the track is bland and the choreography practically nonexistent. Without something from the classic film to draw film Ritchie and cinematographer Alan Stewart fail to enliven the track with anything substantive.  Ritchie’s quick-cutting habits still rear their ugly head, occasionally preventing you from luxuriating in the amazing visuals. This is especially evident during “A Whole New World”, a duet about the splendor of the open world which feels like it’s confined in the “itty bitty living space” of Genie’s lamp.

I had complained in recent weeks that Disney seemed to be ignoring Aladdin, as its release wasn’t feeling like the major deal it should. Perhaps they were betting all of their chips on The Lion King. If that’s the case, Disney should correct course right away. Aladdin cast a spell on me, capturing the original’s spirit and reminding why so many consider it a classic in the first place.