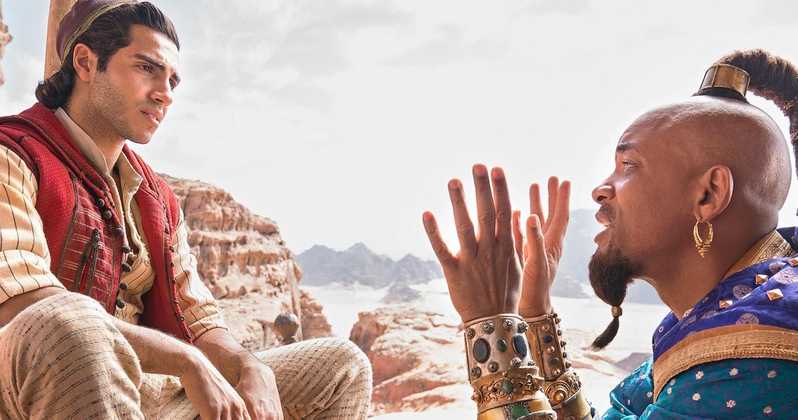 The bloom is really off the rose of Disney’s live-action remakes, and you can see it in the non-existent buzz surrounding Aladdin. Unlike their upcoming remake of The Lion King which I think there’s genuine excitement for, Aladdin feels like just another movie coming out this month when it should be a major event. One reason could be a tepid clip like the one below, which sets up one of the most memorable scenes from the classic 1992 movie.

Mena Massoud plays the titular street urchin, who in this clip is seen trying to win the heart of Princess Jasmine (Power Rangers star Naomi Scott). With a little bit of charm, some courage to throw himself off a balcony, and a lot of help from a magic carpet, it looks as if he’s on his way to doing so. While titled “A Whole New World”, the scene doesn’t actually include the famous song so I’m guessing Disney wants to hold that for those who buy a ticket.

Nothing about this does much for me, though. While director Guy Ritchie (that still amazes me) has done a solid job of faithfully recreating the animated movie, it’s Scott and Massoud who fail to impress. Neither of them seems to be bringing much to the table, and while it’s too soon to pass final judgement there doesn’t appear to be much chemistry between them.

Fortunately, there may be one saving grace and that’s Will Smith. I know, folks have been tough on his depiction of Genie and for very good reason. Stepping in to fill the shoes of the late Robin Williams is a tough deal for anybody, but in the clip “I Wish to Become a Prince” he gets a chance to make the character his own. Sure, he’s just being himself but we like Smith when he’s that way, which is funny and silly and wildly charismatic. He’s just a lot of fun to watch, which is how Genie should be. I’ve also included a clip of Smith showing off his musical skills to Jimmy Fallon with an impromptu rendition of the popular Aladdin song “Friend Like Me.” It’s pretty cool.

Aladdin opens May 24th and co-stars Marwan Kenzari as Jafar, Navid Negahban as the Sultan of Agrabah, Nasim Pedrad as Dalia, Alan Tudyk as Iago, and Billy Magnussen as Prince Anders.