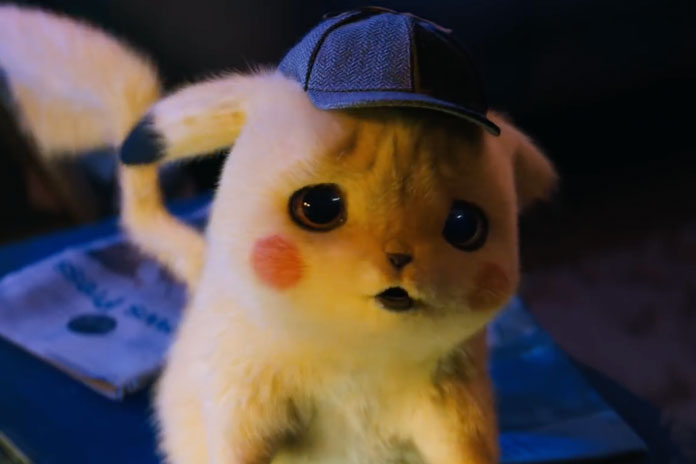 1. Avengers: Endgame– $63M/$723.4M
Avengers: Endgame finally faced some real competition this week, and took a steep 57% drop in its third week of release. Still, that was enough for $63M and $723M stateside, good for the fourth largest third-weekend total ever. Worldwide it has amassed $2.4B and yep, Avatar‘s $2.7B is very much in sight.
2. Pokemon Detective Pikachu (review)- $58M
The aforementioned “competition” was Pokemon Detective Pikachu, which had an absolutely electric $58M debut. That’s good for the biggest opening weekend ever for a video game movie, topping 2001’s Tomb Raider with $47M. This is the second big bite of the franchise apple following 1999’s hit Pokemon: The First Movie, which opened with $31M on its way to $85M domestic and $163M globally. The live-action/CGI hybrid features the voice of Ryan Reynolds as the popular Pikachu, doing his best Sherlock Holmes impression. Warner Bros. employed a two-pronged strategy in marketing it, which I think was smart. On the one hand, Reynold was perfect in playing it up as a kid-friendly version of Deadpool. On the other, the sheer volume of Pokemon in the trailers was perfect for the spot ’em/catch ’em crowd who love the games. It was a bit softer overseas than expected, but overall the film has $170M worldwide.
3. The Hustle (review)- $13.5M
The Anne Hathaway/Rebel Wilson crime caper The Hustle opened with a mediocre $13.5M. A remake of 1980s comedy Dirty Rotten Scoundrels, it doesn’t do much to separate itself from the prior movie, although to be honest, I’m not sure that one was beloved enough to matter to potential audiences. Doubtful too many people were angry about the remake to stay home, is what I mean. On the other hand, you’d almost rather there be outrage than disinterest, which is what seems to have happened in this case.
4. The Intruder– $6.6M/$20.9M
5. Long Shot– $6.1M/$19.7M
6. Poms (review)- $5.1M
The Diane Keaton cheerleader comedy Poms may be from the same producers as last year’s hit Book Club, but they are not in the same league. A mere $5.1M weekend is all it could manage, compared to Book Club‘s $13.5M on the way to $68M overall. Poms may stick it out for a while because many older-skewing films tend to do that, but it won’t do enough to cheer about.
7. Uglydolls– $3.9M/$14.2M
8. Breakthrough– $2.4M/$37.1M
9. Tolkien (review)- $2.1M
Maybe Fox Searchlight should’ve hired Peter Jackson to direct Tokien, their underwhelming biopic of the Lord of the Rings author? Nicholas Hoult stars as J.R.R. Tolkien with Lily Collins as his wife Edith, and frankly, this was never going to be a hit, even with the trailers teasing Balrogs on the WWWI battlefield where the writer fought. It’s a fairly standard drama that tics all the boxes but does nothing exceptional, once again proving that perhaps there should be less focus on authors and more on the work they produced.
10. Captain Marvel– $1.8M/$423.7M