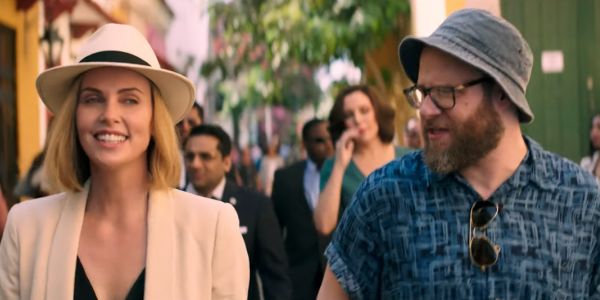 Politics and romance make strange bedfellows in the romantic comedy Long Shot, another movie that finds Seth Rogen paired up with an impossibly beautiful co-star. In this case it’s Charlize Theron, whose character is not only gorgeous but one of the most powerful women in the world, which of course means she’s totally in Rogen’s league.

Directed by Jonathan Levine, Long Shot has been getting some of the year’s best reviews since it debuted at SWSW. I saw it a few weeks ago and was also charmed by it, won over by their surprising chemistry. Formerly titled Flarsky, the story follows Rogen’s character Fred Flarsky, a muckraking journalist who is hired by his childhood crush Secretary of State Charlotte Field (Theron) to be a speechwriter as she makes a bid for President.  It’s ridiculous but a lot of fun and should be a solid escape if you’ve grown tired of all the superhero stuff out there.