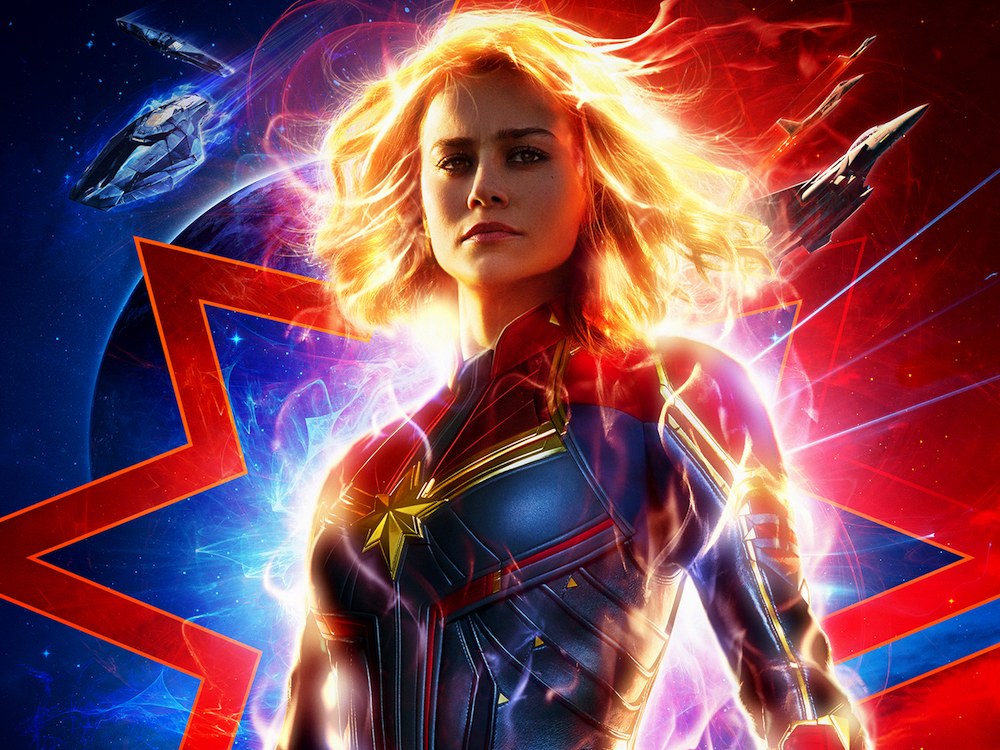 A decade of dominance is what it took for Marvel’s first superhero movie, and with it comes the superhuman weight of expectations on Captain Marvel’s shoulders. Not unlike the hugely successful Black Panther which carried with it the future of comic book movies led by people of color, there has to set a new benchmark while enduring the toxicity of review-bombing trolls eager to drive audiences away. But what those haters will fail to see is a film that works to introduce a powerful new force into the MCU, taps into our nostalgia culture especially for us ’90s kids, and at the same time sets up an exciting future of Marvel movies yet to come. In short, Captain Marvel is a blast.

My biggest worry going in was star Brie Larson. A fantastic actress who I have liked since The United States of Tara, she doesn’t fit the physical model of the Carol Danvers familiar to fans of Avengers comics. Those concerns quickly fade as Captain Marvel wastes no time getting right to the action, as we’re introduced to Vers (Larson), part of the alien Kree and a member of Starforce, an elite unit of noble warriors pledged to battle the shapeshifting Skrulls.  In true origin fashion, Vers has no memory of her past, but she’s got a rebellious streak that irks her hard-nosed commander, Yon-Rogg (Jude Law), who urges her to keep in check those incredible cosmic powers she wields. It’s clear, not only to us but the powerful Supreme Intelligence (first seen looking a lot like Annette Bening, because it’s Annette Bening), that Vers is not like the other Kree.

The lingering question throughout the film is why is Vers different, and how did she attain those incredible abilities? That mystery isn’t hard to figure out but getting there is so much fun, and like we’ve fallen into one of Doctor Strange’s portals and come out in 1995. In pursuit of the Skrulls, Vers literally crash lands into a Blockbuster Video, picks up a copy of The Right Stuff, blasts a standee of True Lies, and suddenly we’re walking down memory lane, Marvel-style.  Embracing the style of the era, Captain Marvel shifts into a buddy comedy that pairs Vers with upstart SHIELD agent Nick Fury, played by a de-aged Samuel L. Jackson looking like he just strolled off the set of The Great White Hype. His youth is a little off-putting at first; same goes for Clark Gregg as a young agent Phil Coulson, but it’s only a momentary distraction.

Car chases and cosmic-powered shootouts follow, but at its best Captain Marvel is about a woman finding her place in a world she never truly knew existed. There is a romance to this story but it’s not what you might expect; the love story of the sisterhood between Carol Danvers and her best friend, Maria Rambeau (Lashana Lynch), both Air Force pilots at a time when women weren’t allowed to be such things. The friendship between them, which we see flashes of before being fully realized about halfway through, thrusts Captain Marvel‘s story into overdrive. The strength both women derive from one another pushes them, literally, into uncharted worlds, while at the same time humanizing Carol Danvers who is easily on the Superman-level power scale. While the “get knocked down, get back back up” theme is pretty simplistic, it’s visualized in perfect montage by directors Ryan Fleck and Anna Boden, who also know their way around an uplifting time-appropriate soundtrack. The No Doubt and Nirvana fan in me was quite happy, even though some of the choices are a little on-the-nose.

Marvel continues to have an embarrassment of riches in the supporting cast. Jackson’s jokey pre-cynical (and pre-eyepatch) Nick Fury is a constant source of humor, and his connection with the erstwhile feline Goose makes me want a Fury/Goose teamup movie RIGHT NOW. Further setting up latter stories are Djimon Hounsou as Korath and Lee Pace as Ronan the Accuser, roles they played previously in Guardians of the Galaxy. Ben Mendelsohn’s Aussie accent is a little bit weird as the Skrull leader, Talos, but he brings some surprising layers to that character best left unspoiled. And Jude Law is clearly relishing his chance to play the Yoda-like mentor, Yon-Rogg.

Throughout Captain Marvel I kept thinking about what each scene means to the current state of the MCU. Obviously, Carol Danvers is going to be the ultimate force against the might of Thanos, but there’s more this move sets up beyond that. The determination, strength, leadership, and courage Danvers puts on display echoes a different soon-to-be-departing Captain in the Avengers. Unlike him, she’s a little bit rough around the edges; it’s safe to call her a work-in-progress, but the flaws are what make her endearing. I can already see the scores of little girls who will be looking up to Captain Marvel, dressing up as her at Comic-Con and for Halloween. As Captain Marvel comes to its glowing, explosive conclusion, you almost feel sorry for the beatdown Thanos has coming his way. Captain Marvel may be “just a girl” as the No Doubt song says, but she is not to be underestimated.

‘Death On The Nile’ Trailer: Kenneth Branagh Is Back With Another Star-Studded Murder Mystery