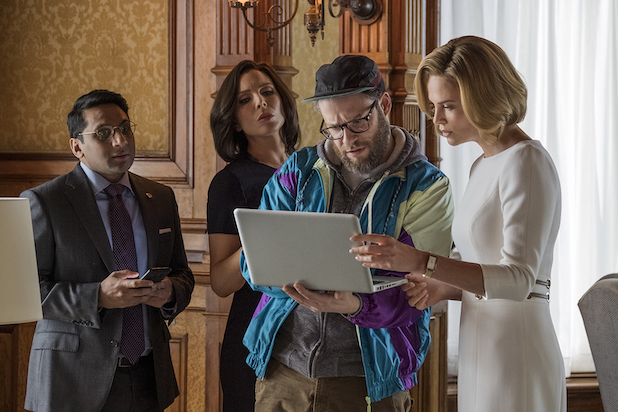 After a rapturous SXSW debut Long Shot, Lionsgate isn’t wasting any time in trying to capitalize on it. A brand new red band trailer for the political rom-com has been released which plays into the unlikely romantic chemistry between the two stars, while also showing some of the film’s raunchier side.
for the Seth Rogen/Charlize Theron comedy

Overall, it’s still a fairly tame trailer by Rogen standards, and that’s perfectly alright. Lionsgate is switching gears a little bit here, undoubtedly taking its cues from the glowing reviews which emphasized the pairing of Rogen and Theron. He plays a struggling journalist who takes a job as speechwriter for his first crush, now a high-ranking politician eyeing a run at the Presidency.

In another wise move, Lionsgate bumped the release date from June, where it might have been lost in the summer blockbuster mix, up to May 3rd where it can get some elbow room while also staying away from the electoral season. Long Shot is directed by Jonathan Levine and co-stars Bob Odenkirk, Alexander Skarsgard, Andy Serkis, Randall Park, O’Shea Jackson Jr., June Diane Raphael, and Ravi Patel.