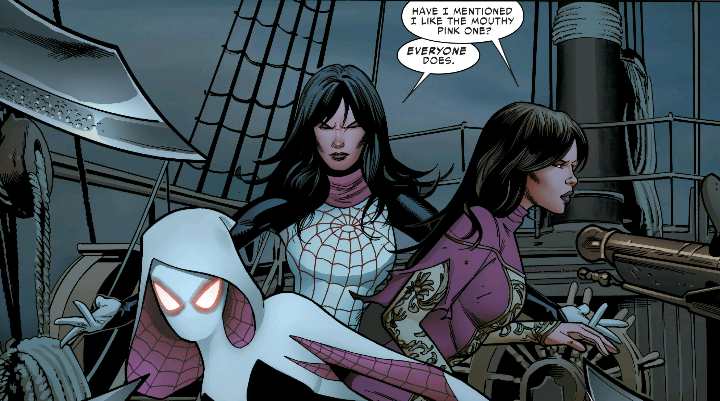 The breakout character of Sony’s Spider-Man: Into the Spider-Verse may not be one of the boys. Instead, it may be Spider-Gwen, voiced by Hailee Steinfeld, who we know Sony already has plans for her own spinoff movie. While we knew she would be joined by other female heroes, producer Amy Pascal has confirmed two that will be swinging into action beside her.

Pascal, in chatting up Sony’s Spider-Man franchise with Vanity Fair, confirmed that Spider-Gwen will be joined by Jessica Drew aka the original Spider-Woman and Cindy Moon aka Silk. This doesn’t scuttle plans for the Silk live-action movie also in development, as the character is clearly seen as a high priority for the studio.

“I think it’s great that we’re going to be able to tell movies about female superheroes in this realm, and in the live-action realm as well, because I believe that there are going to be characters that really resonate for people. They’re funny and quirky and different, and heroic in all kinds of different ways that only animation allows you to do.”


All three of these characters have shared adventures together in the comics so this teamup makes sense, however don’t be surprised if there are more characters added, such as Arana aka Spider-Girl or Madame Web. Into the Spider-Verse had a ton of Spideys so it’s only fair Spider-Gwen have a bunch of allies, too.