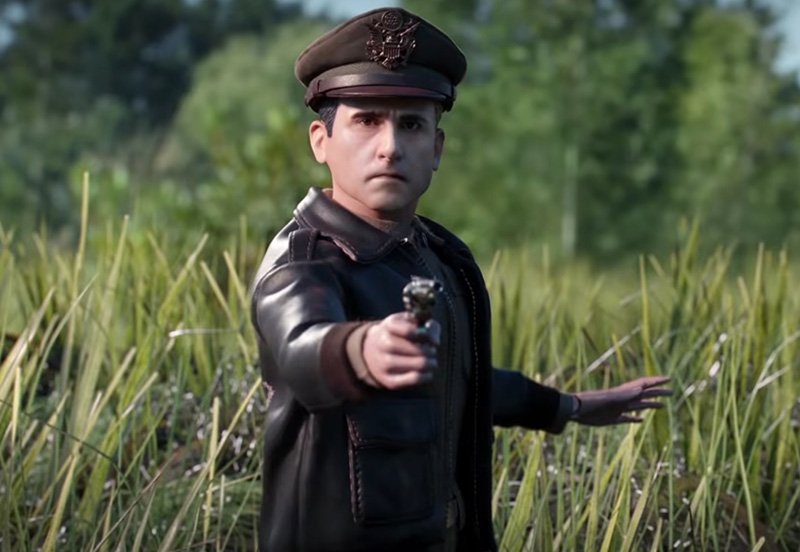 The Hasbro-like CGI fantasy world in Welcome to Marwen is the work of a true visual artist at the peak of his technical craft . I’m sure Robert Zemeckis, who you may recall spent years advancing performance capture with The Polar Express, Beowulf, and others, is happy to know that the action figure realm in which his tonally-misjudged PTSD drama takes place looks amazing, and not like a bad spinoff of Small Soldiers. But Zemeckis is strangely off the mark with the human side of the equation, artist and photographer Mark Hogancamp, whose tragic but encouraging true story of recovery seems like an excuse for Zemeckis to play with his toys.

Mark’s story is truly amazing, and star Steve Carell does his best in giving the man the cinematic treatment he deserves. Years ago Mark was brutally assaulted outside of a bar by five neo-Nazis after admitting to them that he liked to wear women’s shoes. They beat him so bad he was in a coma for over a week and in therapy long after that, having lost nearly every memory of life before the incident. We only see the event in crimson flashbacks, the action picking up deep within Hogan’s fantasy world where he is the brave, wise-cracking, Nazi-killing WWII soldier Hoagie. He’s everything Mark isn’t in reality, and lives in a fictional town of Marwen with five heavily-armed “dames” representing the important women (played by Merritt Wever, Janelle Monae, Eiza Gonzalez, Gwendoline Christie, and Leslie Zemeckis) in Mark’s life.

Marwen is a safe space for Mark where he gets to act out all of his wildest revenge fantasies, as well as some others that diverge into kink. They’re an escape from a reality in which he pops an excessive amount of blue pills, copes with the sentencing hearing of his attackers and whether he’ll attend, an upcoming gallery show of his photographs, and the constant presence of Deja Thoris (Diane Kruger), a fictional blue-haired Belgian witch with the power to zap Mark’s loved ones into oblivion. Whenever one of Hoagie’s dames gets too romantically involved with him, Deja Thoris jealously takes out her wrath on them. The mandate to stay away from Hoagie is broken by Nicol (Leslie Mann), Mark’s neighbor who he quickly falls head over heels (literally) for. It isn’t long before he’s bought a new red-haired doll at the local shop, named her Nicol, and paired her up with Hoagie as a loving couple fighting back the Nazi scurge in-between plastic kissing sessions.

Carell is a talented actor who has shown his emotional range on more than one occasion, so we shouldn’t be surprised at the depths of Mark’s sadness and guilt he’s able to plumb. Like Robin Williams, his ability to make us laugh heavily informs our connection with his characters, especially when he goes dramatic or, in some cases, extremely dark. And Carell does get us to empathize with Mark, a sad wisp of a man who struggles to cope with losing the person he used to be. Aspects of the real Mark Hogancamp are played down, like the fetishistic aspects of Marwen, (the women are frequently in sexualized clothing, if clothed at all, and the threat of rape by Nazis is ever-present), his love of porn (one of the Marwen women is a representation of his favorite porn star), and even his cross-dressing. It’s easy to see why…because that shit is creepy. Not in and of themselves, mind you. But we are talking about a movie in which a man uses dolls to place himself and the women he knows in a variety of hyper-violent and hyper-sexual situations. When Mark starts talking about “connecting with a woman’s essence” he can’t help but come off like a creeper women should probably avoid lest they become a wax figure in his underground lair.

Within moments it’s clear Zemeckis, who co-wrote the script, has a fondness for Marwen and the freedom it gives him to blow up buildings and depict gruesome acts of violence so ugly you forget that these are meant to be dolls. It’s so wildly overdone that we forget Marwen is meant to be of therapeutic value to Mark, and instead we start wondering if something is fundamentally wrong with him. But at least in Marwen there’s no need for Zemeckis to explore Mark’s PTSD or to understand his ongoing trauma, just make shit that looks cool. Zemeckis goes so far as to reference his classic Back to the Future in a time travel sequence so bizarre it left Delorean-esque vapor trails in my brain.  Unquestionably, Marwen looks great but put in context with Mark’s suffering and there’s a vast disconnect that Zemeckis is never able to bridge. Mark’s pain is covered in only the most simplistic way, with Zemeckis underlining every point about a thousand times and hammering home every connection just in case somebody misses his point. When a bothersome final act finally gets to the root of Mark’s diagnosis it’s through a weak metaphor that is telegraphed early on and emphatically revealed as Zemeckis’ big “Ah ha!!” moment.

And yet, Welcome to Marwen is never dull and the actors involved are game to make Mark Hogancamp’s story as authentic as they can with a director who doesn’t value authenticity. I don’t know if anybody plays a compassionate soul better than Wever who is great as Roberta, the hobby shop owner who sells Mark his dolls and knows the truth behind Marwen. To be honest, I have a soft spot for pretty much every actress in this movie; it’s just a shame we don’t get to see more of them as actual people. Although I’ll admit to enjoying the sight of miniaturized versions mowing down Nazis. But people aren’t really what Zemeckis is interested in, and perhaps it would be better for those who are interested in Mark Hogancamp to seek out the documentary Marwencol, which tells his story with greater insight and with far fewer explosions.