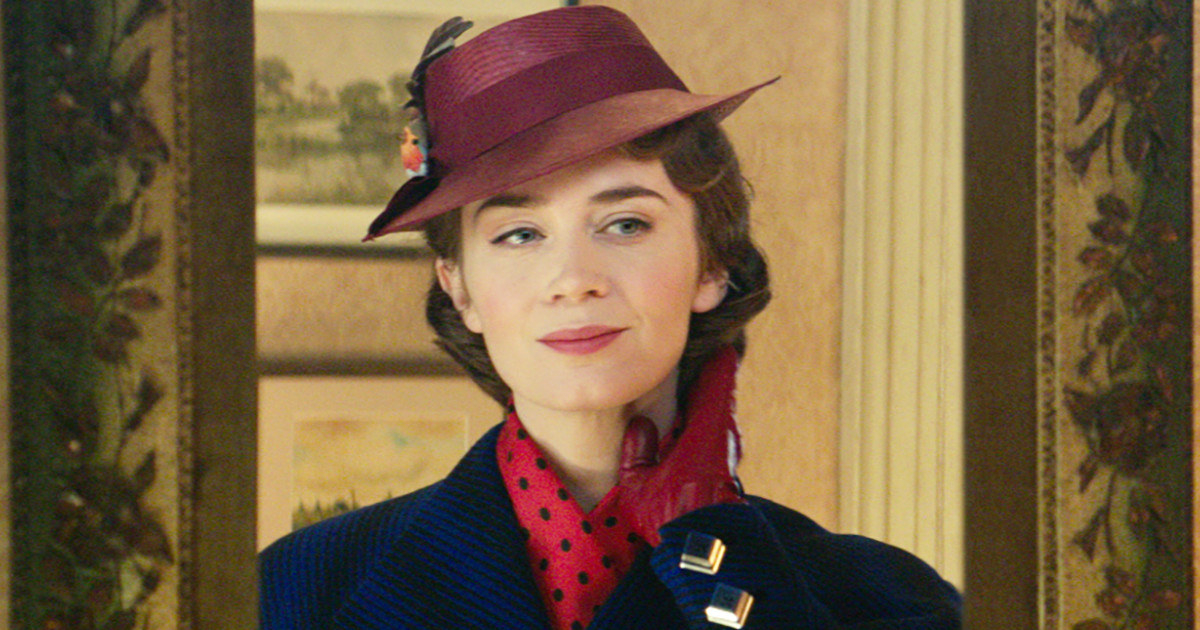 When all is wrong in the world, just look up and know that things are going to be okay because Mary Poppins is back.  Mary Poppins Returns is a film that probably shouldn’t exist, but we should all be thankful that it does. For me, this wasn’t something very high on my radar, as the classic 1964 movie was only memorable because of Julie Andrews’ Oscar-winning performance. But I’m not blind to how much it’s beloved by others, and for Disney to mount a sequel seemed like something Poppins herself might regard as rubbish.

Color me shocked when Mary Poppins Returns managed to sing and dance and fly and swim it’s way into my heart, mostly due to Emily Blunt’s winking performance as the magical problem-solving nanny. It wouldn’t be fair to compare her to Andrews; let’s just say Blunt has a cheekiness and a whimsy that is captivating. And I like that her Mary Poppins is just the tiniest bit vain. Okay, maybe not so tiny. When she comes hovering down from the clouds, good cheer sweeps in right behind her, as well as a bit of old school charm. This is an unabashedly earnest and good-hearted musical; please toss your cynicism into the fireplace as kindling.

The storyline will be familiar, not just to the original movie but to anyone who has seen a live-action Winnie the Pooh movie over the last year. When adults forget what it’s like to be a kid, it’s up to their fictional (??) friends to slap some sense back in.  Set some thirty years after Mary Poppins first enchanted the Banks clan, the now grown-up Michael (Ben Whishaw) and Jane (Emily Mortimer) are struggling with the hardships that come with being adults. As before, economic fear plays a role, but so does life-and-death tragedy. Michael’s wife has recently passed, leaving him a widower with three small kids to tend for. Worse, he’s on the verge of losing their home at London’s 17 Cherry Tree Lane to the bank, lorded over by a villainous Colin Firth.

Michael’s children are basically stowaways on whatever extraordinary journey she takes them on, whether it’s a deep dive into a bathtub that doubles as the ocean depths, or through a magical vase where talking animals hold their own stage shows. The adult Banks’ aren’t nearly as happy to see Mary Poppins swooping down into their life once again, refusing to believe the extraordinary things they saw her do were real. Practically doing somersaults to see her, though? Lin-Manuel Miranda as Jack, a toe-tapping, bright-eyed lamplighter who serves as Mary’s sidekick and dance partner through a rainbow-colored, hallucinogenic fantasy world. As she proved with director Rob Marshall’s previous Disney musical Into the Woods, Blunt can carry a strong tune, which she does in the wondrously soothing “The Place Where Lost Things Go”. Her dance skills aren’t so shabby either, seen in a saucy cabaret number that may be the film’s highlight. If she’s enthusiastic, Miranda is literally in the clouds, a smile never leaving his face as he scats from one surreal number to the next. Not all of the songs have the feel of instant classics, though. You’ll quickly grow tired of the buzzy but derivative “Trip A Little Light Fantastic”, while Whishaw’s melancholic “A Conversation” is too much of a downer too soon.  On the other hand, Meryl Streep provides some topsy-turvy thrills in her as one of Mary’s eccentric cousins.

I won’t nitpick the small stuff. Mary Poppins Returns wasn’t supposed to delight me at all, and yet it had me soaring like so many kites and balloons.