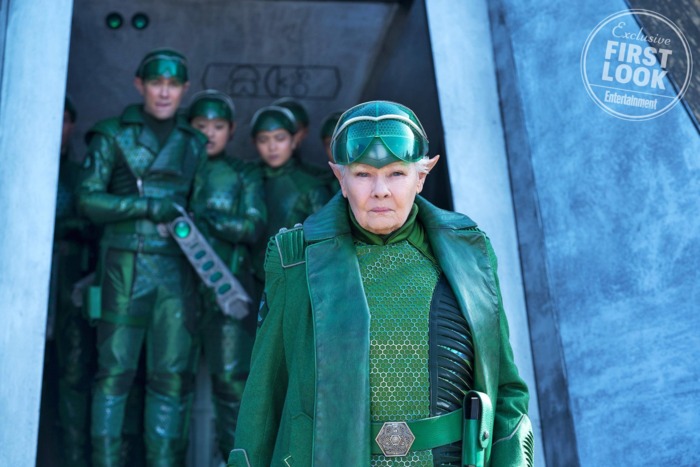 When you need someone to play a fearsome long-eared fairy commander, the first person you’d think of is Dame Judi Dench, right? For Kenneth Branagh, who has worked with the legendary actress on multiple occasions, she was a perfect choice. He tells EW as part of their piece revealing the first look at Dench in Artemis Fowl, that she commanded the cast’s respect right from the start…

“When we started to rehearse, she leant forward, and her shoulders stooped and her voice dropped, and then suddenly this gravelly, Churchillian, curmudgeonly figure started to emerge…I saw all of those actors suddenly, naturally go to attention when they saw Judi, who had this swagger and this cool, who had this great leather coat, who carried the authority quite so effortlessly. She walked out of the craft, looked up at the house, and said [in an Irish accent], ‘Top of the mornin’.’ It was a real sense of a memorable character walking into a movie and owning it, saying ‘I love my clothes, I love my look, I’m in charge, and I’m here to make mischief.’”


Dench plays Commander Root, leader of the LEPrecon fairy police force. The story follows a teenage criminal mastermind who starts a war with a powerful race of fairies in hopes that it will help to find his missing father.  The cast is led by Ferdia Shaw and co-stars Nonso Anozie, Lara McDonnell, Hong Chau, and Josh Gad, but it’s this crazy image of Dench that tells us everything we need to know about how much fun this movie could be.