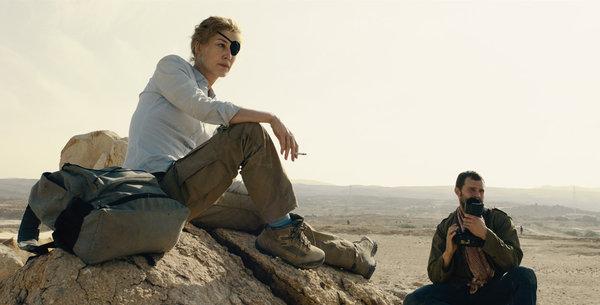 While the job title of ‘War Correspondent’ has been well known since the Vietnam War (with military journalists mostly taking the role in World War II, with little to no civilian involvement), it’s mostly come to wide recognition during and following the Gulf War in the early 90’s…the first time a war was covered live with the 24 hour news cycles. I may be ignorant, but I always had the idea of these men and woman being attached to units that were in danger, yes, but not in the thick of it, gathering the story from a somewhat less dangerous position. A Private War serves a dual purpose; first it serves to shine a light on Marie Colvin (Rosamund Pike) a legend in the field and a thoroughly badass human being, second it continues her mission and gives a realistic look and the ground level events she was trying to make known to the rest of the world, mainly the decades of tragedy in Syria. The film follows Colvin from the turn of the century during an assignment in Sri Lanka that ended up costing her an eye and lead to the distinctive eye patch, which did nothing to hurt her eventual legendary status. Just to really nail home the type of woman this was the film points out that Colvin lost an eye….and then still delivered a 3000 word story by her assigned deadline. Guess I’ll think twice before calling in sick because of a tickle in my throat next time. We continue through the high and low lights of the next decade in her career, from an interview with Ghadafi, to her strained attempt at balance. Wanting a family life but being unable to dull the call of the front lines. It shows Colvin as a woman deeply affected by PTSD but fighting through to speak for those who can’t speak for themselves nonetheless. Colvin lost her life in 2012 during the siege of Homs while reporting on the starving families that were being deprived of food, and we stay with her right until the end.

Rosamund Pike was an excellent choice by director Matthew Heineman, who’s already made a name for himself with the astounding documentaries Cartel Land and City of Ghosts both of which were made with the same fearless spirit Colvin was known for making Heineman uniquely qualified to tell her story. Pike, who’s tall, blonde and beautiful, carries with her that air of competency that lets you know she is not going to be anyone’s damsel in distress. She’s a wonderful actress but it’s this unique quality that really makes her a fit for the role. Heineman and Pike together, along with some amazing support from Stanely Tucci, who plays Colvin’s boyfriend, and Tom Hollander as her editor deliver a film that’s engrossing for it’s entertainment purposes but also makes you feel more worldly when you’re done, like you’ve learned something you felt bad for not already knowing.

Heineman does something with the film that’s subtle enough to be overlooked but I found to be one of the most important. He devotes time and thought to the subjects of Colvin’s story, the people she constantly put her life on the line to protect. It’s by way of little touches but their important none the less. Generally speaking, in films like this the westerner is the prime focus and the background players are no more than that…set dressing. A Private War, however, takes it’s time to deliver not just detail about those around Colvin while on the front lines but deliver detail that’s accurate. It would have been easy to simply gloss over every soldier, translator, doctor and embattled civilian but Heineman really strives to give them a real identity in the film, and that in itself, seems like proof enough that he made this film with the intention of respecting the life goals of Marie Colvin.
While A Private War seems a bit like a film divided, not knowing whether to devote it’s time to Colvin’s personal struggles or the bigger picture of the injustices she was trying to highlight, I think that this is oddly appropriate and helps to reflect Colvin’s internal struggles. This film is not going to leave you with a smile on your face and a sunny outlook on the world but it does remind you that there are people out there, just like you, who devote themselves to something larger. People that are driven to help those who can’t help themselves. Marie Colvin is a name that I hadn’t heard before I saw this film and I thank Heineman and Pike for bringing her to life so the sacrifices and the spirit of this amazing person are brought to life.
Rating: 3.5 Out of 5