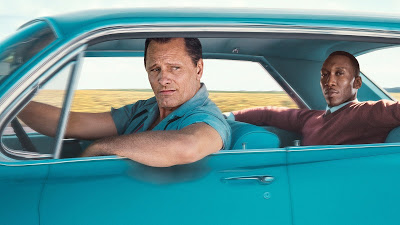 
The Negro Motorist Green Book is a pamphlet, a guide used in the pre-Civil Rights era that provides African-American travelers with information on hotels, eateries, and more where they will be welcome. In the Deep South with Jim Crow laws very much in effect, a green book was a necessity, but it’s very much a relic from a time gone by, although recent events would suggest maybe it’s time to bring back a modernized version of the “traveling while black” guide. But for the most part, people nowadays have never heard of a green book, and at this weekend’s Middleburg screening of Peter Farrelly’s hilarious, soulful, and perceptive Green Book its existence anchored the road trip comedy with an unexpected emotional weight.

That its directed by Peter Farrelly, one half of the duo best known for putting Ben Stiller’s splooge in Cameron Diaz’s hair, is just one of many surprises that emerge in this tricky film as it tackles heavy issues with comedy both broad and subtle. Viggo Mortensen shifts into Italian mobster mode as Tony Lip, a New York bouncer with street smart, a mean right hook, and an attitude straight out of The Sopranos or The Godfather. Ironic because the real-life Tony Lip, Anthony Vallelonga, actually appeared in both of those mob classics. It’s 1962 and Tony has no particular love for black people, evidenced by an encounter early on when he throws away glasses of water sipped by two black repairmen in his home. But he also needs a job, and when the offer is made to drive virtuoso pianist Don Shirley (Mahershala Ali) through a tour of the South, Tony’s up for it…after convincing the wife (Linda Cardellini) that it’s worth the two-month long absence.

Don is an interesting cat; not only to Tony but to us. We first meet him in his home above Carnegie Hall; a museum of fine antiquities and tribal novelties, the man literally sits on a throne and has a servant at his beck and call. He’s like a real-life T’Challa from Black Panther, with a regal air about him that is as opposite of Tony as it possibly could be. The job requires from Tony more than just skills behind the wheel; he’ll need to be Don’s assistant, chauffeur, but most importantly, his protection.

Mortensen and Ali have chemistry right off the bat, even as their characters are like oil and water. The former brings a certain street-level credibility to the role of Tony, a hard case with a racist streak that could make him tough to like. But he’s honest and surprisingly intuitive, even when he’s being an idiot. Tony’s claim that he is “blacker” than Shirley because he is more familiar with mainstream black musicians is a particularly narrow-minded, but it’s tempered with humor involving their first stop at a Kentucky Fried Chicken. It’s there that Shirley daintily has his first piece of chicken ever, and you can see his distaste at giving in to what he sees as a racial stereotype. But that whole sequence shows us, in tongue in cheek fashion, Shirley’s many conflicts with identity. Unable to fit in with black people who don’t understand his cultured talents, discriminated by the rich white people who pay to hear him play, and prejudiced in other ways soon to be revealed. Shirley is as complicated as Tony is easy to figure out, but as you probably guessed it’s their differences that open up new worlds for them both.

This is classic Golden era filmmaking, jazzy (the soundtrack features multiple hidden gems from the era), and well-produced with aspirations to entertain and enlighten.This isn’t a complicated movie and the trajectory we know before Tony and Don have driven a single mile. We know that Tony will jump into a brawl, maybe two or three, to save Don from racist cops or drunks looking for a fight. We know they will have a big blowup at some point, only to find common ground that brings them back together.  That so much of what these two go through parallels the problems of today is indeed heartbreaking, but Farrelly balances it with a dose of humor so it goes down smooth. And this is a really funny movie, like laugh out loud funny from start to finish. I’ve never been a huge fan of the Farrellys as a duo but I like what Peter is doing on his own here, telling a meaningful story about the power of friendship to overcome fear and hatred.  None of what happens will surprise you but Green Book isn’t looking to do that, anyway. Sometimes it’s a comfort to have a movie with a happy ending that you know is coming, and yet you still yearn for it. Green Book takes us on a journey we hardly need a map to navigate, and the comfort we feel at the destination is everything we hoped it to be.