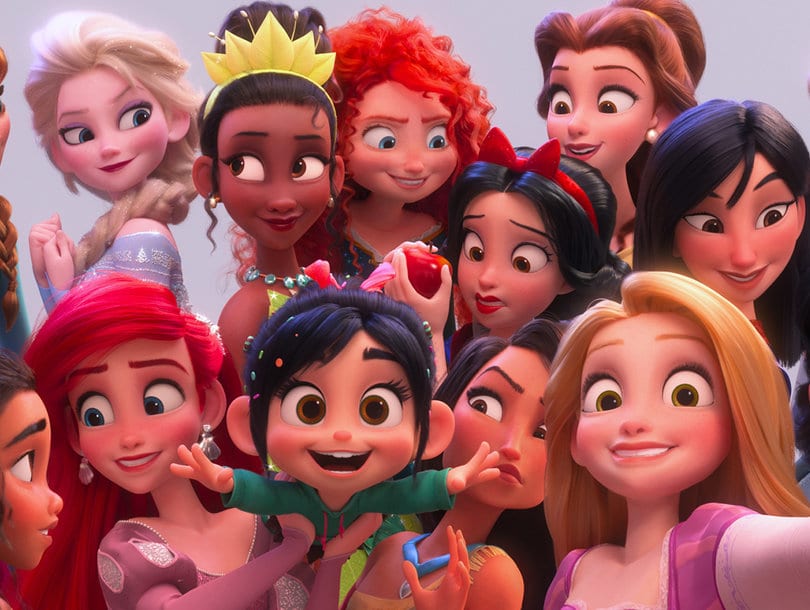 1. Ralph Breaks the Internet (review)- $55.6M/$84.4M
Disney doesn’t do a lot of animated sequels, but when they do they’re big. Six years after Wreck-It Ralph, Disney’s Ralph Breaks the Internet earned a high score of $84M over five days, among the top three debuts for Thanksgiving weekend. This was huge because I’m not sure there was an immediate desire for another Ralph movie until we started seeing promos for this one. The Internet conceit was a lot of fun and Disney played up their many brands all the way to the hilt. And of course the Disney princesses scene was a brilliant marketing move because who wouldn’t see that historic moment on the big screen? Worldwide it’s hauled in $125M, and I’m doubtful it’ll approach the $471M of its predecessor, but this is a good number that should keep the Mouse House happy until next month’s Mary Poppins Returns.
2. Creed II (review)- $35.2M/$55.8M
Creed II came out the box swinging this Thanksgiving week with $55M over the five days, the biggest ever for a live-action film over this period. The film worked as both a sequel to Ryan Coogler’s Creed from three years ago and a sequel to Rocky IV, becoming the highest-grossing debut of the entire franchise. Despite some criticisms, including my own, that the “return of Drago” premise was kinda cheesy, I think it actually worked in hooking audiences from across the age spectrum.
3. Dr. Seuss’ The Grinch– $30.2M/$180.4M
4. Fantastic Beasts: The Crimes of Grindelwald– $29.6M/$117.1M
It was a rough second week for Fantastic Beasts: The Crimes of Grindelwald. The Potterverse sequel fell 52% from last week and has earned just $117M over the first 10 days domestically. That’s not great, and a far cry from the first movie which ended its stateside run with $234M. Doubtful this comes anywhere near that. On the plus side, overseas is where it’s making a killing with $322M, for a worldwide total of $439M. That number will keep JK Rowling’s franchise rolling right along, and I continue to think we will see them swap out that box office-killing Johnny Depp. I think his presence has had a detrimental effect that Warner Bros. will seek to correct.
5. Bohemian Rhapsody– $13.8M/$152M
Incredibly, the Queen biopic Bohemian Rhapsody has earned $472M worldwide, surpassing the $441M by La La Land and $434M by The Greatest Showman. This show isn’t nearly over, and we could be looking at $600M when all is said and done.
6. Instant Family– $12.5M/$35.7M
7. Robin Hood (review)- $9.1M/$14.2M
I don’t know if anybody other than Lionsgate was hoping for a new Robin Hood franchise, but they’re going to be very disappointed. It was a frankly disastrous debut for this updated Robin Hood starring Taron Egerton and Jamie Foxx. A $9.1M domestic debut is about as bad as it gets for a major studio blockbuster opening in 2800 screens. My review and the majority of reviews speak to how awful this film was, but I want to where the demand for it was to begin with? Who said, “Hey, it’s time to update Robin Hood for a new generation? And let’s open it on the most competitive weekend of the year!”  Jamie Foxx has never been a box office draw but I think there was some hope for Egerton following the Kingsman films. This all but dashes those hopes against the rocks.
8. Widows– $7.9M/$25.5M
9. Green Book (review)- $5.4M/$7.8M
It was a big leap into the top 10 for Green Book, which added over 1000 screens and earned $5.4M in the second weekend. The crowd-pleasing road trip film stars Viggo Mortensen as a New York City bouncer, and Mahershala Ali as a classically trained pianist, as they drive through 1960s era Deep South. I see it as the clear frontrunner for Best Picture and those high Oscars aspirations should power it along for a few more weeks at least.
10. A Star is Born– $3M/$191M