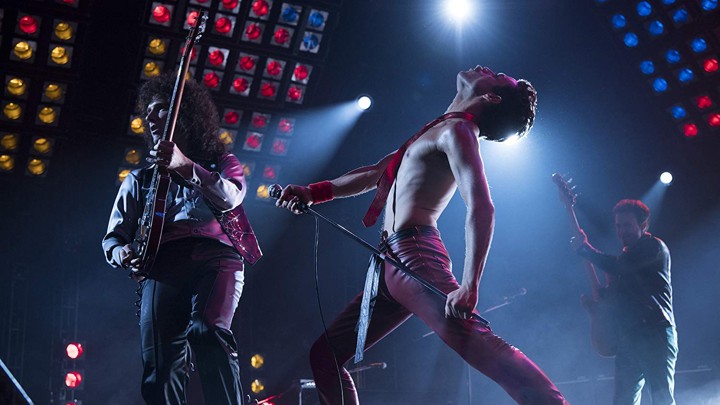 1. Bohemian Rhapsody (review)- $50M
Bohemian Rhapsody was one of those films that I don’t think the reviews were ever going to matter. Young or old, you’re likely familiar with their iconic, anthemic music and even a lousy biopic wasn’t going to hurt that. So it comes as no surprise to me that the film opened at #1, although the $50M haul is far more than I expected. The film has had its share of difficulties reaching this massive debut, too. From Bryan Singer’s departure to complaints about its glossing over of Freddie Mercury’s sexuality, to complaints the band’s remaining members were too involved to get a truly accurate picture. None of it mattered. Rami Malek’s performance as Mercury stirred the imagination of audiences and possibly has put him in the Best Actor race, meaning this could be a long stretch in theaters. We haven’t seen numbers like this for a music biopic since Straight Outta Compton, which also rode the wave of Oscar buzz.  Worldwide it has $141M, blowing away the $52M budget.
2. The Nutcracker and the Four Realms (review)- $20M
Disney experiences their first big flop since they started with their live-action fairy tale remakes. The Nutcracker and the Four Realms opened with just $20M domestic, for a total of $58.5M worldwide. That’s a rough start for the $130M film, which Disney hoped would become an annual holiday staple, and who knows? Perhaps it will in time. Disney films don’t exactly vanish the way others do; and I suspect this will be one that earns most of its money in home release and not in theaters.
3. Nobody’s Fool– $14M
Tyler Perry’s first R-rated comedy, Nobody’s Fool, opened with a mediocre $14M. That’s mediocre for a Perry film, especially when you look at his glory days in the early 2000s, and I think we’re still figuring Tiffany Haddish’s value as a lead. She and Kevin Hart opened Night School to $26M a few weeks ago, but she also had The Oath which didn’t generate much buzz despite her presence.
4. A Star is Born– $11.1M/$165.6M
Riding the wave of good reviews and Oscars aspirations, A Star is Born dropped just 20% and has now hit $165M domestic, with $300M worldwide in its sights.
5. Halloween– $11M/$150.4M
6. Venom– $7.8M/$198.6M
Sony’s Venom flick is not only closing in on $200M domestic, but it has hit $541M worldwide, putting it in the same territory as Andrew Garfield’s The Amazing Spider-Man movies. Uhhh, tell me again why they felt the need to loan Spidey to Marvel?  Seems like a dumb move in retrospect, doesn’t it?
7. Smallfoot– $3.8M/$77.4M
8. Goosebumps 2: Haunted Halloween– $3.7M/$43.8M
9. Hunter Killer– $3.5M/$12.9M
10. The Hate U Give– $3.4M/$23.4M