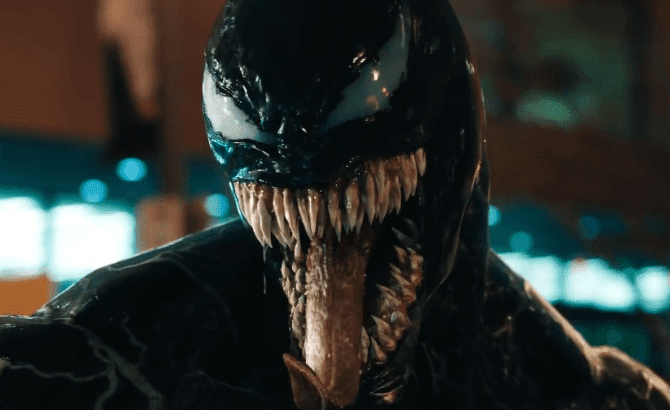 Sony has been trying to get a Venom movie off the ground, in various forms, for years. Ever since his much-maligned debut in Spider-Man 3, it was clear the character has potential and is a great screen visual, but the question was always how you make a vicious brain-eating symbiote work as a hero worth following? And is he the right character for Sony to launch their dubious cinematic universe of Spider-Man supporting characters? Now that Venom is finally out and ready to dominate the box office this weekend, I can say that I still don’t know the answer to that last question. But I do know the answer to the first, and it’s to let this batshit crazy character’s freak flag fly.

Venom is a severely flawed movie in a lot of different ways, but I’ll be damned if the gonzo back-and-forth between Tom Hardy’s journalist Eddie Brock and the alien symbiote wasn’t a lot of twisted fun, and certainly unlike anything you’re going to get from Marvel Studios. The film works better when viewed as a dark superhero buddy comedy, as Hardy’s wacko exchanges with himself illicit laughs both intentional and some definitely unintentional. In retrospect we shouldn’t be surprised Venom is being played up for laughs; the film was directed by Ruben Fleischer, whose claim to fame is a little zombie comedy you might’ve heard of called Zombieland. The tones are different but the aims are the same. If you can live with this not being the gritty psycho-thriller promised in trailers then Venom may surprise you with how entertaining it can be.

The story is riddled with characters that make no sense, and if you spend too much time thinking about them this will never work for you. The first is Hardy’s Eddie Brock, a San Francisco investigative journalist who is flying high. He’s got his own news show, a terrific fiancée in Anne Weying (Michelle Williams in a terrible wig), and respect throughout his profession. Once you see Eddie in action none of this makes sense. He’s a terrible investigator, and the script does little to convince us he could have ever been a good one. Eddie gets a little too deep investigating the mysterious Life Corporation and its founder, Carlton Drake (Riz Ahmed, playing an evil Elon Musk), who is rumored to be using homeless people as guinea pigs. It costs Brock his job, but also Anne whose trust he betrayed in the process. Months later down ‘n out Eddie gets a shot at redemption when a scientist (Jenny Slate, needing much more to do) tells him his suspicions about Drake were right. He’s doing unethical things to research some weird alien goo he’s found. The alien needs a host to survive but finding a match has proven difficult. When Eddie busts in to investigate, he ends up bonding with the alien symbiote, and lo and behold it’s a perfect match.

Up until this point the film is pretty terrible, admittedly. Eddie’s fall from grace is rushed through, he and Anne have zero chemistry, and Drake is given some flat-out awful supervillain dialogue that Ahmed chooses to ham up when he needs to be menacing. But when Eddie and Venom merge it’s like the weirdest episode of The Odd Couple ever and a total blast. The alien, who actually announces himself as Venom, is a creature of pure homicidal tendencies and love for eating human heads. But he’s also quite the joker, calling Eddie a “loser” pretty early on, and a “pussy” for refusing to jump out of a skyscraper window. Mostly Venom is great when he’s making observations about the world and the people in Eddie’s life, “Awwww, sweet”,  he says after a tender moment with Anne. When not threatening to devour the head of every human he sees (“So many snacks, so little time!”), Venom is learning about Earth and why it’s worthy of protecting. Their unique partnership is both hilarious and a great visual, with the slimy symbiote oozing out of every pore and frequently staring Eddie right in the face. It’s a great role for Hardy, who puts Bane to shame with his unintelligible mumbling, and he gets to do it to himself this time! Perfect! He’s great to watch because the performance demands such incredible body control, having to play a man who is sometimes in control of his body mostly not. When Eddie walks, you can see him looking as if he wants to go one direction, only for the symbiote to exert control and yank him in another, and the look on his face is priceless every time this happens.  The best may be a scene where a totally shocked Eddie loses control at a seafood restaurant and…well, let’s just say he orders the lobster, as fresh as it can be.

When fully formed Venom strikes an imposing image, like a shadowy mirror Spider-Man who has spent too much time at the gym. The special effects aren’t great, and in some of the bigger fight scenes can look pretty sloppy, but cinematographer and Darren Aronofsky favorite Matthew Libatique captures some great nocturnal shots of Venom in action. A highlight involves a quiet moment atop one of the city’s tallest buildings, after he’s scaled it like an intergalactic King Kong. Sony took a lot of heat for the PG-13 rating, after spending months teasing an ‘R’, and it’s impossible not to think about each time someone gets carved up, or a head gets eaten, and there’s not a drop of blood anywhere.

Sony is banking a lot on Venom being a success. They don’t want this to be another missed opportunity like the entire Andrew Garfield era turned out to be. And honestly, they also need to prove they are capable of something like this without leaning on Marvel Studios for help. Let’s not forget, when Tom Holland’s time in the MCU is done Spider-Man is right back under Sony’s care and they are hoping to have this whole universe ready and waiting. For that to happen they need Venom to be a launching pad to their other projects, many of which are already in the works. The film has a ton of individual problems but it nails the one thing it really needs to, and that is the Jekyll and Hyde dynamic between Eddie Brock and Venom. It’s so off-the-chain wild that I think audiences may want to come back and see more, and as long as Tom Hardy returns it’ll be worth it.

Trav’s Tip: Of course you’re going to stay for the mid-credits scene, which has an important character debut. Stay all the way through and Sony gives you a lengthy teaser for animated film Spider-Man: Into the Spider-Verse.