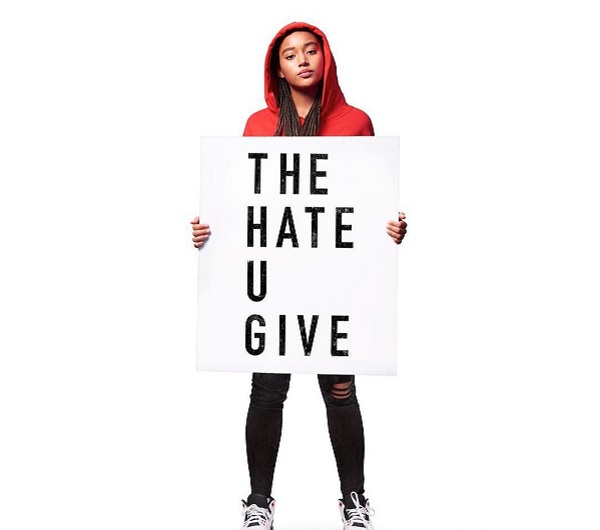 Just when you thought that the age of the YA film was over, we get an adaptation of a YA book that completely knocks it out of the park!

Not by dealing with those post-apocalyptic future storylines that have outlived their usefulness, but instead sticking with something we see on the headlines daily, and showing us the lives of young people of color for a change.  Inspired by the murder of Oscar Grant (there have been so many unarmed black people killed by police you have to google his to remember the specifics) and countless others, author Angie Thomas wrote a complex story that ended up on the New York Times Best-Seller list for 50+ weeks and captivated the nation as it dealt with the harsh realities of being black in America.

It’s actually surprising that The Hate U Give would get a theatrical adaptation.  There haven’t been that many movies that have honestly dealt with such a raw topic.  After all, it’s already to not only see this constantly in the headlines and see the actual footage on social media nowadays.  Who wants to see such a painful thing show up on the big screen, where we usually go for escapism from the problems of our real lives.  In addition to such a touchy subject, The Hate U Give also needs to be a good film.  Needless to say, this film absolutely is essential viewing. 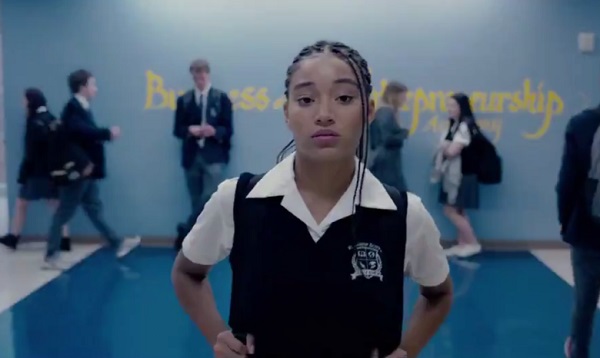 The film opens with “The Talk,” which most African Americans are familiar with and every parent has to painfully explain to their children.  The unfair and harsh reality that you as a person of color have to operate by a different set of rules when dealing with the police as your life depends on it as you interact with them.  We are introduced to Star (Amandla Stenberg), a young high school girl who has to navigate in two different worlds.  The first is Star in her regular life where she lives in Garden Heights, a predominately black neighborhood with her family.  He father Maverick (Russell Hornsby), a reformed ex-gang member who went to jail after taking the fall for another member in his crew has turned his life around and is a small business owner and wants his family to have deep roots in their community despite his wife Lisa (Regina Hall) wanting to move out of the neighborhood as it’s been plagued with drug and gang violence in recent years.  Warts an all, Garden Heights is still home, and it’s where she is relaxed and the most like her true self.  The other version of Star is Star 2.0, the high school version.  She goes to an elite and mostly white school on the other side of town where she practices “code-switching,” where she can’t appear too “ghetto” to her white counterparts as she has to function in “their world.”  Star is the model student, good grades, basketball player, even has a white boyfriend and the two of them deeply care for each other.  Star has managed to keep those two personalities separate and live a comfortable life, until an unfortunate event happens. 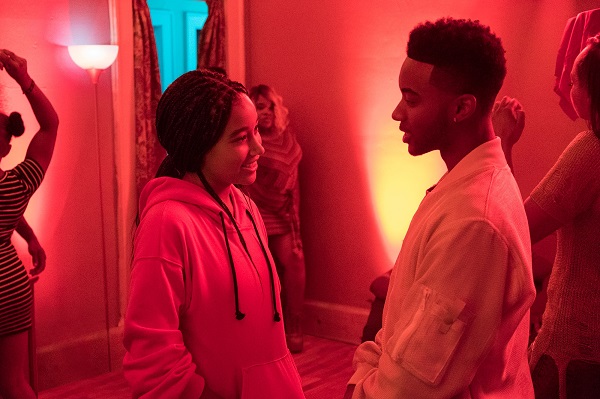 While at a house party in Garden Heights, she runs into childhood friend Khalil (Algee Smith), whom she has not seen since they were younger.  As the two reconnect and are having a good time, a fight breaks out at the party, which leads to shots going off.  Khalil escorts his friend out of the party and they take a ride home.  The two manage to bond even more over their times and even display possible romantic affections towards each other now that they are older and no longer little kids playing Harry Potter with each other.  Unfortunately, Khalil’s car gets pulled over by the police for “failure to use the turn signal.”  As seen from the trailer, Khalil grabs a hairbrush to brush his hair during the traffic stop and is gunned down by the officer.

From there on, that perfect world that she managed to keep all these years comes crashing down.  She has to deal with the PTSD of seeing her friend killed by the police, her being detained by the police and the harsh interrogation by the police afterward.  She’s now the sole witness to the crime and will probably be summoned to a grand jury for an upcoming trial.  And she has to do all this while still maintaining those two different lives.  Will her white classmates understand what it means to be a black person?  Will her boyfriend?  Author James Baldwin famously said, “to be a Negro in this country and to be relatively conscious is to be in a rage almost all the time.”  Star perfectly captivates that sentence in this film as the cruel realities of life as it seems as though the walls are closing in on her.  Her white peers don’t understand, as evidenced by one of her friends Hailey (Sabrina Carpenter) giving her the “All Lives Matter” approach to the situation, even though they all don’t know she’s the witness to the crime.  Her friends want to stage Black Lives Matter “protests,” just so they can skip school.  Her uncle Carlos (Common) is a police officer who has to navigate both worlds, but tends to be more on the police’s side of the argument as evidenced by a heartbreaking conversation he has with her about what he would do in the same situation and even more heartbreaking when he honestly tells her what he would have done if the suspect was white.  Persuaded to use her voice an testify by a local community organizer April (Issa Rae), Star wants to honor Khalil the best way she can, which puts a target on her back from the local gang leader King (Anthony Mackie), as Khalil was a member of them, and King doesn’t appreciate “snitches.” 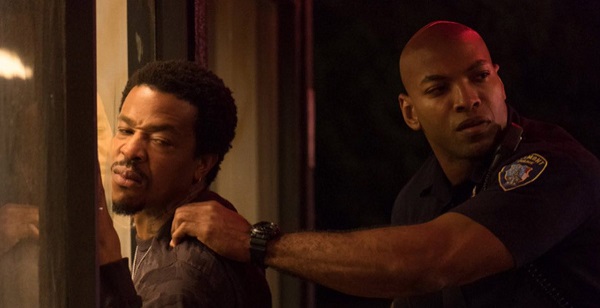 What makes The Hate U Give good is how honest and raw the film is.  The entire cast gives it their best.  Regina Hall, who is mostly known for her comedic bits delivers a strong performance as Star’s mother, who only wants to make sure that the children are safe and come home to her.  Russell Hornsby as Star’s father gives a strong performance as her father who from a young age prepared her for the life she would possibly have.  Everything from having “the talk” to instilling the Black Panther’s 10-Point program.  Their family is extremely blended (to the point of confusion) as Star has half and adjacent siblings, but her mother and father honor and respect each child, even if they aren’t their own children biologically as they help keep their rather large family together in light of the tragedy.  Star’s boyfriend Chris (KJ Apa) actually also has a unique presence in the film.  At first, he just seems whiney as he wants to be more involved in her life on the weekends as he cares for her.  Being white, he doesn’t understand what it’s like to be black, and while he first says he “doesn’t see color,” he quickly changes his worldview and tries empathy, something her other white friend doesn’t do.  Chris ends up a kind of unspoken MVP as he’s there for Star when she absolutely needs it and he gives her the space to do what she needs to do without involving himself.  There is a very funny “Guess Who’s Coming To Dinner” moment when Star’s father finally meets Chris and while interracial dating at this point is a societal norm, it’s still funny to see Russell Hornsby interacting with KJ Apa for that scene, one of the few comedic moments in an overly dramatic film.  One person who took some getting used to was Anthony Mackie as a local kingpin of one of the gangs.  It’s not that his performance was bad, it’s just that we are used to seeing him as either Clarence from 8 Mile or Falcon from all the Marvel Cinematic Universe films.  He just doesn’t “feel” like the bad guy, but he manages to win you over with how menacing he is later in the film.  Of course, the true star of the film is Star herself.  Amandla Stenberg delivers the best performance of her career.  She goes through just about every emotion in the film and in a perfect world, there would be Oscar buzz surrounding her for this film.  Stenberg herself is very “woke” in real life and has spoken out about various issues.  It’s also good to see she found a role that works with her personal politics as well and it helps deliver a strong performance. 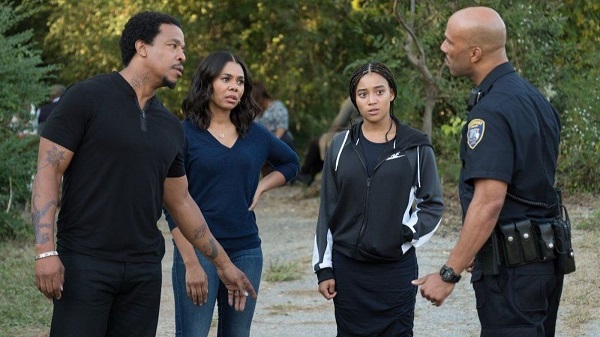 With a third act ripped straight from the headlines, The Hate U Give will break your heart as well as give you hope as you see the real life that so many African-Americans have to deal with on a regular basis on the big screen in an honest and strong way, yet find a way to move forward.  Director George Tillman Jr. captures the drama effectively, also shoots the chaotic nature of a protest-turned-riot very efficiently.  The film not only deals with the subject of police shootings of African-Americans, but also shows us the nature of code-switching and the trouble of maintaining two different identities, something many African-Americans have to deal with constantly, whether it’s at school, or at work, being the “model minority” is taxiing, especially when those two worlds have to collide with each other.  While this is a YA story, it doesn’t feel like one.  It’s more universal, and grounded in our very own real world, which is what makes this such a powerful film.