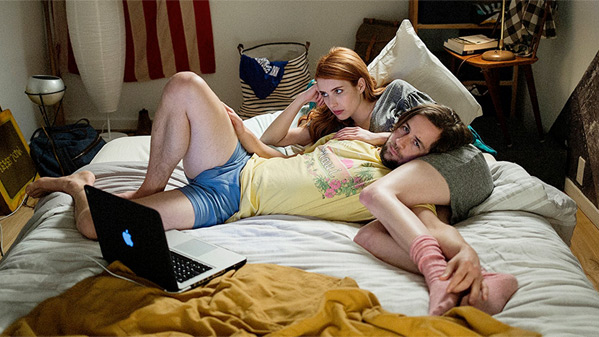 So much of Sam Boyd’s directorial debut In a Relationship will look familiar. Whether you were in a long-term relationship while in your 20s, or have just seen a lot of romantic comedies, it’s a film that many will find something to relate to as it charts two relationships at opposite ends of their life cycle. What separates this film from the rest is the exciting cast of young stars, led by Emma Roberts, Michael Angarano, Patrick Gibson, and Dree Hemingway.

Roberts and Angarano play Owen & Hallie, whose long-term relationship (presumably it’s long-term, but what does that really mean when you’re young?) has hit a rut. She’s ready to take the next step and move in together, while he’s got cold feet. Meanwhile their best friends Matt and Willa are in the exciting honeymoon phase of their relationship, and the contrasts are startling.   The film was written and directed by Boyd, based on his own short story.

Roberts and Angarano are reliably charming faces at this point, but Gibson and Hemingway could be new to a lot of people. He had his breakout role in Netflix’s The Oa, and recently impressed as the villain in The Darkest Minds. Hemingway is a model who made her acting debut in Sean Baker’s Starlet, and turned a lot of heads in Michelle Morgan’s Sundance comedy, It Happened in L.A.

In a Relationship hits theaters and VOD on November 9th.