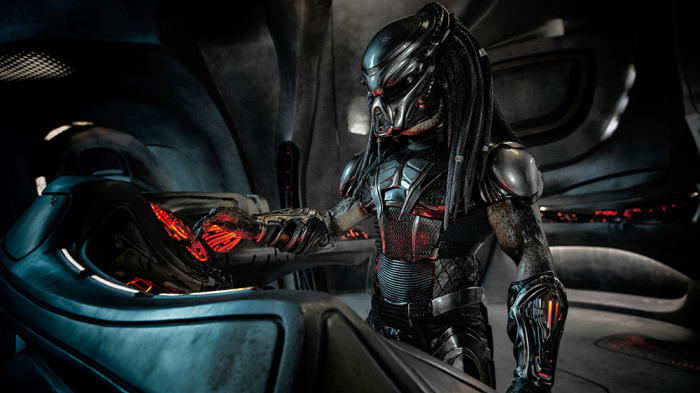 When Predator hit the scene in 1987 it landed in the thick of the most macho era for action movies in Hollywood history.  Grim faced, muscle-bound, silent action stars laid waste to their enemies with weapons bigger than their entire bodies, and we loved those movies for letting us turn our brains off for a while. But Predator was something different. Directed by ’80s staple John McTiernan, it put the protagonist on the defensive against a seemingly unstoppable alien force, and demanded the hero use more than big guns and strength to emerge victorious. The film was not only a hit, but became an instant classic that spawned sequels (all of which are successful in different ways), some unfortunate spinoffs, and an entire multimedia franchise.

The Predator is like somebody reached back into the ’80s and brought the movies of that era into the now. Violent, vulgar, and scary, it’s exactly the kind of movie we would expect from director Shane Black, who had a small role in the original Predator film back when he was just a pup in the Hollywood business. He talked his way into some uncredited scriptwork on that film, as well, and you can tell he’s been itching to get back into the Predator business. Without rebooting the franchise, he uses Predator and Predator 2 as springboards to a bigger, more contemporary story. But in its guts this is a story rooted in 1987, and that’s why it’s so much fun.

Black, who  co-wrote the script with Monster Squad writer Fred Dekker, isn’t averse to blockbuster filmmaking. While he may be known for his snappy Lethal Weapon, Kiss Kiss Bang Bang, and The Nice Guys scripts, he’s still the guy who gave us Marvel’s Iron Man 3. Black opens The Predator with an intergalactic dogfight between two warships. One is damaged, and opens a wormhole that leads it straight to a crash-landing on Earth, right in the middle of a black ops mission led by sniper Quinn McKenna, played by Charlie Hunnam-esque star Boyd Holbrook. The creature that emerges from the ship is one we recognize; ugly, fanged, oddly indigenous for a being so technologically advanced. It mops the floor with Quinn’s team, but he escapes with some of the alien’s tech. Stealing from a Predator? Not smart.

Even less smart? Sending said alien tech to your house. That’s where Quinn’s genius son Rory (Jacob Tremblay) finds it and accidentally tips the Predator to its whereabouts. But there’s an even bigger Predator out there, a souped-up hybrid the size of a friggin’ tank, that’s on the first one’s trail. Yes, there be Predator politics, but also some government conspiracy nonsense involving Sterling K. Brown as the Nicotine-gum-chewing bad guy, some mumbo-jumbo about genetic modification, a whole lot about the Autism spectrum, and even a little bit of climate change philosophizing. It’s all just cover for what Black really wants to do, which is recreate the manly camaraderie that was so much a part of the first movie.

While Olivia Munn does play a scientist caught up in this Predator mess, she’s surrounded by Quinn and a rag tag group of miscreants who call themselves “The Loonies”. Moonlight‘s Trevante Rhodes, comedian Keegan-Michael Key, Game of Thrones’ Alfie Allen, perennial tough-guy Thomas Jane, and Augusto Aguilera play the team of oddball soldiers Quinn gets lumped in with as the government tries to discredit him. They end up becoming his closest allies in the fight against the Predator and Super Predator. Of them all, it’s Rhodes who has the greatest presence as the super-cool Nebraska. He and Holbrook aren’t quite Carl Weather and Arnold Schwarzenegger, but honestly? Who the f**k could be? Black, who has always been at his best when he’s got multiple characters that can ping pong one-liners, gives each man quirks to spare. Jane’s character,  the Tourettes-afflicted Baxley, has a habit of saying the wrong thing at…well, every time. When he first encounters Munn’s Dr. Casey Brackett, he blurts out “Eat your pussy!”, which isn’t the best first impression to make. This suicidal band of brothers give the film a large part of its personality and charm, because Holbrook…well, he doesn’t have a ton of it. I always feel as if he’s snoozing through every line of delivered dialogue. He’s certainly no Schwarzenegger, but he’s not even Danny Glover or Adrien Brody. Imagine what this movie might have been if Benicio Del Toro had stuck around as originally planned!

The original Predator design is one of the coolest, most iconic in movie history. It was a terrifying force of nature in that first movie, but subsequent films have sapped some of that haunting power. The abundance of CGI in The Predator doesn’t help the cause; somehow the gigantic creature is less intimidating than the one we saw leaping through jungles 30 years ago. It works much better when the Predator is seen in shadow, or camouflaged and on the hunt, than when involved in direct confrontation.

Quibbles aside, The Predator is a worthy addition to one of the most reliable action/sci-fi franchises in history. It doesn’t come close to surpassing the original movie, but it’s nearly everything a fan of these movies could ask for, and will have you hoping the Predators pay another visit to our planet soon.