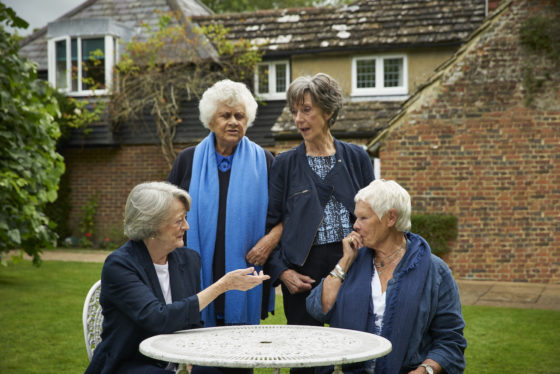 Maybe I’m mistaken, it’s been known to happen, but I don’t think documentary Tea with the Dames was targeted at guys like me. That said, is there anybody in the world who wouldn’t want to have tea and an afternoon chat with famous British actresses Judi Dench, Eileen Atkins, Maggie Smith, and Joan Plowright? Speaking of tea, these ladies spill plenty of it while discussing their legendary careers, scandalous personal lives, and what it means to grow old in the industry.

“Fuck off, Roger”, shouts Dench at director Roger Michell (Hyde Park on Hudson), when he suggests they talk about their ages.  “That’s an awful angle, it’s not fair to old ladies”, says Plowright while Smith asks the poor cinematographer if this is his first day. There are probably worse things than coming to work and being harassed by a bunch of screen legends, and at least they do it in a typically polite British way.
While they are all well into their 80s at this point, this trailer shows the energy and vitality they still possess. That tea isn’t going to hold these ladies for long, better break out the champagne.
Tea with the Dames opens September 21st.