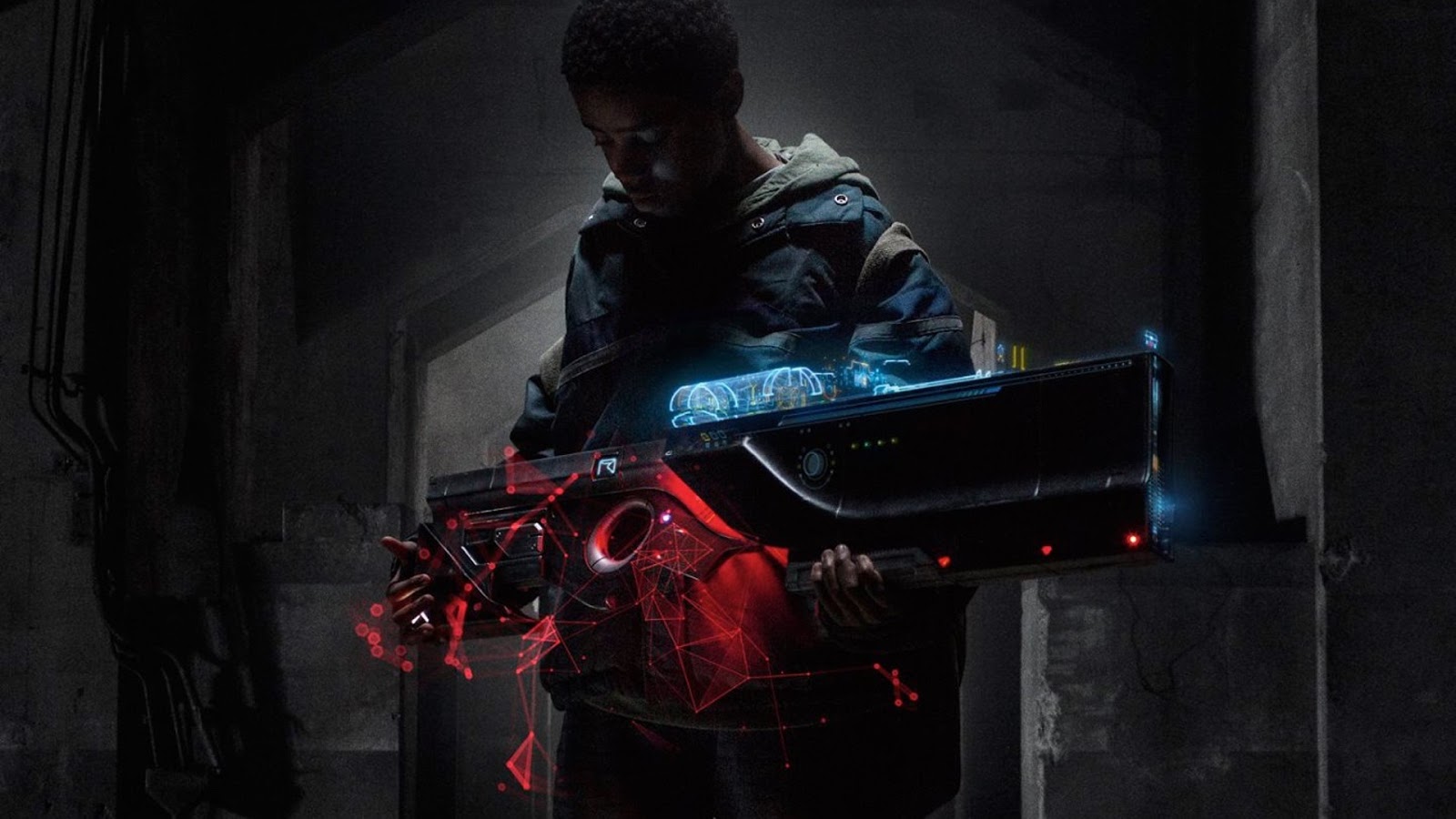 First-time directors Jonathan and Josh Baker didn’t take it easy with their feature debut, Kin, a family drama masquerading as a sci-fi action flick, road trip movie, and crime thriller all at once. The film is an expansion of their 2014 short, Bag Man, and their familiarity with the material pays off in their attention to detail and commitment to the characters, which they clearly have a genuine fondness for. While every element doesn’t totally come together, and the dialogue by writer Daniel Casey is often clunky, the Bakers’ ambition ultimately pays off in a genre film with more emotional investment than this time of year normally affords.

Detroit’s urban decay serves as the backdrop for young Eli (Myles Truitt), a black kid trying and failing to stay out of trouble. He scrounges through the many vacant buildings for wire to strip, in hopes of making more cash than the meager allowance he gets from his hard-working father, Hal (Dennis Quaid). A recent widower, Hal is struggling to raise Eli up right, and it only gets harder when his no-good son Jimmy (Jack Reynor) returns home from prison and starts making an impression on his brother. The shake-up in the family dynamic only makes things tougher for Eli, a black kid adopted into this all-white family. The isolation he feels is palpable, and Hal’s harsh life lessons only serve to drive a bigger wedge between them.

But Eli has something that could change everything. Inside of an abandoned building he’s found a powerful alien rifle, apparently part of a battle between helmeted soldiers using Detroit as their battlefield. The weapon bonds with Eli instantly, but of course he has no idea what to do with it. When Jimmy’s old habits get him in $60,000 worth of debt to criminal low-life Taylor (James Franco, a cross between his Spring Breakers character and…James Franco), it leads to a tragedy that sends him and Eli on a road trip to Tahoe, where the alien rifle comes in handy getting them out of a few tight spots. What they don’t know is that it’s also sending off a signal alerting two of the alien soldiers to its whereabouts.

It’s a pretty cool setup that someone like James Cameron might have dreamed up. Take this poor family from Detroit, give them a weapon of amazing power and obvious value, and send a couple of alien terminators, plus a psychotic crimelord, in pursuit of them. The Bakers aren’t overly enamored with the action potential in that idea, though. They put their focus on the characters, in particular the brotherly relationship between Eli and Jimmy, which grows for the first time while they are on the road. Eli begins to feel comfortable with a part of his family, while Jimmy tries to atone for a tragic incident he’s hoping to keep secret.  The only gripe I have with this is that Jimmy’s actions are downright unforgiveable, and yet they are too easily forgiven when it comes right down to it. We get it; he’s meant to be this well-meaning screwup but there are limits that I think get crossed. Early on Hal tells Eli that it’s important for a good person to do the right thing, especially when it’s hard. The Bakers smartly return to this theme on frequent occasions, especially in regards to Jimmy who, admittedly, doesn’t seem to get it.

Purely on a character level it works, even when the Bakers throw in clichéd elements that muck things up. During one of their pit stops, the brothers end up in a strip club where they meet Milly (Zoe Kravitz), the stereotypical stripper with a heart of pure gold, who instantly bonds with the boys after they use the ray gun to blow shit up and scare her mean boss.  Meanwhile, Taylor has gone from being a Detroit lowlife into a national menace, following them from state to state and causing the kind of chaos one might expect from a Marvel Universe villain. It makes no sense, and Franco is not the actor to turn to when you need a credible menace. He played a VERY similar character in the forgettable Jason Statham flick, Homefront, and it didn’t work there, either. Speaking of not really working, that the incredible Carrie Coon is barely in the movie for five minutes, and only plays a non-descript FBI agent, is an unacceptable crime. The city of Detroit plays a major part, as well, in driving every decision each character makes. Resembling a bombed-out warzone, it is a place of utter despair that breeds desperation and greed. The Bakers probably could have set Kin anywhere but using Detroit is especially powerful given the real-life circumstances for the people who live there.

A laggy midsection amps back up in the final act when Eli is confronted by the weapon’s true owners. It’s during the preceding firefight and a latter display of cosmic prowess that we see the Bakers unleash some impressive CGI effects, making use of what must have been a modest budget. No doubt taking a page from their short-film experience, the Bakers save the best for last, including a major cameo that is both worth the wait and suggestive of a wider story to tell in future installments. That’s if Kin gets a sequel, of course. Based on the groundwork laid here, with familiar ground told from a fresh perspective, the Bakers should be afforded that opportunity.