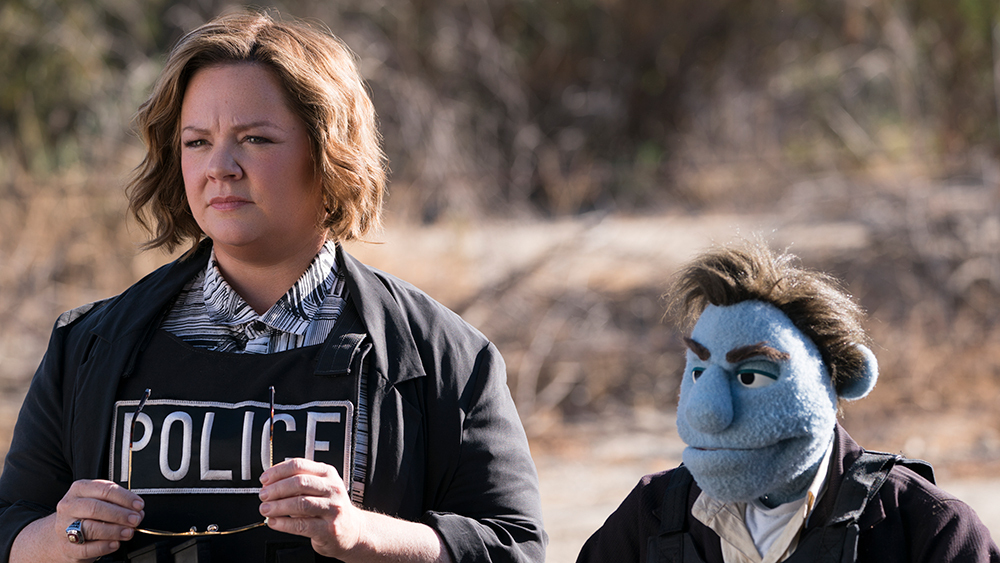 Jim Henson’s Muppets may have been a bunch of puppets that kids loved, but they were also subversive and more adult than many realize. However, I don’t think Jim ever considered the idea of a puppet octopus jerking off a cow until it sprays milk in a thousand different directions. Maybe he did, and son Brian Henson took his ideas and ran with them for The Happytime Murders. A hard R-rated film noir/comedy featuring puppets and humans living together, but not peacefully, the film is definitely one you want to save for when the kids are older. Unfortunately, by the time they are it’s doubtful anybody will look back on this film fondly.

A nifty concept better suited to a short film or skit, the one-note gag runs thin pretty quick. Clearly inspired by the works of Avenue Q, Greg the Bunny, and other adult-geared puppet satires, The Happytime Murders mostly resembles Who Framed Roger Rabbit, only with a lot more semen jokes. Bill Barretta (with that name he could be either a pro wrestler, a 1940s gumshoe, or a porn star) voices Phil Phillips, a private detective and former LAPD cop, the first puppet ever to serve and protect. The L.A. he lives in is one split by disharmony as puppets are basically free to be discriminated against openly. His stint as a cop ended in disaster, and an entire law was written in his name that prevents puppets from ever serving on the police force.

Phil is dragged back into action when a sexy new client, a sex addict with a Sharon Stone complex, strolls into his office. When a serial killer starts blowing away the puppet stars of the groundbreaking series The Happytime Gang, including Phil’s brother, he teams up with his estranged former partner Connie Edwards (Melissa McCarthy) to solve their murders.

Those who have seen Avenue Q or Team America: World Police will grow tired of the puppet sex pretty quickly, and from there the raunch is relatively tame. Henson and screenwriter Todd Berger let the freedom of doing a filthy R-rated puppet movie go to waste, never really pushing boundaries as far as they could have gone. No shortage of “fucks” and “assholes” makes this film feel as edgy as it should, and none of it really fits in the context of the slim detective yarn being spun. There are a couple of exceptions, like when Phil’s ditzy-but-loyal secretary Bubbles (Maya Rudolph, game as ever) explains the prison sex act of “pilafing” a puppet, which is grosser than it sounds. McCarthy, whose physical comedy is as reliable as ever, gets the biggest laughs by snorting sugar through a Twizzler, a puppet’s drug of choice, then going off on a drug-fueled high that has her hording jars of maple syrup.

There’s still some impressive work being done on the puppeteering front, as the Henson team are a talented bunch. The puppets blend seamlessly in the city scenes mixed with real human actors. The end credits offer a glimpse at the complicated, but hilarious, process of making the whole thing come to life and it may be the most interesting thing The Happytime Murders does.  There’s unfulfilled potential here, but it’s nothing a funnier script can’t fix. I don’t think this is the last we’ll see of Brian Henson attempting something like this, hopefully with better results.