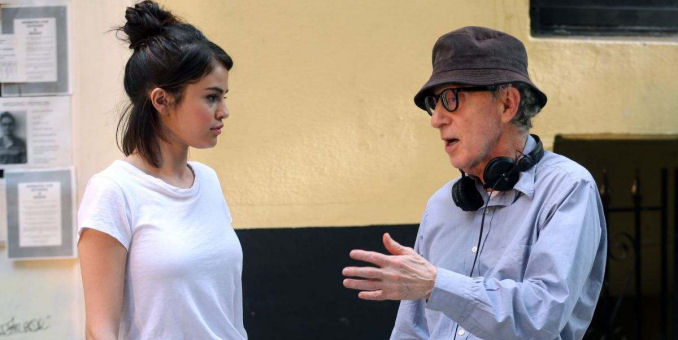 Well, it looks like that “break” Woody Allen was going to take will start…oh, right now. As speculated just yesterday, the legendary director’s next film, A Rainy Day in New York, has been shelved by Amazon Studios indefinitely.

This always seemed like the logical scenario, although there remained some chance Amazon would quietly release it later this year. The film has been under heavy scrutiny of late since past allegations of sexual abuse have resurfaced to hound the director. As usual, the cast for this was great with Timothee Chalamet, Elle Fanning, Selena Gomez, Jude Law, and more on board, but some who were involved have come to regret working with Allen. Chalamet, Hall, Gomez and co-star Griffin Newman have each spoken out against him and donated their salaries to Time’s Up.

The backlash has been devastating, and recent reports are that Allen is unable to find backing for any further projects, not to mention that actors are hesitant to work with him. The overall deal he struck with Amazon has proven to be less than benficial, as well. So far it’s produced the dreadful series Crisis in Six Scenes and last year’s disappointing drama Wonder Wheel, and clearly Amazon has decided the time is now to cut their losses and move on. [PageSix]