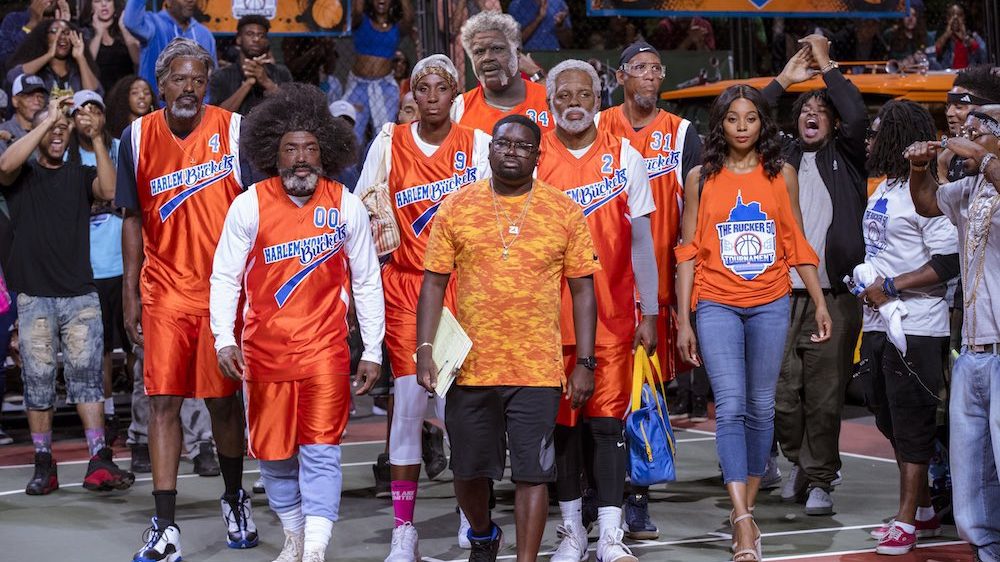 It’s not a foreign concept for characters that have brief
glimpses in movies or TV shows to get their own feature length films – we’ve
seen this countless times including some comedy heavy hitters like Zoolander, Night at the Roxbury, and the more recent Get Him to the Greek. Uncle
Drew follows in this same mold, with Kyrie Irving reprising his role as the
old school geriatric hoopster, which we’ve seen from extended Pepsi commercials
over the past couple of years, continuing on his quest to teach young-bloods the
right way to play the game. These commercials show Kyrie dressed as an old man
going to local courts and shocking players and onlookers who supposedly have no
idea what is going on, but all happen to be drinking Pepsi. The commercials
were a hit and naturally developed enough momentum for Uncle Drew to reach the
big screens. There were multiple chapters of the Uncle Drew Pepsi saga, each
one adding other hoopsters, many are past superstars of the game. Some of
the characters from the commercials – like J.B. Smoove’s Angelo – make it into
the film, but many we see in the film version are created solely
for the movie. 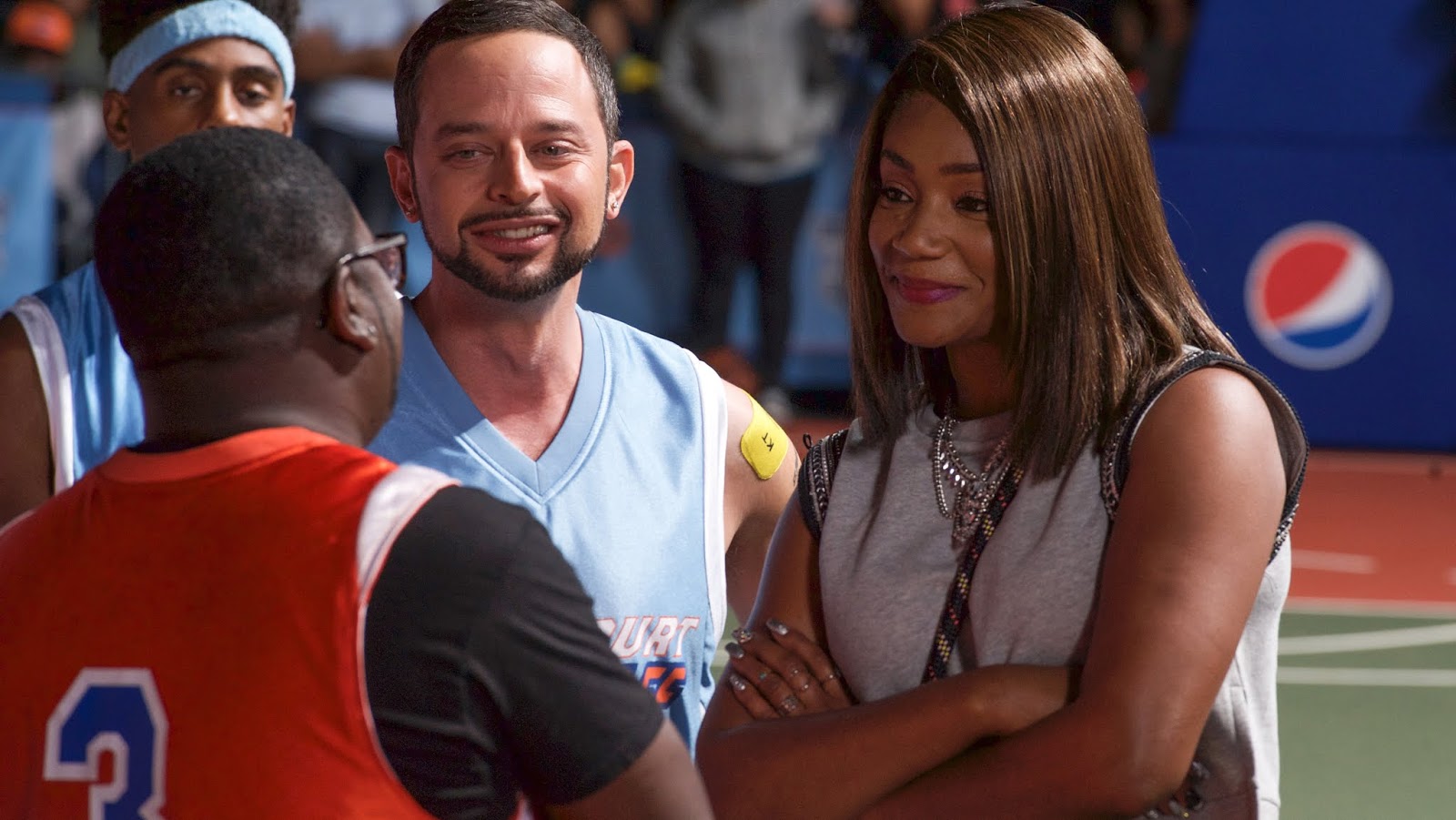 Uncle Drew
follows Dax (Lil Rel Howery), a footlocker employee who is trying to write
himself a winning lottery ticket riding the coattails of a local hoopster
Casper (Aaron Gordon). Dax has used virtually all of the money to his name to
bankroll a team to enter Harlem’s Rucker Classic street ball Tournament, eyeing
the 100,000 cash prizes awarded to the winner of the tournament. This money
seems like a sure bet – Dax has the best local player around, a player that can
easily carry his team to a tournament championship, on his team. That’s where
Dax’s longtime rival Mookie (Nick Kroll) comes in and throws a wrench in his
plans, stealing Casper and the rest of the team away from Dax. To add fuel to
the fire, Dax’s girlfriend Jess (Tiffany Haddish), has had enough of Dax’s
excuses and kicks him out. Down on his luck, Dax happens to stumble upon a
court where Uncle Drew puts a young-blood in his place with some dazzling shots
and moves. Dax convinces Drew to play in the tournament and teach the
young-bloods the right way to play the game, but Drew demands that he assembles
the roster. This leads Dax and Drew to hop into his 70s era van and round up
his old team made up of Preacher (Chris Webber) – who is now actually a
preacher and must run away from his wife Betty Lou (Lisa Leslie) to join in on
the fun, Lights Out (Reggie Miller) – a near blind sharp shooter, Boots (Nate
Robinson) – a wheelchair bound grandfather, and Big Fella (Shaquille O’Neal) – a dojo
master who has some unresolved beef with Uncle Drew. The entire crew, along
with Boots’ granddaughter Maya (Erica Ash) hop in the van and make their way to
Harlem to try and finally capture the Rucker championship by playing basketball
the way it is meant to be played. 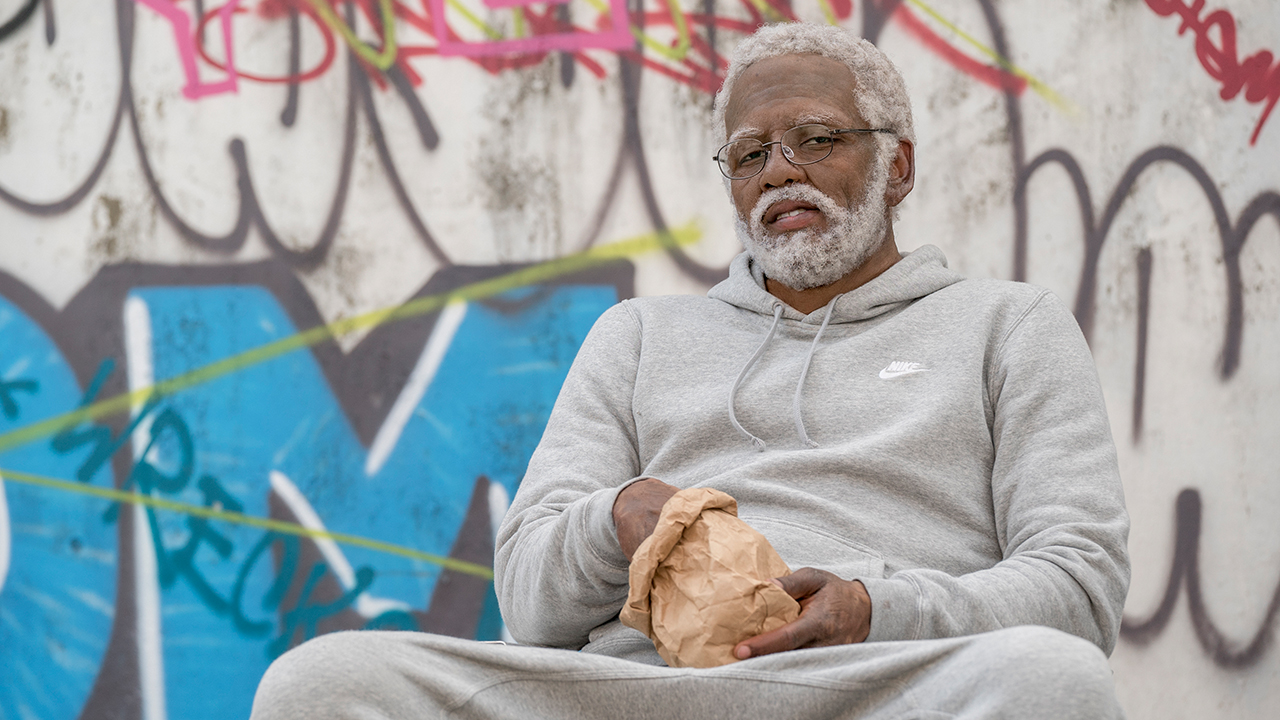 Yes, it’s true, a character we all saw in some hilarious
extended Pepsi commercials has his own film depicting his antics. And no, it is
not a terrible flick –far from it. The Pepsi commercials were all written and
directed by Kyrie himself, but the film has Charles Stone III directing and Jay
Longino writing. Full disclosure, I am a big basketball fan, so seeing some of
my favorite players from the past letting loose was a joy for me. Right off the
bat, Uncle Drew gets going with the
hilarity and cameos – a fake 30 for 30 montage gives us a glimpse of the
history of Rucker Park and how Uncle Drew and his team had an impact in shaping
that history. Uncle Drew has plenty
of basketball jokes throughout that poke fun at players and past events that
hoopheads will love, but there is so much other ridiculousness that you don’t
need to be well versed in basketball to enjoy yourself. This movie is wild,
full of clichés, and is awfully predictable – but it has many moments that left
the audience roaring in laughter. Numerous times I kept thinking that the film
reminded me of Dodgeball, and just
like Dodgeball, if you want to turn
your brain off and just laugh for an hour and a half, I would strap on your
Nikes and check out Uncle Drew.