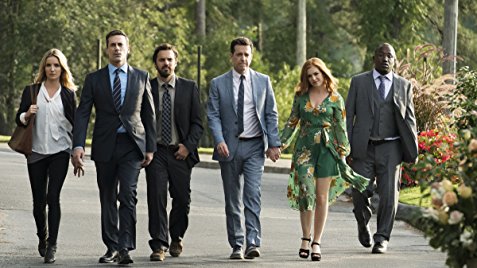 If there can be professional kickball leagues out there keeping us adults from growing up too much, surely there can be a movement for the game of tag. At least I hope that’s what is inspired by the falling-down hilarious comedy Tag, a too-goofy-to-be-believed gem about a bunch of friends who have been playing the same game of tag for thirty years. Nowhere is safe; funerals, wedding, hospital rooms, all are fair game. While based on a true story, the movie is little more than an excuse to watch Jon Hamm, Ed Helms, Hannibal Buress, and Jake Johnson crash and burn repeatedly in an attempt to lay a hand on Jeremy Renner. And you know what? If all you get out of it is laughing at their many pratfalls, that will be enough to make this a game worth playing.

As if that cast isn’t good enough, there is at least one more who hasn’t gotten much due in the trailers: Isla Fisher. The crimson-haired actress steals nearly every scene from her male counterparts, and she isn’t even technically part of the game, just the all-too-aggressive wife of Hoagie (Ed Helms) who kicks things off by leaving his successful veterinarian practice so to apply for a menial custodian job. Why? Because it gets him closer to Bob (Hamm), CEO of a “Fortune 800” insurance company, so he can tag him. Hoagie disrupts Bob’s interview with Wall Street Journal reporter Rebecca (Annabelle Wallis), who decides to chuck her boring corporate puff piece for the real story of these grown men still engaged in a kid’s game.

Hoagie and Bob recruit their far-out stoner pal Chilli (Johnson), or should we say they hunt him down while he scrambles like a spooked deer, afraid of being tagged “It”. After he suffers an epic tumble they bust in on the therapy session of their paranoid pal Kevin (Buress), and together the foursome make this the year they vow to tag Jerry (Renner), a sort-of tag zen master who has never been “it” in all of their years of playing. With Jerry on the verge of getting married to bridezilla Susan (Leslie Bibb), who is no fan of their eternal game of tag, they figure now is the best and last shot they may have to finally beat him.

The problem is that Jerry is on some whole other shit. If they’re playing checkers, Jerry is playing 3-D chess. Their attempts to tag him are futile, like Neo when he first tried to punch Morpheus. He bobs, weaves, zigs, zags, and occasionally lays elaborate traps to avoid them. Director Jeff Tomsic, best known for being at the helm of various comedy specials, uses slow motion and other camera tricks to exaggerate their embarrassing efforts. The best is a chest cam to fully capture Chilli’s drug-induced mania while flailing miserably to tag Jerry.

Most obsessed to win is poor, awkward Hoagie who has an extra incentive this year and the competitive rage of his wife (Fisher) to fuel him. Helms is playing the character he’s been reliably counted on to play for years, while Hamm’s macho cool only makes it funnier as Renner makes him look foolish. Meanwhile, the best lines are reserved for the screaming Fisher and Buress as her polar opposite. While she pops a ginger gasket at Jerry’s constant escapes, it’s Buress who calmly observes how absurd the whole thing is.

Renner stays passively above the fray compared to the wild antics of his co-stars, which is interesting because he famously busted up both arms while shooting. He managed to stay injury free during those Avengers movies but in Tag he comes up lame, but you’ll never be able to tell that his arms are actually CGI in some places. A love triangle romance that includes Rashida Jones as a former flame to Hamm and Johnson’s characters doesn’t amount to much and feels tacked on, so does a hospital bed revelation that delivers a somber gut punch to the comic antics. The film works best when it avoids too much sentimentality, but the camaraderie among the guys is so tight you won’t mind their frequently-recited message,  “We don’t stop playing because we grow old, we grow old because we stop playing.”

Tag is a movie about best friends doing whatever it takes to stay in one another’s lives. Of course it’s incredibly silly but also has a surprising amount of heart, and you’ll think of your own friends and how important they are, as long as they’re “it” and not you.