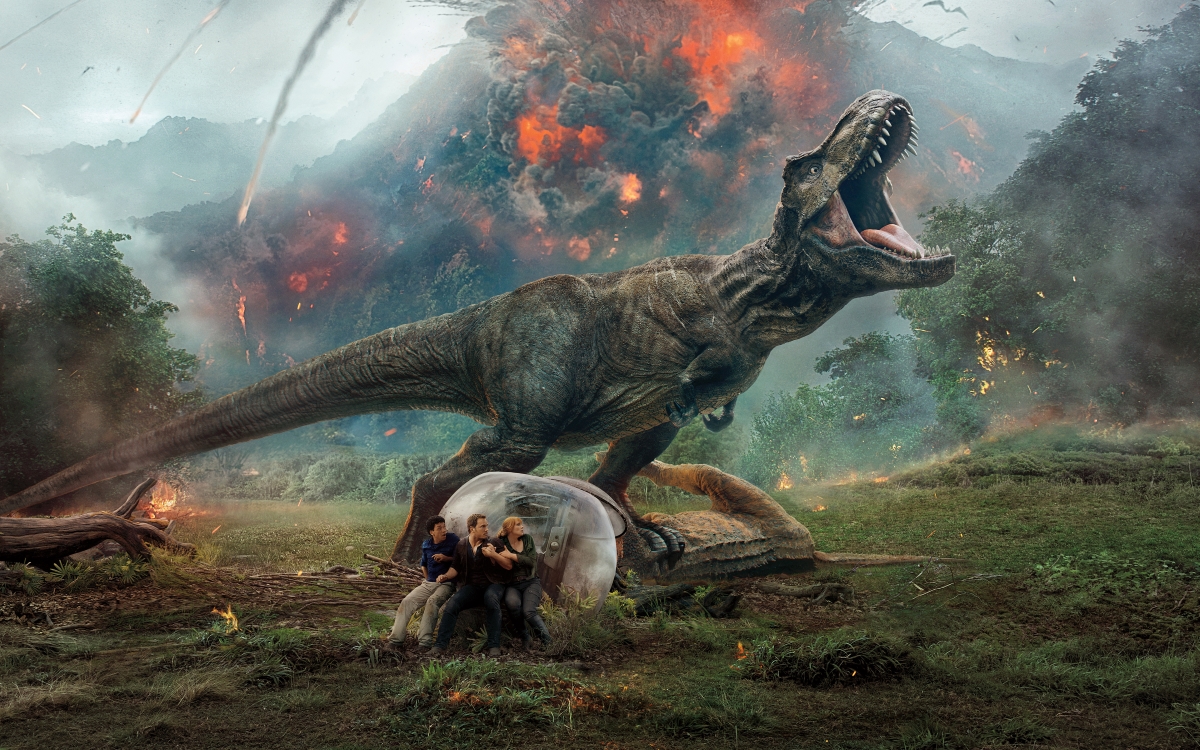 For a franchise that revolves around the idea of evolution, Jurassic World: Fallen Kingdom reveals that it is still very much stuck in amber. 2015’s Jurassic World was predictably crowd-pleasing in its monstrous dino-effects and shapeless in terms of an actual plot. Two decades since the original Jurassic Park movies had ended, the revival’s $1B+ box office wasn’t going to inspire Universal to change much for its sequel, but they made the killer move of hiring talented director J.A. Bayona, he of disaster film The Impossible and horror The Orphanage, as an upgrade to Trevorrow’s middling direction. And while the action has been given a serious upgrade for the sequel, it’s Trevorrrow’s lousy screenplay that has this Fallen Kingdom sunk in the mud.

A reason why I don’t buy into the hype from filmmakers about their upcoming blockbusters is put on display in Fallen Kingdom. Trevorrow waxed grandiose about his plans for the film, talking about “open source dinosaurs” and other such nonsense that would broaden this franchise’s scope. None of that plays out at all, and what we get is a middling thriller that *shocker* reveals that the homemade dinosaurs of Jurassic Park are being exploited for profit. Whhhaaaaa?? You don’t say? Hasn’t that been a core theme since the beginning? Oh, and the dinosaurs find themselves relocated in a way that has some very familiar echoes. This is a “been there, done that” situation if there ever was one.

And yet the choreographed set pieces are off the charts incredible thanks to Bayona, and a cast who are accustomed to diving away from gnashing teeth and fangs. A few years have passed since the last movie’s conclusion, which saw over $800M in payouts to victims of the dinosaur crisis, and now Isla Nublar is on the verge of becoming a smoldering ruin due to an exploding volcano. While politicians bluster and animal rights groups gather, Claire (Bryce Dallas Howard) is approached by a wealthy benefactor to help lead a mission to rescue the dinosaurs from the island. She’s tasked with recruiting beefcake animal behaviorist Owen (Chris Pratt) to lead the way and help rescue Blue, the intelligent velociraptor he helped raise since “birth”. Joined by snarky paleo-veterinarian Zia (Daniella Pineda) and dorky tech dude Franklin (Justice Smith), Claire and Owen’s rescue soon goes belly up because, you guessed it, humans suck and can’t be trusted. They’re far more dangerous than dinosaurs, which is saying something because they are stampeding everywhere to try and escape the island before it becomes slag.

Anything outside of a life-or-death situation is rendered emotionless and dull by Trevorrow and co-writer Derek Connolly’s script. They manage to make the appearance by the aforementioned Ian Malcolm seem perfunctory rather than a reason for nostalgic bliss. Tonally all over the map, it’s also impossible to figure out just how high the stakes are. Dinosaurs being sold to the highest bidder? Bad idea. But the comical way in which that case is made, with a room full of Russian mobsters, shady arms dealers, and wealthy fat cats having an auction like an episode of Storage Wars is ridiculous. Plus, there is a super important, human race-shattering reveal that involves someone close to original Park founder Benjamin Lockwood (James Cromwell) that is given nary a second thought when it should be the basis of an entire movie.  It’s hard to figure out what this movie’s priorities are, exactly. Should we be concerned whether dinosaurs go extinct again? Concerned they’ll fall in the wrong hands? Worried they’ll make humans extinct in the process? Fearful of an out of control evolutionary process? All of these issues are brought up and dumped sideways like one of those Jurassic Park tour cars at a T-Rex’s nudging.

Fortunately, Bayona’s horror sensibilities save the day, and he has no doubts about the kind of movie he’s trying to make. Bringing a much darker touch than Trevorrow could ever hope to, he pulls from classic genre to compose some terrifying scenes of dinosaur mayhem. The best finds a new souped-up dinosaur lurking in a young girl’s bedroom, its silhouette against the light of the moon like a feral wolfman. It’s Bayona’s moodier touches that add a depth to the necessary abundance of CGI, making this the scariest Jurassic movie by far. I’d be happy with seeing the entire franchise go off in a horror direction, leaving all the philosophizing claptrap behind.

I do like the semi-evolution seen in both Owen and Claire. Not that she was helpless in the first movie but she’s definitely more confident (and sans high heels!!) this time around. Owen seems to have softened up some of his rougher edges. He doesn’t get as many heroic moments this time, but that may be because this is a smaller movie with less people to chase around and save. He’s only got a dinosaur to look after and Blue is pretty self-sufficient.

Maybe it’s unfair to say Jurassic World: Fallen Kingdom is stuck in amber. That would imply that it’s merely stagnant, when the franchise has very clearly taken a step backwards. With some amazing, gigantic visuals and a cast we already love, it is still undeniably entertaining and will rock the worlds of its share of audiences. But we’re seeing diminishing returns, and the awe we once felt over these movies is fading fast.