The Debt Collector
follows French (Scott Adkins), a Martial Arts expert who is in a financial
bind. French owns a gym in Los Angeles, but is having trouble making ends meet,
so he decides to take on some extra work to boost his income. French convinces
his friend Alex (Michael Paré) to put him in touch with a local mobster Tommy
(Vladimir Kulich). Tommy agrees to add French to his payroll as one of his debt
collectors. Tommy has a lot of people all over town who owe him money, and what
better way to get them to pay than have a trained martial artist stopping by
and sending a message from Tommy. Tommy pairs French up with Sue (Louis
Mandylor) a debt collector who has been on the job for quite some time. Sue has
seen it all and has a very negative view of the world to go along with a
healthy drinking habit, things he claims will both be in French’s immediate
future. 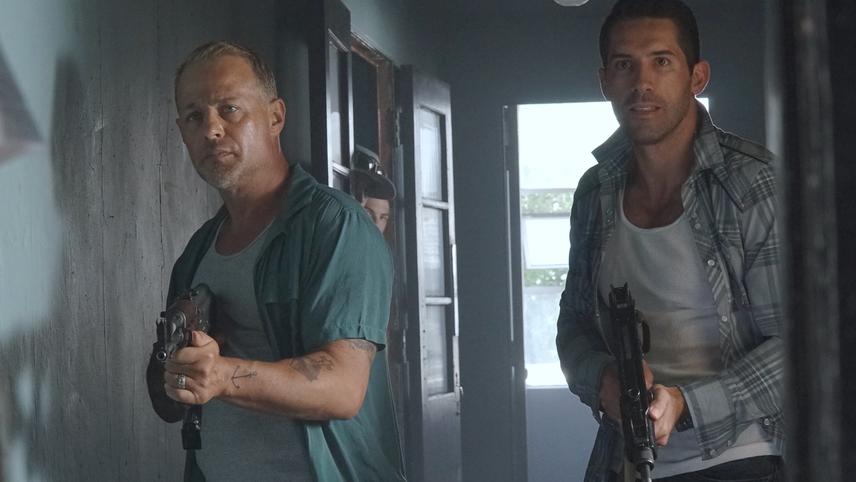 The Debt Collector
is essentially a mix between a buddy cop (or robber) comedy and Training Day. Sue shows French the
ropes, teaching him little rules that can help him survive in the cruel and
seedy world of the mob. French struggles with the fact that he is inherently a
good person, no matter how much negativity Sue tries to project on him. The Debt Collector is full of action as
French and Sue go from stop to stop collecting Tommy’s money. Every person they
visit seems to have a large bodyguard or two itching to get into a brawl. Luckily
Sue is a retired boxer and French is a former soldier who is now a martial arts
expert, making them a formidable team.
The film is a hard R with cursing, nudity, blood, and
violence throughout. The highlights of the movie, other than the fighting
scenes, come from the interactions between Sue and French. Adkins and Mandylor
have solid chemistry and writer/director Jesse V. Johnson has created great
dialogue between the two characters. The
Debt Collector does not have a lot of substance and there is virtually no
character development – we are just thrown into action from the jump – but the
film is full of mindless action. If you are looking for a movie you can sit
back, turn your brain off, and just enjoy the ride, then The Debt Collector is for you.
Rating: 2.5 out of 5