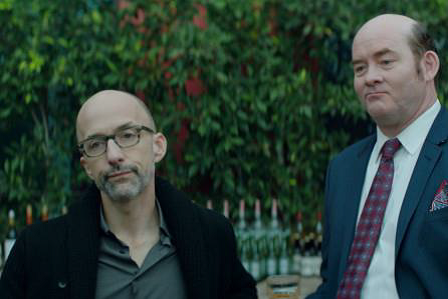 Have you ever wondered what happened to some of the friends
you had – maybe from high school, or college, or even as a young adult that you
just fell out of touch with? What their lives may be like now, what kind of
person they have become – or maybe even to give you clarity on how much you may
have changed yourself. Bernard and Huey
explores this idea by reuniting two friends after twenty five years apart.
Bernard (Jim Rash) used to be shy and down on his lady luck, always turning to
Huey (David Koechner) for advice and to beg him to set him up with woman that
Huey had already been with and lost interest in. Bernard is now an associate
publisher living in a great bachelor pad in New York City and has blossomed
into quite the ladies’ man. Huey – who in his mid-20s had a black book that was
overflowing with women from all over the city that he could barely keep track of
– is now overweight, in a funk, and hiding from his wife and child that he ran
out on. One day Huey shows up at Bernard’s door, and after more than two decades, Bernard hardly even recognizes the man standing in front of him anymore.
Begrudgingly, Bernard allows Huey to stay with him, although Huey didn’t really give him a choice. Huey inserts himself into all aspects of Bernard’s life, and the
perfect balance that Bernard has created seems to be breaking down around him.
His playboy style seems to become even more jeopardized when he is introduced
to Huey’s daughter Zelda (Mae Whitman) and begins to develop feelings for her. As Bernard begins slipping back to his old ways, Huey gains some of his confidence and swagger back. If the two friends are going to be in each other’s lives, does that mean they have to revert back to the way it used to be? 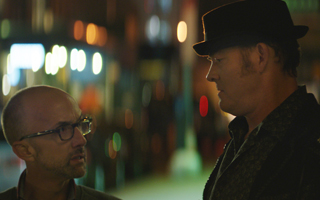 The film is based on a script penned by Oscar and Pulitzer Prize
winning cartoonist and screenwriter Jules Feiffer. Interestingly enough the
characters in the center of the story were created in 1957, but their
experiences and growth are still believable and relatable to this day. We all
know someone who was a late bloomer, finally bursting out of that awkward shell
they were in in high school and early adulthood. On the other hand, you don’t need
to search high and low to find someone who peaked in their 20s, with life and
those decisions forged in early adulthood not being too kind to them later on. Bernard
and Huey shows how friendships can evolve as people age. With intertwining story
lines from their youth and present day, director Dan Mirvish is able to
highlight how much each of these characters has changed over the years and how
much them being back in each other’s lives can affect who they are now. Bernard and Huey is well written, with
terrific dialogue and decent humor throughout. The film touches on some
interesting aspects and really makes you reflect on who you were and who you
have become now. It is a fun film that will be enjoyable for most.
Rating: 3 out of 5