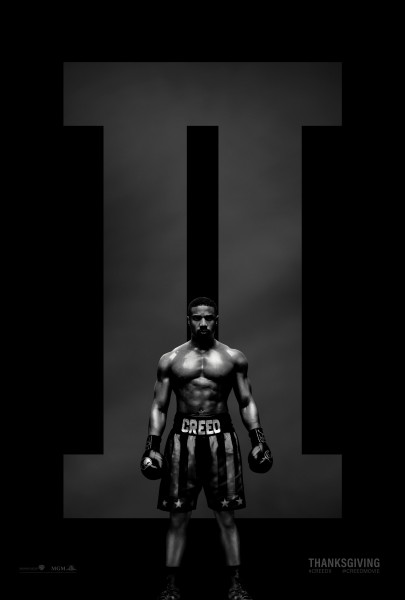 Michael B. Jordan was just coming into his own as a major star when 2015’s Creed hit, but now three years later he’s arguably the biggest name in the upcoming sequel, Creed 2. And that’s saying something since he’s once again sharing screen time with a legend like Sylvester Stallone. Tomorrow the trailer for the anticipated boxing sequel will arrive, but today brings the first poster and the movie’s synopsis which teases a battle for the ages.

The poster you can see above, featuring Jordan as Adonis Creed, the son of Rocky Balboa’s friend and rival, Apollo Creed. Stallone returns as Rocky, with Tessa Thompson also reprising her role from the first movie. Making his comeback to the franchise is Dolph Lundgren as Ivan Drago, with the storyline expecting to include a fight between his son and Adonis. Here’s the synopsis:

Life has become a balancing act for Adonis Creed. Between personal obligations and training for his next big fight, he is up against the challenge of his life. Facing an opponent with ties to his family’s past only intensifies his impending battle in the ring. Rocky Balboa is there by his side through it all and, together, Rocky and Adonis will confront their shared legacy, question what’s worth fighting for, and discover that nothing’s more important than family. Creed II is about going back to basics to rediscover what made you a champion in the first place, and remembering that, no matter where you go, you can’t escape your history.