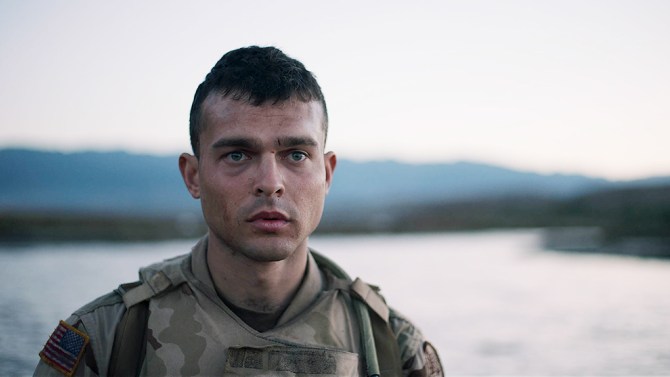 *NOTE- This is a reprint of Mae’s review from the 2017 Sundance Film Festival. The Yellow Birds is available now exclusively on DirecTV and will hit theaters in June.*

I’m always conflicted about war movies. Sometimes, they seek only to glorify heroism and are entirely too self-righteous, while other times they explore very humanistic themes amid crises. Based on the novel by Kevin Powers, The Yellow Birds journeys through nonlinear storytelling about the toll of war and a mystery of a soldier’s disappearance. Its narrative is grim and there are moral questions that play a big part in the story, especially in the end. However, the film often seems to want to dole out the pain without follow-up and spends far too much time on its mystery and lacks any authentic emotional follow-through.

Told in three different chapters–before, during, and after deployment–The Yellow Birds follows Brandon Bartle (Alden Ehrenreich) as he navigates his way through his time in the Iraq war. He’s a troubled young man who doesn’t have a stable relationship with his mother (Toni Collette). Before being deployed, he befriends an optimistic teen, Daniel “Murph” Murphy (Tye Sheridan) and, under the guidance of Sergeant Sterling (Jack Huston), they are sent to Iraq for war. Bartle watches as Murph attitude changes from hopeful to despondent the longer they are there; but it’s one tragedy that eventually drives him over the edge.

Later, Murph’s mother, Maureen (Jennifer Aniston), receives the news that her son is missing. With Bartle and Sergeant Sterling having returned from overseas, Maureen seeks out answers regarding what happened to her son. Bartle, having promised that he would be the one to tell should anything happen to Murph, won’t see her. As the story unfolds, the mystery of what happened to Murph is found out and Bartle struggles to deal with it and face the truth of what happened.

Director Alexandre Moors (Blue Caprice) loves to explore the darkness in situations. In this case, it’s the darkness of war and how its heavy weight can scar even the most hopeful of people. One of the primary issues with the film is that it chooses to focus more if its story on Bartle while Murph becomes a pawn for Bartle’s pain. Bartle is a character we’ve seen often enough: Broken and emotionally empty with a hard exterior. There is no real connection the audience can feel for him and I found myself wanting the narrative to further develop Murph. A young man who hasn’t yet been tarnished by life and comes from a loving household only to eventually be traumatized by war is a far more interesting angle.

The Yellow Birds focuses too much on the mystery and watching Bartle emote to the point that a large chunk of the film feels devoid of much else. The story leads us to believe that Bartle and Sergeant Sterling were accomplices in the disappearance of Murph, so much so that the reveal in the film’s finale falls flat and doesn’t quite have the emotional resonance that it should have carried. Jennifer Aniston and Toni Collette’s characters are especially short-changed and not given enough to do, which is a waste of both actresses’ talents. Although the cinematography is beautiful and the film has a lot of potential, it’s far too slowly paced and doesn’t have enough depth for the heavy material it takes on.