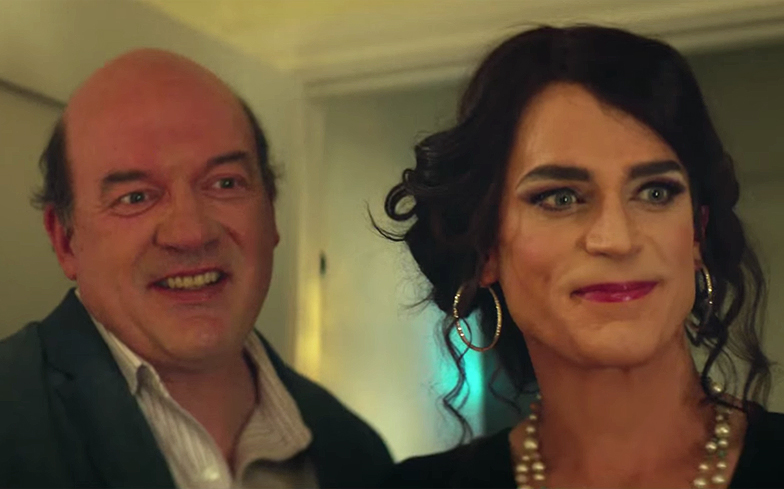 I was nervous going into Anything. The story focuses on Early (John Carroll Lynch), who moves from Mississippi to Los Angeles after attempting suicide following his wife’s death, and his life changes when he meets his neighbor Freda (Matt Bomer), a trans sex worker. Not only was storyline rife with the potential for the manic pixie dream girl trope, but I’ve been hearing about the problematic nature of casting a man to play a trans character since the casting announcement was made.  I want to see more trans actors playing trans characters in TV and film, and having men playing trans women does support inaccurate stereotypes about trans women. That being said, I think that Bomer did a great job playing Freda and bringing nuance to her character, even though she remains a bit of a stereotype as a tough-and-sassy trans woman.

Lynch’s performance is really what sells this movie. Early is immediately endearing, from the moment we watch him set out clothes for his wife on the morning of her funeral, as he must have been doing for his entire marriage, to watching him explore Los Angeles as a fish out of water from the deep, deep South, to watching him read letters his wife sent to him when she was in high school and he was in college aloud. He brings an incredible amount of emotion to Early, who is grappling with grief and trying to figure out how to appreciate his sister’s neurotic brand of love and care and nurturing relationships with the eclectic neighbors in his LA apartment building. I haven’t seen much of Lynch’s work before but I am definitely looking forward to seeing more of it after his performance in Anything.
There’s a somewhat loose thread of a storyline revolving around Early’s new neighbor, Brianna (Margot Bingham), whose situation is unclear but has an addict musician womanizing boyfriend, a guitar, and a beautiful voice. She attempts to pass off a gives no f*cks attitude but earnest Early gets to her and she starts to admit to him and to herself that she does care about things and is unhappy. However, we don’t see much resolution with this storyline and I was sad about it. I would have liked to see more development here or have less time spent here; the in-between amount of time spent with Brianna and her boyfriend felt like a tease.
I wasn’t sure what to expect watching this movie, but it definitely exceeded expectations. There was a lot of potential to explore characters and their relationships and their pasts but I think that’s a testament to the storytelling done that I was so attached to these characters and wanted to learn more about them. But I do hope in the future, as we continue to make progress with portraying underrepresented groups better in the media, that we cast more underrepresented actors to play these characters.
Rating: 4 out of 5