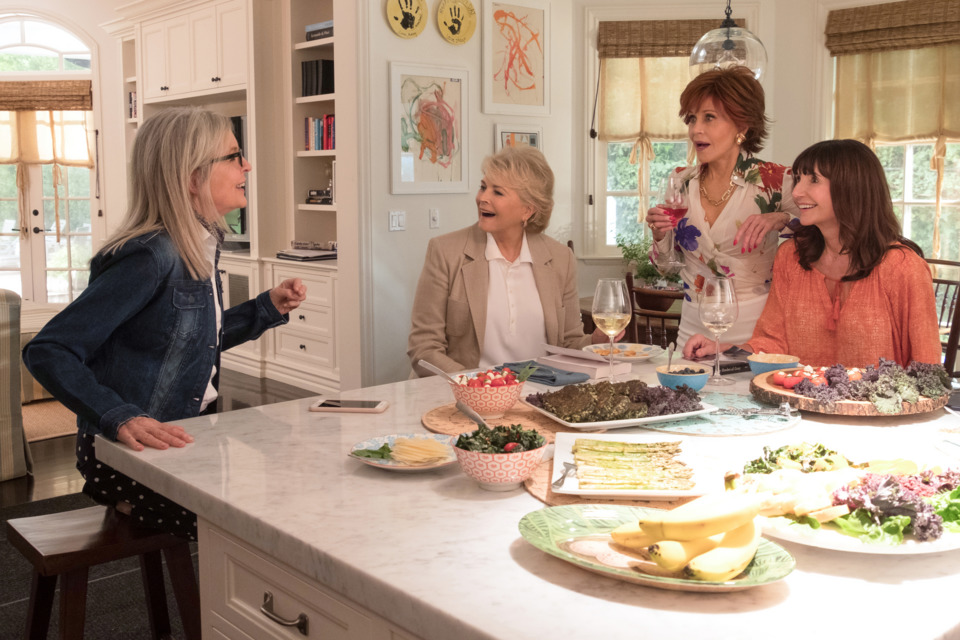 Never having been in a book club before I’ve always assumed they weren’t really about reading books, but about finding one more reason to drink wine and gossip.  My assumptions were proven accurate by the new rom-com for women of a certain age, Book Club, which features a gaggle of screen legends enjoying the grape’s benefits while chatting about their love lives. Like a slightly more hip (no broken hip jokes, please!) The Golden Girls, this fearsome foursome find laughs in their various romantic encounters inspired by that most literary of works, Fifty Shades of Grey.

If the thought of four older women getting hot ‘n bothered at the thought of Mr. Grey makes you queasy then chances are this isn’t your bag. But we are talking about Jane Fonda, Diane Keaton, Mary Steenburgen, and Candice Bergen here; if they can’t sell this slightly raunchy trip into Nancy Meyers territory then nobody can. While the romance is strictly of the Sex and the City variety, it’s hard to escape the feeling that these ladies are just having a ball in one another’s rarified company. And I’m fairly sure that’s real chardonnay in those glasses, just sayin’.

Fonda plays Vivian, the group’s resident Blanche Devereau, a buxom and very wealthy hotelier who has spent her life free from commitment but not suitors. Diane Keaton is recent widower Diane (Hey, who’s gonna forget that?), who just wants to be left to live her life despite the objections of her helicopter daughters (Katie Aselton and Alicia Silverstone, both deserve better) who want her to move closer to them. Bergen is stiff-as-a-gavel federal judge Sharon, who has been reluctant to get back into the dating pool since her divorce years earlier. Steenburgen is the spring chicken of the bunch as Carol, a talented chef who still has the hots for her husband (Craig T. Nelson) after many years together, but lately can’t seem to get his motor running.

All four women are relatively happy but too comfortable, which is why the always-randy Vivian suggests they get acquainted with E.L. James’ bestseller that was written exactly for women like them. “We shouldn’t be doing this at our age”, one says, but of course it’s definitely what they should be doing to prove that it’s never too late to bring passion into your life. I’m not sure Fifty Shades is the best vehicle to discover that lesson, but over the course of reading the entire trilogy (Yes they make it through all three books!!!) they all begin to experience the finer things. And no, none of it involves BDSM, S&M, or even AARP. Diane gets a genuinely sweet romance with a handsome airline pilot (Andy Garcia), a bachelor looking to settle down with the right woman. Vivian reconnects with an old flame (Don Johnson) and tangles with some of the bad choices she made out of fear. Carol, after a predictable Viagra mishap, has to learn to appreciate her husband for more than sex.

The best stuff is saved for Bergen’s Sharon, who braves the rigors of modern technology and the online dating scene. Bergen remains a treasure, and her clumsy attempts to create a Bumble profile pic are hilarious. They get her back out there on the prowl and into the trousers of Richard Dreyfuss and Wallace Shawn, who should be so lucky.

None of the various storylines gets enough time to mature, and some of the sight gags are so corny they should be served with movie butter. An example finds the gardening Carol’s water meter reach “moist” while reading Fifty Shades’ steamy pages. Plenty of jokes about safe words, bondage, and an unfortunate conversation about Spanx are hit or miss. It should be noted that at the screening I attended the audience howled most at the cheap stuff, suggesting maybe they had gotten into the rosé beforehand.  It would be easy to pick at the extreme amount of privilege these ladies share, but what fun is that when you’ve got Bergen and Dreyfuss stumbling out of a backseat with their trousers to the wind?

Director and co-writer Bill Holderman, known for Robert Redford pics All is Lost and A Walk in the Woods, is smart enough to back off and let his ladies lead the way. The demographic they’re reaching out to is one Hollywood too often ignores, so much so they didn’t think to open it on Mother’s Day weekend. For them, Book Club should prove to be just the right vintage.